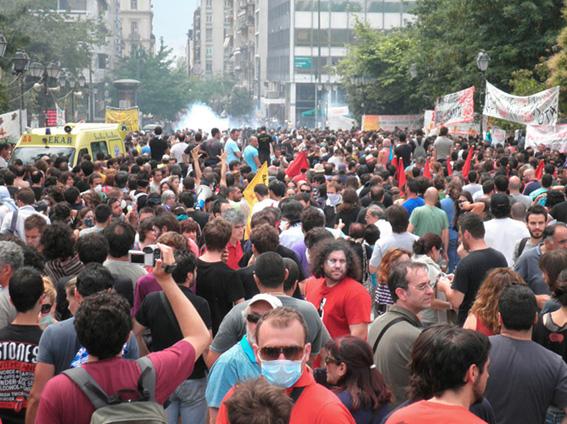 Greece on the Verge

On the verge of default, Greece is caught between an unpopular austerity package and a popular revolt.
By Kia Mistilis | June 29, 2011 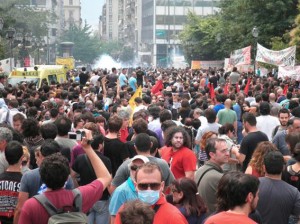 The speaker is a young woman, her tone calm. “This is our Square,” she says. “We are here in large numbers, we have been here since May 25 and we are not leaving. Stay calm and stand firm. We will occupy this space until they leave office.”

The place is not the Arab world but the heart of Europe: Syntagma Square in central Athens. The date is June 15, and demonstrations have filled the squares of cities and towns across the country. The mood is peaceful but determined, as if a critical mass has been reached and there is no going back.

The battle between a growing people’s movement and the Greek government is reaching a climax with a June 30 deadline to approve the medium-term austerity program set by the troika: the International Monetary Fund, European Union, and the European Central Bank. The program includes measures to slash 150,000 public sector jobs, further cut wages and pensions, increase taxes, and privatize key national assets at fire-sale prices. One woman told the BBC on June 15 “They may have agreed to sell the Acropolis and we wouldn’t know.”

On June 29, the Greek parliament ignored the huge protests in Syntagma Square and approved the austerity program. But the Greek movement that has emerged to challenge this unpopular loan package is not going away.

Although many Greeks were willing to accept the necessity of addressing the national debt, they reject the IMF approach of socializing the losses and privatizing the gains, which puts the burden of unsustainable debt repayment squarely on the people. Even if Greece doesn’t default, and it almost certainly will, its debt will be 120 percent of its gross domestic product by 2020. Epaminondas Marias, associate professor at the University of Crete, argues that such a national debt is clearly unsustainable at a 16 percent interest rate, compared with 6.2 percent before the bailout.

The austerity measures, conditional with the loans, are so severe that they have produced a deepening social crisis. And the worst is yet to come. Since the bailout was introduced in May 2010, unemployment has risen 40 percent bringing the national rate to 16 percent and 42.5 percent for youth. The basic wage has been cut from 700 to 550 euro per month, the sales taxes rose to 23 percent, and the economy shrank 4.5 percent. –

The Greek protest movement, formerly energized by leftist parties and trade unions, morphed into a people’s movement galvanized by opposition to the severe austerity imposed by the troika of foreign lenders. Three weeks of peaceful protests leading up to June 15 general strike marked a watershed in Greek history: not only did crowds gather in central Athens day and night in numbers upwards of 250,0000, peaking at 500,000 on June 12, the demonstrations were consciously unaffiliated politically and a magnet for thousands of first-time demonstrators, from young children to grandparents.

The change was partly catalyzed by the Indignados (Indignants) of Spain, whose call to action sparked a wave of anti-austerity demonstrations, bringing hundreds and thousands of people to the public squares of Madrid and Barcelona from May 15. These protests quickly spread to Greece via Facebook and the Indignados’ challenge to their Mediterranean cousins: “The Greeks are sleeping.”

Greece has answered with peaceful mass demonstrations and Real-Democracy: a direct democracy group that set up a protest camp in Syntagma Square on May 24 to provide organization, support, and headquarters for the anti-troika movement. Syntagma Square has become transformed in the last month. Tents and makeshift kitchens now fill the grassy areas shaded by citrus trees – formerly the sole territory of Athens’ stray dogs — while the pathways between the campsites host a multimedia center, a welcome and information stall, a camp of artists and musicians, and a first-aid area staffed by doctors, nurses, psychologists, and psychiatrists.

Non-political banners of resistance from many perspectives in several European languages extend from the parliament through the square. Every day there’s a buzz of activity. Through public forums and meetings, people from all walks of life gather and participate, hungry for the opportunity to create real and lasting change. These days, Syntagma Square has a tangible feeling of a broad-based European people’s movement taking root. And the organizing focused on blocking the vote on the austerity program at the end of June.

The general strike of June 15 came on the heels of three weeks of mass demonstrations that brought at least 250,000 protesters into central Athens, including Syntagma Square, the parliament, and surrounding streets. The majority of protesters are Greek, with a small minority of Spanish, Portuguese, and Italian protesters, and Middle Eastern and North African immigrants and asylum seekers.

Just as I witnessed at the general strike on February 23, riot police used excessive amounts of tear gas to clear large, peaceful crowds from the Parliament and Syntagma Square. On June 15, with central Athens jam packed, police unleashed tear gas without warning outside the Finance Ministry, and it quickly spread into the packed crowd. The air in Syntagma Square was soon thick with clouds of toxic fumes — included asphyxiant gas, which severely inhibits breathing – and the explosive sounds of stun grenades.

Veteran protesters accustomed to the chemical effects of tear and asphyxiant gas assisted thousands of their newly initiated fellow citizens with on-the-spot first aid. The antidote of choice is Maalox – a milky coloured liquid ant-acid solution applied to the face by hand or spray bottle. Once dry, it provides a barrier to the burning effects of tear gas. For five hours, “Maalox teams” treated hundreds of people escaping the gas in physical distress. A first-aid volunteer later told me she felt overwhelmed when riot police threw two tear gas canisters directly into the first aid area, in full view of the sign, forcing an evacuation. The worst affected were transferred to hospital, or carried by stretcher into the Syntagma metro station, which became a triage station and temporary refuge for thousands of protesters who refused to be intimidated into leaving the square altogether.

The morning of June 15: You know a government’s in trouble when the prime minister and his lawmakers turn up to parliament accompanied by a police escort of 50 armed motorcycle cops.

In the week when the Greek government threatened to collapse, Prime Minister George Papandreou was unable to form a coalition with the conservative opposition. It resorted to a cabinet re-shuffle, promoting Evangelos Venizelos who challenged Papandreou for party leadership in 2007, to rally enough support to pass a confidence motion on the medium-term austerity plan. “The country must be saved and it will be saved,” Venizelos said. “I am leaving defence to go to the real war.”

The ruling party’s parliamentary maneuvering in mid-June, dismissed as shallow international theater by many Greeks, nevertheless delayed the next loan memorandum. The government scrambled to pass the new austerity terms in the Greek parliament before the June 30 deadline.

In his speech after winning the confidence vote, Papandreou referred to the medium-term austerity programme as his “contract with the Greek people.” However, many Greeks consider the current government’s acquiescence to foreign interests at the expense of the nation’s sovereignty to be illegitimate: “We don’t have sovereignty anymore,” an Athenian woman tells me. “George Papandreou does not love Greece, and he does not represent us. This government is fake, our democracy is fake. I don’t know what will happen politically, but the troika has to go.”

A majority of Greek people oppose the troika bailout, and hundreds of thousands have continued to protest in demonstrations across the country during the last year. If it was democratically accountable, argues Mark Weisbrot in The Guardian, the Greek government would be negotiating for a better deal, and “without sovereign control of the country’s debt, the Greek people are being punished with extortion by the ECB and IMF.” The political crisis, quite obvious to Greeks, has exposed the Pasok government internationally as having weak leadership, under siege from its own people, and yet still pushing hard to pass the loan package with all austerity measures intact, as the troika demands.

The Greek public believes that the country has reached its limit of austerity. -“So, the case is not that Greeks are fighting cuts. There is nothing left to cut,” writes one Greek blogger- “The IMF filleting knife has gotten to pure, white, arthritis-afflicted bone-…Greece’s primary budget deficit is, in fact, under five billion Euros. The other 48 billion Euros are servicing the debt, including that of the first bailout, with one third being purely interest. A second loan would simply add more interest payments, and the Greek people have called their bluff.”

For the first time since 1985, Greece is experiencing a two day general strike this week, with a call out for all Greeks to come to Syntagma Square. “This plan must not pass,” proclaims the Real-Democracy movement. “We cannot allow for the looting of our social wealth, we are not willing to tolerate the degradation of the majority of the people in favour of the profits of the few.”

On June 29, the government resorted to the same strategy to push through the austerity package as it did in mid-June. Riot police again used tear gas and aggressive tactics to clear Syntagma Square of large crowds of protestors.

The bill has passed. But the Greek struggle continues.

Kia MistilisForeign Policy In Focus contributor Kia Mistilis is an independent Australian journalist and photo-journalist based in Athens, Greece.