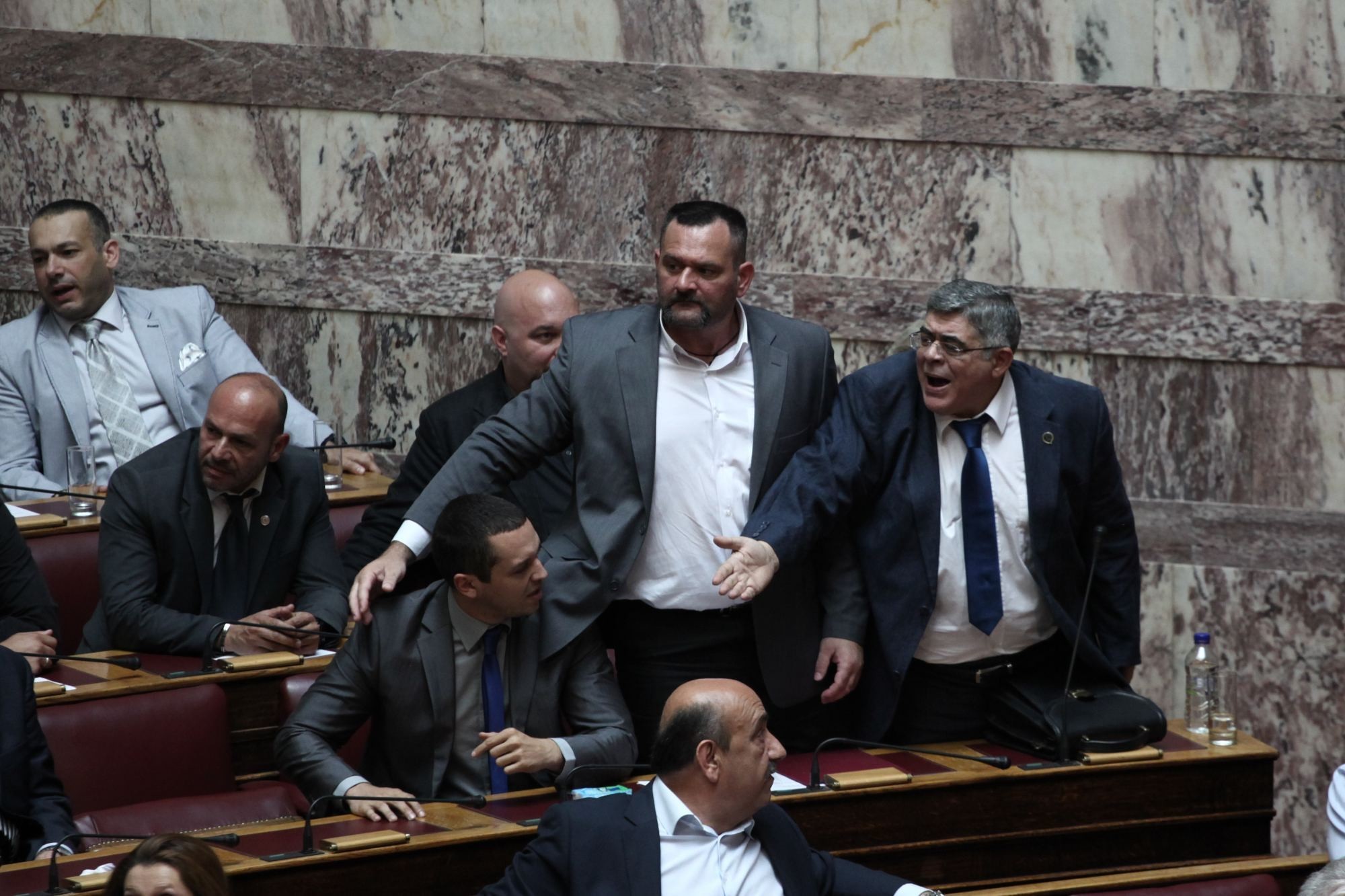 Golden Dawn is deeply rooted in the political culture of Greece.
By Conn Hallinan | March 23, 2015

When some 70 members of the neo-Nazi organization Golden Dawn go on trial sometime this spring, there will be more than street thugs and fascist ideologues in the docket, but a tangled web of influence that is likely to engulf Greece’s police, national security agency, wealthy oligarchs, and mainstream political parties. While Golden Dawn—with its holocaust denial, its swastikas, and Hitler salutes—makes it look like it inhabits the fringe, in fact the organization has roots deep in the heart of Greece’s political culture

Which is precisely what makes it so dangerous.

Golden Dawn’s penchant for violence is what led to the charge that it is a criminal organization. It is accused of several murders, as well as attacks on immigrants, leftists, and trade unionists. Raids have uncovered weapon caches. Investigators have also turned up information suggesting that the organization is closely tied to wealthy shipping owners, as well as the National Intelligence Service (EYP) and municipal police departments.

There were several warning flags about Kouzilos when he was appointed to head the intelligence division by rightwing New Democracy Prime Minister Antonis Samaras. Kouzilos is a relative of a Golden Dawn Parliament member, who is the Party’s connection to the shipping industry. Kouzilos is also close to a group of police officers in Nikea, who are currently under investigation for ties to Golden Dawn. Investigators charge that the Nikea police refused to take complaints from refugees and immigrants beaten by Party members, and the police Chief, Dimitris Giovandis, tipped off Golden Dawn about surveillance of the Party.

In handing over the results of their investigation, the lawyers said, “We believe that this information provides an overview of the long-term penetration ands activities of the Nazi criminal gang with the EYP and the police.” A report by the Office of Internal Investigation documents 130 cases where Golden Dawn worked with police.

It should hardly come as a surprise that there are close ties between the extreme right and Greek security forces. The current left-right split goes back to 1944 when the British tried to drive out the Communist Party—the backbone of the Greek resistance movement against the Nazi occupation. The split eventually led to the 1946-49 civil war when Communists and leftists fought royalists and former German collaborationists for power. However, the West saw the civil war through the eyes of the then budding Cold War, and, at Britain’s request, the U.S. pitched in on the side of the right to defeat the left. In the process of that intervention—then called the Truman Doctrine—U.S. intelligence services established close ties with the Greek military.

Those ties continued over the years that followed and were tightened once Greece joined NATO in 1952. The charge that the U.S. encouraged the 1967 fascist coup against the Greek government has never been proven, but many of the “colonels” that initiated the overthrow had close ties to the CIA and the U.S. military.

Golden Dawn was founded by some of the key people who ruled during the 1967-74 junta, and Greek dictator Georgios Papadopoulos, the leader of the “colonels” who led the 1967 coup, groomed the Party’s founder and current leader, Nikos Michaloliakos. Papadopoulos was a Nazi collaborator and served with the German “security battalions” that executed 130,000 Greek civilians during WW II. Papadopoulos was trained by the U.S. Army and recruited by the CIA. Indeed, he was the first CIA employee to govern a European country.

Golden Dawn’s adherence to Hitler, the symbols of Nazism, and the “Fuehrer principle”—investing the Party’s leader with absolute authority—is, in part, what has gotten the organization into trouble. According to an investigation by Greek Supreme Court Deputy Prosecutor Haralambos Vourliotis, Golden Dawn is split into two wings, a political wing responsible for the Party’s legal face and an operational wing for “carrying out attacks on those deemed enemies of the party.” Michaloliakos oversees both wings.

Prosecutors will try to demonstrate that attacks and murders are not the actions of individuals who happen to be members of Golden Dawn, because independent actions are a contradiction to the “Fuehrer principle.” Many of the attacks have featured leading members of Golden Dawn and, on occasion, members of Parliament. Indeed, since the leadership and core of the Party were jailed last September, attacks on non-Greeks and leftists have fallen off.

There is a cozy relationship between Golden Dawn and some business people as well, with the Party serving as sort of “Thugs-R-Us” organization. Investigators charge that shortly after two Party MPs visited the shipyards at Piraeus, a Golden Dawn gang attacked Communists who were supporting union workers. Golden Dawn also tried to set up a company union that would have resulted in lower pay and fewer benefits for shipyard workers. In return, shipping owners donated 240,000 Euros to Golden Dawn.

Journalist Dimitris Psarras, who has researched and written about Golden Dawn for decades, argues that the Party is successful not because it plays on the economic crisis, but because for years the government—both socialists and conservatives—mainstream parties, and the justice system have turned a blind eye to Golden Dawn’s growing use of force. It was the murder of Greek anti-fascist rapper/poet Pavlos Fyssas that forced the authorities to finally move on the organization. Killing North Africans was one thing, killing a Greek quite another.

Instead of challenging Golden Dawn in the last election, the New Democracy Party railed against “Marxists,” “communists” and—pulling a page from the 1946-49 civil war—“bandits.” Even the center parties, like the Greek Socialist Party (PASOK) and the new Potami Party, condemned both “left and right” as though the two were equivalent.

Golden Dawn did see its voter base shrink from the 426,025 it won in 2012, to 388,000 in the January election that brought left party Syriza to power. But then Golden Dawn is less interested in numbers than it is in wielding violence. According to Psarras, the Party’s agenda is “to create a climate of civil war, a divide where people have to choose between leftists and rightists.”

Some of the mainstream parties have eased Golden Dawn’s path by adopting the Party’s attacks on Middle East and African immigrants and Muslims, albeit at a less incendiary level. But, as Psarras points out, “Research in political science has long since showed that wherever conservative European parties adopt elements of far-right rhetoric and policy during pre-election periods, the upshot is the strengthening of the extreme far right parties.”

That certainly was the case in last year’s European Parliamentary elections, when center and right parties in France and Great Britain refused to challenge the racism and Islamophobia of right-wing parties, only to see the latter make strong showings.

According to the Supreme Court’s Vourliotis, Golden Dawn believes that “Those who do not belong to the popular community of the race are subhuman. In this category belong foreign immigrants, Roma, those who disagree with their ideas and even people with mental problems.” The Party dismisses the Holocaust: “There were no crematoria, it’s a lie. Or gas chambers,” Michaloliakos said in a 2012 national TV interview. Some 60,000 members of Greece’s Jewish population were transported and murdered in the death camps during World War II.

The trial is scheduled for April 20 but might delayed. Golden Dawn members, including Michaloliakos and many members of Parliament, were released March 18 because they can only be held for 18 months in pre-trial detention. The Party, with its ties in the business community and its “wink of the eye” relationship to New Democracy—that mainstream center right party apparently printed Golden Dawn’s election brochures—has considerable resources to fight the charges. Golden Dawn has hired more than 100 attorneys.

If convicted, Golden Dawn members could face up to 20 years in prison, but there is not a great deal of faith among the anti-fascist forces in the justice system. The courts have remained mute in the face of Golden Dawn’s increasing use of violence, and some magistrates have been accused of being sympathetic to the organization.

One of the laws the Party is being prosecuted under is Article 187, which can be a bit tricky. While Golden Dawn is charged with being a criminal organization, murder, assault, and illegal weapons possession, Article 187 kicks in when those crimes take on a political dimension and reach the level of trying to intimidate a group of people or population. But that is a slippery concept, because the prosecution will have to prove “intent.” It gives the defense plenty of gray area to work with, particularly if the defense is well financed and the courts are sympathetic.

If convicted, Golden Dawn members could face up to 20 years in prison, but there is not a great deal of faith among the anti-fascist forces in the justice system. The courts have remained mute in the face of Golden Dawn’s increasing use of violence, and some magistrates have been accused of being sympathetic to the organization. Golden Dawn is charged with being a criminal organization, murder, assault, and illegal weapons possession under Article 187.

Thanasis Kampagiannis of “Jail Golden Dawn” warns that the Party will not vanish on its own. “Many are under the impression that if we stop talking about Golden Dawn the problem will somehow disappear. That is not the case. The economic crisis has burnished the organization, but there are other causes that have contributed to its existence and prominence, such as the intensification of state repression and the institutionalization of racism by the dominant parties.”

But courts are political entities and respond to popular movements. Anti-fascists are calling on the Greeks and the international community to stay in the streets and demand that Golden Dawn be brought to justice. Germans missed that opportunity with the Nazi Party and paid a terrible price for it.

Thanks to Kia Mistilis, journalist, photographer and editor, for providing material for this column.