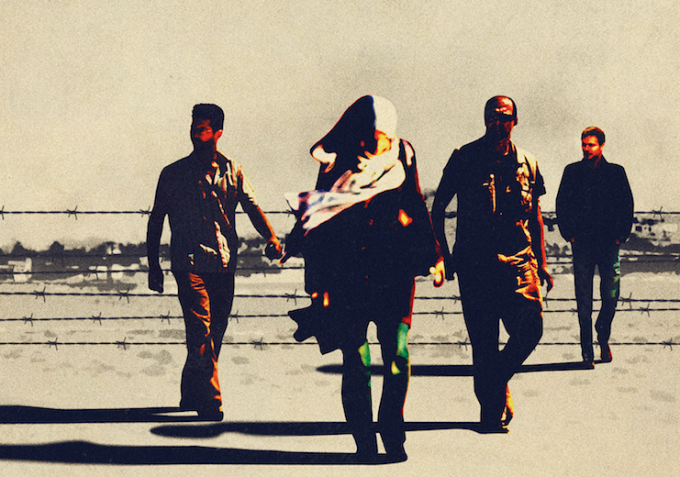 The Grit — and the Glamor — of the Human Rights Game

A new documentary offers a James Bond-like look at the trials and tribulations of globetrotting human rights investigators.
By Kaja Baum | January 7, 2015

Anna Neistat sits beside a mourning Syrian woman, in the place where it all happened, explaining her mission.

But for Neistat, a researcher from Human Rights Watch, there is a point.

Neistat is collecting accounts from numerous witnesses about events that may have been violations of human rights. If Neistat and her collaborators gather enough evidence, those events will be revealed to the world.

This is what E-Team — a new film about Human Rights Watch’s so-called “Emergencies Team” — is all about. It tells the stories of four individuals — Anna Neistat, Ole Solvang, Peter Bouckaert, and Fred Abrahams — who travel to the some of the world’s most conflict-ridden places to provide timely and reliable records of human rights violations.

Abrahams recounts being in Kosovo in 1999 to document the killing of 41 ethnic Albanians and the destruction of a village by a Serbian paramilitary. It was a story he could not wait to publish. Abrahams explains that the speedy release of these events in Kosovo altered the conversation of U.S. policy makers during a crucial period, and made Human Rights Watch realize the value of reporting on violations quickly. Thus, E-Team was born.

Likening themselves to “criminal investigators who investigate international crimes,” the filmmakers, Ross Kauffman and Katy Chevigny, seem to have taken inspiration from the E-Team concept to create a documentary-style criminal justice movie.

The movie spares no horrors as it shows images of dead children, burnt bodies, and the terrified reactions of the civilians who live in the midst of conflict. It is a credit to the camera crew that we get to witness some courageous and frankly dangerous acts. In numerous incidents, we watch as members of the E-Team, seemingly without much concern for their own safety, illegally dash across the Syrian border, document the actions of violent rebels in close proximity, rush to recent bombing sites, and walk right into a rebel camp to chastise them about their violence. It is through these events that we are brought closer to violence in a way that a brief and impersonal news clip cannot.

What makes the film’s grimmer moments more watchable is its remarkable ability to find humor in dark places. During Peter Bouckaert’s trip to Libya in 2011, for example, he comes across boxes labeled “Less Lethal Launcher.” While we wonder just what that could mean, we see Bouckeart wade through boxes piled waist high before the scene cuts to him discovering what is implied to be the “More Lethal Launcher”—the one for RPGs.

But the film goes a little too far in trying to exhibit the stark contrast between images of Syria, Kosovo, and Libya and the lives of the E-Team members. Ultimately this comes off as a distraction from the substance of their work.

Though the movie has four major characters, the filmmakers seem particularly fascinated with the married pair of Neistat and Solvang. The scenes captured in their quaint Paris apartmentof Ole playing the piano, Anna making dinner, and Anna’s 12-year-old son watching Mr. and Mrs. Smith add a jolting realism to the experience — E-Team members are, after all, real people with real lives. Yet while the focus on the couple is humanizing, it also saps some gravity and depth out of the issues at hand.

The filmmakers seem particularly interested in watching Anna apply her makeup and get dressed for various events, implying some element of glamor in the whole thing and leaving the viewer more fascinated with the lifestyle of the globetrotting couple than the atrocities they’re going to document.

These distractions, perhaps an attempt at making the whole thing easier to swallow, do lend some measure of relatability to audiences that are likely sitting in their own comfortable living rooms.

Then the scenes shift back to a different reality as filmmakers attempt to illustrate the process of traveling to conflict zones, speaking to victims, discussing how to release the information they collect, and finally assessing the impact it might have. And that’s to say nothing of the violence they scrupulously document. It looks to be an almost mind-numbing process when we are presented with only bullet-strewn execution warehouses, pillaged homes smeared in blood, truckloads of weapons, and images of entire buildings reduced to rubble. From these scenes and the emotionally rattled accounts of their witnesses, we watch the E-Team members try to put together a coherent story.

Here, after seeing the horrific consequences of these violations, the viewer can’t help but feel a mixture of helplessness and sense of purpose. It is soon coupled with frustration and a different kind of horror as the E-Team is faced with world leaders and regular people that seem determined to invalidate and deny the very crimes that we just saw the remnants of.

But the clips of Anna’s commentaries and reports to the public seem to lack the same depth and detail that is denied to the viewer. There are few statistics, numbers, or details to be heard, only the repeated insistence that human rights violations have occurred. We see the images. We hear the witnesses. But we do not fully understand the scale and impact.

This is because, before too long, the focus inevitably falls back again to the competing images of the E-Team’s personal lives. The result is a fascinating James Bond like drama that, while certainly entertaining, falls a little short of a cohesive, substantive portrayal of the far more relevant issues.