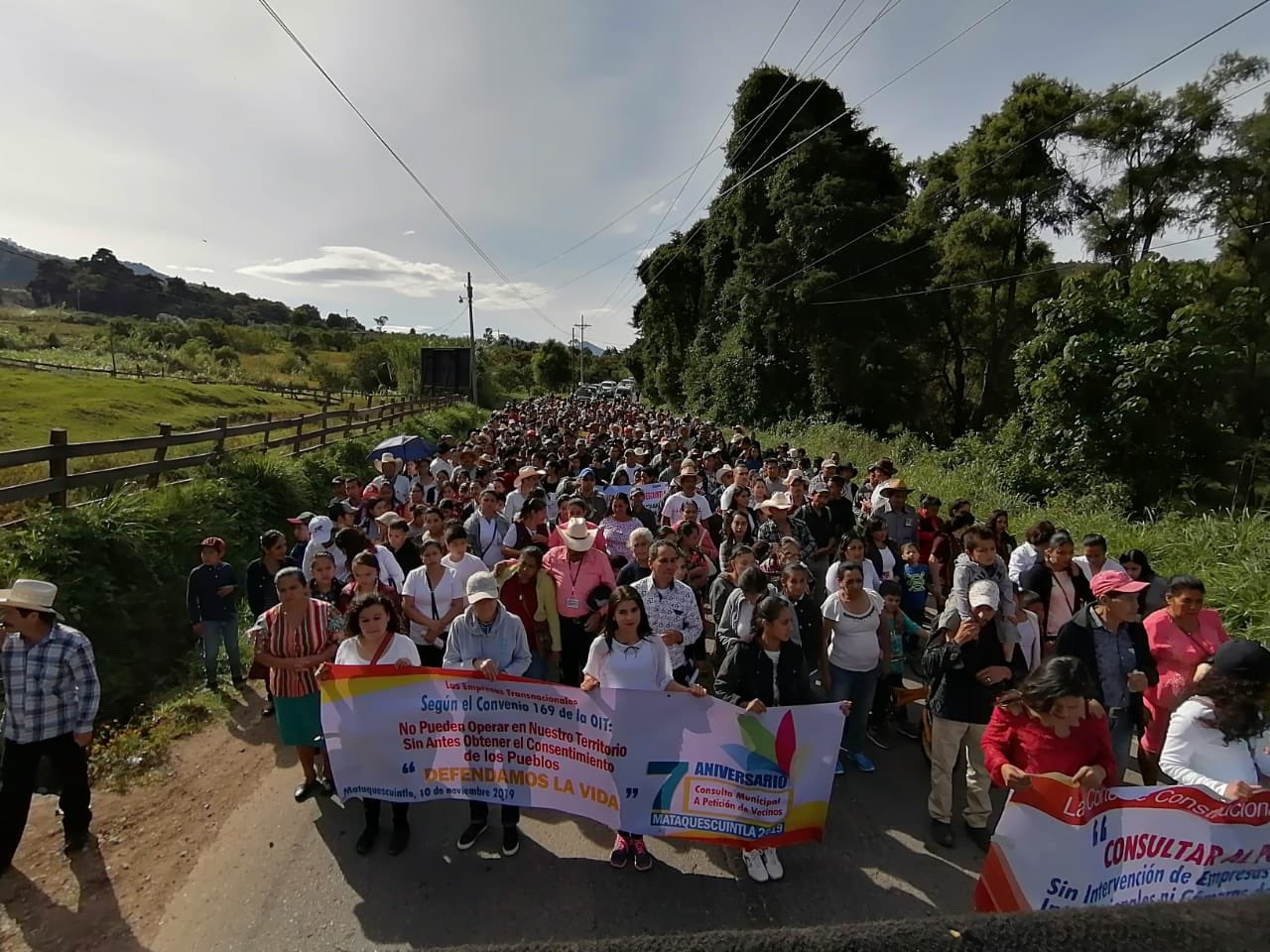 Guatemala’s Land Defenders Are Still Their Own Best Defense

The large-scale extraction of gold, silver, and other metals has large-scale impacts. Each industrial mega-mine leaves behind millions of tons of toxic waste, often polluting water supplies in perpetuity. Huge and permanent scars on the land, such as deep tunnels or pits, also remain.

Just as devastating are less visible harms on the social fabric and well-being of rural and Indigenous people, which often start even before a company gets a drill in the ground. That’s why throughout Latin America, the violent imposition of large-scale mining projects has sparked mass movements of people willing to stand up and fight back to protect what they value most: water, land, health, and diverse ways of life.

This has certainly been the case in Guatemala, where neoliberal reforms to the mining law opened the door to foreign investment shortly after the 1996 Peace Accords ended a 36-year internal armed conflict.

The development of the World Bank-supported Marlin mine in the northwestern highlands, the first industrial mine to advance after the Peace Accords, quickly led to repression and violence against the Maya Indigenous communities who opposed its construction in the early 2000s. Health and environmental impacts from the gold and silver mine soon followed.

People’s movements across the country learned from this experience.

Within a few years, Indigenous and farming communities throughout Guatemala held plebiscites, took to the streets, and petitioned the courts to oppose other mining projects. In recent years, as a result of community direct action and successful legal challenges over the lack of prior consultation with Indigenous people, the courts have ordered the suspension of the country’s three industrial metal mines and mandated the government to carry out consultations with affected communities.

These were unprecedented decisions. However, as our new report for Earthworks explains, powerful interests are striking back, and the headway gained in the country’s top court is at risk — along with much else — as Guatemala’s entire judicial system is under attack.

The peaceful resistance to Pan American Silver’s Escobal silver mine in southeastern Guatemala is an important example of the powerful organizing across the country against mining since the mining law reforms of the mid 1990s.

Despite the broad-based opposition of farming communities and Indigenous Xinka people, former owner Tahoe Resources forced the Escobal mine into operation in January 2014. The company enjoyed strong government support, using violence against peaceful protests, a state of siege, military-style surveillance, and legal persecution.

It took until mid-2017, but operations at the Escobal mine were eventually stopped — first through direct action in the form of two 24-hour, ongoing encampments to block traffic to the mine. A month later, the Supreme Court ordered the mine suspended pending consultation of the Xinka people by the Ministry of Energy and Mines. This decision was upheld by Guatemala’s Constitutional Court on September 3, 2018.

Hemorrhaging financially over the suspension of its flagship mine, Tahoe Resources was bought out by the Vancouver-based Pan American Silver in early 2019 while the consultation process plodded on.

Until very recently, the consultation process with the Xinka people had hardly advanced. The process was marred by irregularities, notably including the Ministry of Energy and Mines excluding the Xinka from their own consultation. Finally, in October 2020, after more than two years of Xinka-led pressure on the government and the company, Guatemalan authorities agreed to accredit the Xinka representatives elected by affected communities to participate in the consultation.

In the meantime, the Constitutional Court upheld the suspension of two other mines pending two more state-led consultations.

In late June 2020, the court ordered the Ministry of Energy and Mines to consult with Indigenous people affected by the El Tambor gold project owned by Nevada-based Kappes, Cassiday & Associates (KCA), just north of Guatemala City. This decision ratified a 2016 Supreme Court decision that halted the project for lack of prior consultation. Similar to the Escobal mine resistance movement, communities organized as the Peaceful Resistance La Puya have defended their water and health from mining for nearly a decade, maintaining a 24-hour encampment outside the mine entrance which continues today.

The same month, the court upheld a similar Supreme Court decision in the case of the Fénix nickel mine owned by the Swiss Solway Group in eastern Guatemala. A focal point of violence since its beginnings in the 1960s, today there are three related civil lawsuits proceeding in Canada against former owner Hudbay Minerals for violence between 2007 and 2009. The Constitutional Court ordered the mine to be closed during a consultation with the affected Maya population, although the company has so far refused to respect the suspension order, indicative of power struggles over who the law should serve.

Despite the Solway Group’s intransigence, these three decisions are unprecedented in a country in which big business and their political allies almost always have the upper hand.

The Pact of the Corrupt 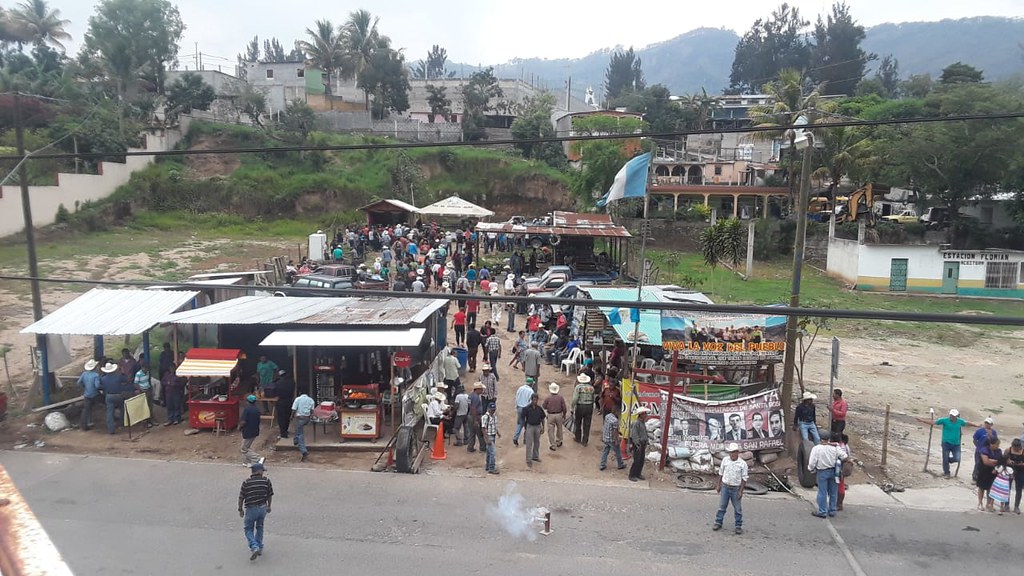 For over a decade, efforts to root out systemic corruption in Guatemala and strengthen key institutions in the country’s justice system were led by the UN-backed International Commission against Impunity (CICIG, by its initials in Spanish).

These efforts had important results. In particular, in 2015, a series of dramatic and groundbreaking anti-corruption cases toppled the right-wing government of Otto Pérez Molina. Yet with much of the Pérez Molina administration in jail or on the run from the law, Pérez’s successor Jimmy Morales — himself under investigation for corruption — expelled CICIG from the country in January 2019.

This backslide accelerated in 2020 under the current administration of President Alejandro Giammattei. A powerful group known in the Guatemalan press and to critics as the “Pact of the Corrupt” (Pacto de Corruptos), made up of powerful business people as well as members of congress and public officials, has been pushing schemes to undermine the impartiality of Guatemala’s Supreme Court of Justice, Appeals Court, and Constitutional Court.

The Pact of the Corrupt has already co-opted the Supreme Court and is accused of peddling influence to determine the future composition of the country’s highest judicial body, the Constitutional Court. The Pact of the Corrupt is also accused of encouraging disrespect for the high court’s rulings and attempting to unseat specific members of the court.

The depths of the corruption are most evident in the recent processes to fill two vacancies on the Constitutional Court.

In November 2020, the Supreme Court, acting in the interests of the Pact of the Corrupt, successfully nominated Roberto Molina Barrento to fill one of these vacancies. Barrento not only should have been disqualified for being affiliated with a political party but also for his record as a judge. As a previous high court member, he voted for an illegal resolution to overturn the 2014 conviction of former general Efrain Rios Montt for genocide and crimes against humanity.

Then, in January 2021, a lower-court judge with close ties to the Pact of the Corrupt, Mynor Moto Morataya, was selected to fill the other vacancy, but has yet to assume the position because he faces an arrest warrant for conspiracy and obstruction of justice. Moto is believed to have used his position to protect members of the Pact of the Corrupt who are accused of illegally interfering in the selection of judges to the Supreme Court of Justice and the Court of Appeals.

While the fight for control over the courts is far from over, the Pact of the Corrupt has entrenched its interests across various institutions with serious implications for judicial independence in Guatemala writ large. It also bodes poorly for the court-ordered consultations over mega-projects with Indigenous peoples, for which the Supreme Court is the designated arbiter.

Their Own Best Defense

For Indigenous and campesino peoples fighting to defend their territory from mining, these sustained attacks on Guatemala’s judiciary could leave them without any independent backstop in the court-ordered consultation processes, through which they’re fighting hard to have their self-determination respected.

The situation also augurs poorly in terms of the potential for greater authoritarianism and state repression. For these reasons, they have joined others in legal actions that aim to push back on corruption in naming of new court appointments, while they also continue to organize at the local level and with their allies.

The Xinka people, however, like other Indigenous peoples in the country, have never stopped defending their land and self-determination since the arrival of transnational mining companies to their territory — and long before. If the consultation is compromised by corrupt courts, biased public officials, or company interference, the process will fail. But, as the Xinka and others have long demonstrated, they will continue asserting their rights.

In the end, land defenders must be their own best defense.

Ellen Moore and Jen Moore are coauthors, with María Reyes, of the EarthWorks report Consultation at Risk: Advances in the Escobal Mine Consultation Overshadowed by Constitutional Crisis.