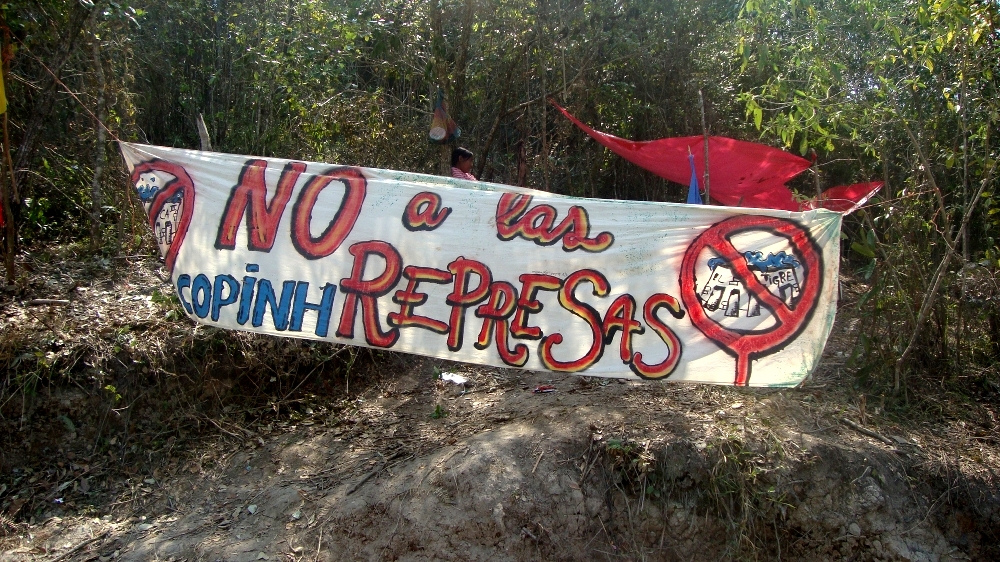 Gustavo Castro Witnessed the Murder of Berta Cáceres. That Means His Life Is in Danger.

In the face of silence from Washington, the Clinton-backed coup government in Honduras is mopping up activists for democracy and indigenous rights.
By Beverly Bell | March 22, 2016

The sole eyewitness to Honduran social movement leader Berta Cáceres’ assassination on March 3, 2016 has gone from being wounded victim to, effectively, political prisoner.

Now Gustavo Castro Soto may also be framed as the murderer of his long-time friend.

Mexico’s ambassador to Honduras, Dolores Jiménez, and Castro himself are worried that the Mexican national will be charged by the government for the killing, they told the National Commission of Human Rights of Honduras on March 16.

A writer and organizer for environmental and economic justice, Castro has been forbidden by local authorities from leaving the country to return to his native Mexico until April 6, at least. Since being released from several days in Honduran government custody, he has been forced to take refuge in the Mexican embassy in Tegucigalpa. The protection of the Mexican Embassy “does not mean that my life is no longer in danger,” Castro wrote to some friends and colleagues on March 4. As long as he is on Honduran soil, he remains in peril. Ambassador Jiménez called the risk he is running “an objective fact.”

Castro — who, as the lone witness to the murder, is able to identify Cáceres’ killer — is an impediment to the plan that the Honduran government is clearly advancing, which is to pin the murder on members of the group which Cáceres founded and ran: the Civic Council of Popular and Indigenous Organizations, or COPINH. So the fraudulently elected Honduran regime may dispense with Castro by charging and arresting him.

The government may also charge COPINH members with the killing of their leader, in the hopes of eliminating them from the body politic. Authorities tried to incriminate three of them just after the murder.

Prominent COPINH organizer Aureliano Molina was imprisoned for two days on suspicion of a “crime of passion,” though he was two hours away from La Esperanza, the location of the killing, on the night of March 3. Two other COPINH leaders, Tomas Gómez and Sotero Echeverria, were interrogated for days, during which time the government denied their request for accompaniment by their lawyers. On March 15, Echeverria was threatened with arrest.

Cáceres was a tireless organizer for accountable government, participatory democracy, indigenous peoples and their territories, human rights, and women’s and LGBTQ rights. For many years, she was subject to threats, attempted violent attacks, legal prosecution for being a “continual danger to the nation,” and other persecution.

During the three-month period prior to Cáceres’ murder, human rights accompaniers tracked 11 threats and attempted assaults by national and local government officials, police, soldiers, employees of the Agua Zarca dam project (which Cáceres and others were fighting), and unidentified men. And within 10 days of Cáceres’ death, Agua Zarca released incendiary public email announcements blasting the alleged “falsehoods of Berta Cáceres” and COPINH.

Those who have witnessed the price Cáceres has paid for her decades of advocacy have no doubt who is culpable in her murder. Her four grown children and mother stated publicly on March 5, “We hold DESA” — the company behind the dam — and “the international financial organizations backing the project responsible” for the “constant death threats against Berta, us, and COPINH. We hold the Honduran state responsible for obstructing Berta’s protection and for contributing to her persecution, criminalization, and murder.”

Many elements of the government’s so-called collection of evidence from Castro have been irregular at best, and illegal at worst.

Beyond being inconvenient for knowing too much, the eyewitness falls into the repressive government’s category of public enemy. Like Cáceres, Castro has been a vocal opponent of dam construction on indigenous rivers, as well as of the broad powers given to transnational corporations and the local elite to undermine democracy and plunder the riches of nature.

Castro is coordinator of the group Otros Mundos/Friends of the Earth Mexico. He cofounded — and sits on the governing bodies of — many anti-mining and anti-damming networks, as well as the U.S.-based organization Other Worlds. In his interrogation, the public prosecutor asked Castro about his environmental organizing and history of activism.

Following the killing in Cáceres’ home in the town of La Esperanza, Castro was detained for days in the local public prosecutor’s office for interrogation. On March 5, having been told the questioning was complete, he was transported by the Mexican ambassador and consul to the airport in Tegucigalpa so that he could return to his homeland. As he approached the migration checkpoint, Castro was set upon by multiple Honduran police, who attempted to grab him. The Mexican ambassador stopped them.

The government has since forbidden Castro from leaving Honduras for 30 days, or until April 6. When Castro appealed the order, the judge in the case ruled against it, even while admitting that there is no legal provision for a 30-day restraint for witnesses or victims.

The judge also suspended the license of Castro’s lawyer, Ivania Galeano, for 15 days. The stated reason was that Galeano had requested a copy of Castro’s file — which, according to Honduran law, was her right.

Even in the Mexican embassy, almost three weeks after the killing, Castro continues to be interrogated by the Honduran prosecutor.

Hearing No Protest from the U.S., Honduran Government Ramps Up Repression

The U.S. State Department put out a brief, generic statement of condolence the day after Cáceres was assassinated. At the same time, according to email communications, the State Department confirmed that it is cooperating with the Honduran government in the investigation, with various U.S. agencies actively participating in it.

On March 17, 62 U.S. congressional representatives sent a letter to Secretary of State John Kerry calling for an independent investigation of the assassination and urging the secretary to immediately stop U.S. security funding pending a review. Representative Hank Johnson, co-sponsor of the letter along with Representative Keith Ellison, said, “It’s time for our government to leverage security assistance and multilateral loans so as to put real and lasting pressure on the Honduran government to protect its activists and pursue those responsible for these hideous crimes.”

Meanwhile, the silence from the administration has given the Honduran government a green light for repression.

That repression was aggressively escalated on March 15. On that single day, Honduran soldiers and police coordinated assaults against 10 activists from four geographic regions and three separate organizations. Nelson García, a COPINH leader, was assassinated during a violent government eviction of the community of Rio Chiquito. In the capital, three hit men shot and wounded Christian Mauricio Alegría, who works with the global peasant movement La Via Campesina. His uncle, Rafael Alegría, is a deputy in the national parliament from the opposition Libre Party, and is former secretary general of La Via Campesina. José Flores, head of the United Movement of the Peasants of the Aguan (MUCA), was temporarily arrested along with family members in the town of Tocoa.

The message was clear to all. No matter where one is or with whom one works, activists are not safe in Honduras.

From the Mexican embassy on March 15, Castro sent out a note of condolence and support to the Honduran people. He closed the missive this way: “Soon there will be justice.”

Beverly Bell is an Associate Fellow at the Institute for Policy Studies and Coordinator of Other Worlds. She invites you take action here to call for safety for Gustavo Castro and members of COPINH, as well as for a fair, internationally led investigation into Berta Cáceres’ killing.