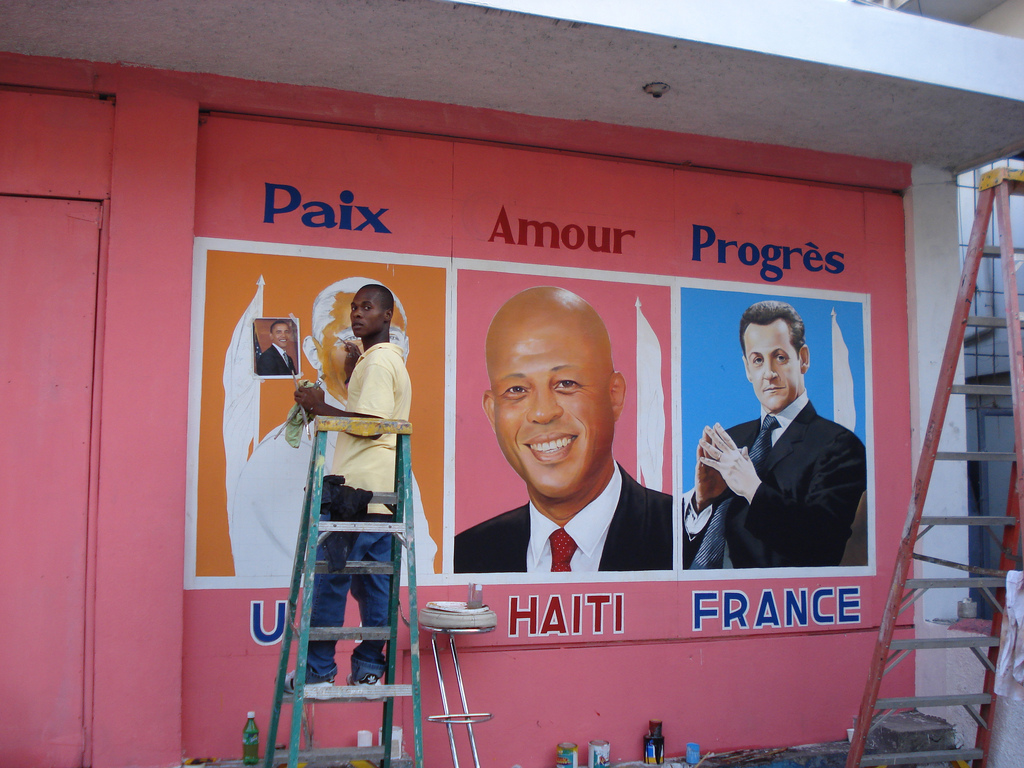 As Haiti faces yet another political crisis, it’s time to recognize the role the international community has played in creating it.
By Nathalie Baptiste | June 11, 2014

In late April, thousands took to the streets in Haiti’s capital city demanding the resignation of President Michel Martelly, who had come to office in 2011 through fiercely disputed elections.

They also called for the departure of the United Nations Mission to Stabilize Haiti (MINUSTAH), a decade-old peacekeeping force that stations 9,000 foreign troops in the country. Tensions have long accompanied the UN’s role in Haiti, but criticism reached a crescendo after evidence emerged that MINUSTAH had actually caused Haiti’s deadly 2010 cholera outbreak.

International entities—from the UN to the U.S. government to the Organization of American States (OAS)—have long intervened in Haitian politics. Their stated purpose is to benefit Haiti, whether as peacekeepers, guarantors of free and fair elections, or providers of aid. However, they seldom acknowledge the negative consequences of their own efforts—including violence against civilians, sham elections, and health hazards that kill thousands.

Now, as Haiti faces yet another political crisis, it’s time to recognize the role the international community has played in creating it.

Elections: Neither Free Nor Fair

Washington has wielded a heavy hand in Haiti since at least 1915, when the United States occupied the country after a mob brutally murdered President Vilbrun Guillaume Sam. U.S. marines remained in the country for nearly 20 years afterward.

Nearly a century later in 2004, the United States aided a paramilitary group in overthrowing the democratically elected president Jean-Bertrand Aristide, subsequently exiling him to South Africa and banning his political party, Fanmi Lavalas, from participating in elections.

Fast forward to Haiti’s November 2010 presidential election, which came less than a year after a 7.0-magnitude earthquake leveled buildings, killed hundreds of thousands of people, and displaced millions, and just weeks after the beginning of a devastating cholera outbreak. Martelly eventually emerged victorious from the disputed poll, but the vote suffered from a grievous lack of legitimacy.

Even before Election Day, many Haitians planned not to vote. After all, Fanmi Lavalas, the most popular political party in the country, had been banned—a move tantamount to forbidding Democrats or Republicans from participating in U.S. elections. On Election Day itself, many eyewitnesses reported ballot box stuffing, ballots being torn up, voter intimidation, and fraud. In the end, fewer than 23 percent of registered voters cast a ballot in the elections.

Haiti’s Provisional Electoral Council (CEP), the government body responsible for overseeing the elections, declared former First Lady Mirlande Manigat the leader, with the government’s candidate Jude Célestin coming in second and Michel Martelly in third. But although Manigat had secured a plurality, she didn’t have the margin of votes required to avoid a runoff. The CEP’s announcement of these results sparked riots and protests, mostly by Martelly supporters. To quell the resistance, the internationally community intervened once again.

The Organization of American States (OAS) dispatched a mission of experts to determine who would compete against Manigat in the runoff elections. Through a highly flawed process, OAS chose Martelly over the candidate with the second-most votes, Célestin. The so-called experts got this result by evaluating only 8 percent of the tally sheets, with the majority of the discarded results coming from pro-Célestin areas. More troubling still, the “experts” did not use any statistical method to examine what the outcome would have been had they counted the other 92 percent of the tally sheets.

The runoff election finally took place on March 20, 2011. Voter turnout was so abysmally low that Martelly won the presidency with the votes of only 17 percent of the electorate. Essentially, the OAS mission, backed by the international community, installed Martelly as president with utter disregard for democracy and sovereignty in Haiti.

Three years into his presidency, Martelly now faces a political crisis. Parliamentary elections are two years overdue, and the U.S.-backed Martelly government is at a stalemate with the Haitian Senate over the composition of Haiti’s electoral body. Earlier negotiations brokered by the Catholic Church—known as the El Rancho Accord after the hotel the talks took place in—had called for elections to be held in October 2014. However, many Haitians, including the Lavalas party and Senate president Simon Dieuseul Desras, have denounced the El Rancho talks, calling them a “sham” because they involved only Martelly allies.

Meanwhile, Michel Martelly and his prime minister, Laurent Lamothe, appear to be in lockstep with the United States and the rest of the international community. Lamothe recently praised the president for his policies, alleged that it’s the opposition that wants to obstruct progress, and affirmed his belief that the El Rancho Accord should be upheld.

The United States agrees with him. In March, Washington sent three members of Congress to Haiti to urge the Haitian Senate to accept the El Rancho Accord.

Thumbs on the Scale

But instead of taking some of the blame, the international community has decided to threaten the Haitian government. In April, the United States announced that Haiti stood to lose $301 million dollars in aid money if it failed to prove that officials are taking the necessary steps to hold fair and free elections. That money, allocated by the U.S. Congress, was slated to support Haiti’s coast guard, health ministries, and other projects.

Despite the strings that come with foreign aid, Haiti is in no position to start losing aid packages. A decrease in funding to any sector spells trouble, but the health sector is particularly vulnerable. With no end in sight for the deadly cholera outbreak and with the rainy season underway, healthcare providers, hospitals, and clinics will already be struggling to provide services. Revoking an aid package will probably not cause any damage to the government officials tasked with holding elections, but it will hurt the poorest, sickest, and most vulnerable populations of Haiti.

Ignoring its own role in this and previous crises, the international community has warned that Haiti is headed toward another political crisis with “unpredictable consequences.” This is no minor prospect, since political crises in Haiti have historically led to violence against citizens and military coup d’etats, causing thousands of Haitians to attempt to leave the country in shoddy, hastily built boats.

According to the United Nations, if elections aren’t held in 2014, this could lead to the dissolution of Parliament in January 2015, leaving Martelly to rule by decree—an alarming prospect for a country with a history of brutal dictators.

As if to underscore that point, on May 6 Martelly unilaterally decided to appoint Fritzo Canton as a member of the body that is to oversee elections. Canton is the lawyer of Jean-Claude Duvalier, the former dictator of Haiti currently being tried for crimes against humanity and embezzlement. This appointment will surely stir up yet more controversy from the opposition.

On May 13, John Kerry certified that Haiti is in fact taking the correct steps to ensure that free and fair elections take place. That may bode well for retaining aid packages, but it ignores the fact that the Haitian Senate and the president are still in a gridlock. If the dire warnings do come true and political chaos breaks out in Haiti, then it will be high time for the international community to step back and examine its own role in Haitian politics.