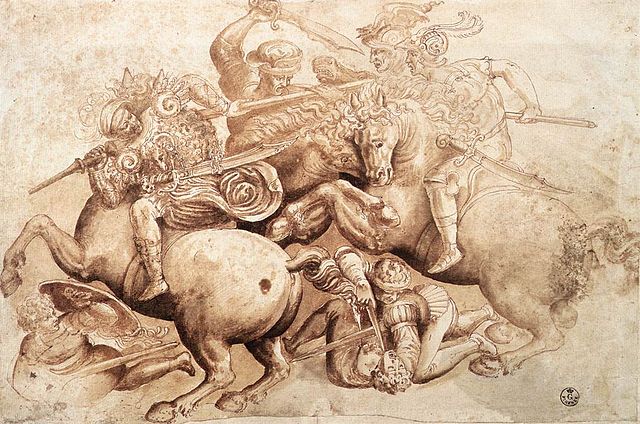 What Happens if Syria Strikes Back?

In dealing with the pretexts for war-making, not the real reasons, the Obama administration is underestimating the opposition.
By Ibrahim Kazerooni , Rob Prince | September 5, 2013

Copy of a detail of “The Battle of Anghiari,” Leonardo da Vinci’s lost depiction of the futility of war. Courtesy Wikimedia Commons.

A few days ago, writing about the Obama decision to postpone a military strike against Syria, we speculated:

At the least, it buys time to build opposition to such a reckless course. At the most, it is the beginning of a change in direction. Too early to tell. we would hope the latter but fear the former.

Didn’t take long for the smoke to clear on that one.

Having lost a key ally as Great Britain announced it would not participate in a military strike, Obama saw his foreign base of support shrink to nearly naught. He made a tactically clever move: to shore up his domestic support to compensate for the loss. From the tenure of the discussion in the Senate yesterday, which we forced ourselves to watch (for a while anyway), it was pretty clear that the U.S. Senate will stand behind Obama and formally support military action. Although there are stipulations, limitations to Obama’s field of action (no troops on the ground, a sixty-day window for military strikes with the possibility of a further Congressional approval), war has a way of escalating from one set of conditions to another and those limitations might turn out to be “flexible,” as they were in the case of Libya where a no-fly zone transformed almost immediately into an “air attack zone.”

We expect, like liberal elected officials elsewhere, the two Democratic senators from Colorado, Mark Udall and Michael Bennet, both of whom like to fashion themselves as a notch left of center in good times, but who move to a notch or two right of center in hard times or when it affects them personally, to vote for the strike against their better judgement.  It is unlikely either Bennet or Udall would go against Obama on the Syria vote. Bennet has been close to Obama for some time. The latter considered Bennet for the Secretary of Education post. Bennet was appointed by then Governor Bill Ritter. At the time Bennet had broken ranks with many Colorado machine Democrats and supported Obama, who in turn supported Bennet in his bid for office. As for Udall, the largest contributors to his last campaign were political lobbyists/power brokers, Norm Brownstein and Steve Farber (it was recently pointed out to me). The “pretty boy” senator (he does strike a handsome pose) is not likely to wander outside of the political boundaries of his two most generous benefactors. Unless we are missing something, Obama can count on both of them to support his effort. In fact, there will be many Democrats who support Obama, in part because they are worried that if they abandon him as the British Parliament did, he will look like the fool he is shaping up to be and so, they’ll “stand by their man.”

More and more it appears that Obama will get his strongest support from the political center, i.e., “moderates” (funny term for people advocating war, no?) in both parties will come together in a bipartisan show of support. The domestic opposition to striking Syria is coming from the right (Tea Party types, libertarians around Ron Paul and the left – small and isolated as it is these days – and more general peace movement types). Can these elements joint forces to undermine the war effort? Can they show the degree of political maturity necessary to politically work together? We’ll see. Whatever, Obama will not go to war without a fight from at least a portion of the American people. As we suspect he knows that his base of support is thin outside of Congress, we would bet that the military strike will come sooner rather than later.

We’re not going to go on about all the reasons not to go to war in any detail other than to briefly mention the obvious and then raise a few questions that the U.S. Senate in its wisdom, or lack thereof, failed to address. The fundamental issue is simple: the Obama Administration has been dealing with the pretexts for war-making, not the real reasons. As with the case made for invading Iraq a decade ago, we are presented with either outright false flag operations, or exaggerations, a rush to judgement – rationales for going to war whose logic unwinds almost as quickly as the Administration tries to defend them. Not only is the argument that Assad used chemical weapons against his own people on August 21 collapsing, but an alternative narrative – that the chemical attack was done by Islamist rebels with the poisonous stuff provided by the Saudis – is gaining traction. Granted neither scenario has been yet convincingly proven (or disproved), yet another reason for Obama to hurry up with the air strikes!

What if the Syrians (and/or their allies – Hezbollah, Iran, Russia) don’t take a U.S. air strike lying down and return fire? This prospect has not been taken seriously by the Obama Administration to date.

There is an assumption that guides the Obama Administration’s thinking on launching an air attack – that we can assume (from Iraq, Afghanistan, Libya) that it will be nothing short of devastating: that the Syrians or their allies will not respond militarily, or more unsettling, that knowing they are about to be clobbered, that they will not decide to pre-empt the U.S. strike! Damascus will just try to absorb the blows as quietly as possible, the logic goes. From whence emerges the myth of Syrian military passivity? A couple of places – one of them is Saudi Arabia. The Saudis, a curious and frankly unreliable source, have lately been reassuring the Obama Administration that the Syrians will not strike back and that attacking Syria will be the same kind of turkey shoot as the NATO attack on Libya turned out to be.

That the Syrians will just roll over, take the blows and then beg for mercy is just one of the Obama Administration’s versions of politically sugar-coated cyanide. It plays well in a U.S. Senate itching to let the president lob his Cruise missiles. Those supporting an air strike also seemed to have happily swallowed the same pill.

One country that is taking Syrian/Iranian/Russian warnings far more serious than the United States is Israel. Israel is in a state of alert, and the country is readying itself for what could be a rough time. A number of times in the past, Israel underestimated the military will and skill of its Hezbollah adversaries in southern Lebanon. In its 2006 war with Hezbollah, it found that the Lebanese Shi’ite militias could give out as much as they could take. If Israel rained down its bombs and missiles on southern Lebanon, Hezbollah launched wave after wave of missiles on northern Israel causing several hundred thousand Israelis to flee south to safer havens. Even on the ground Israel suffered unusually high casualties with the Lebanese being able to knock so many Israeli tanks out of commission that Israel was forced to withdraw what remained of its tank and heavy armored vehicles out of Lebanon’s south. The Israelis were also taken aback when Hezbollah missiles hit two Israeli naval vessels, sinking one and damaging the others. As with the tanks, Israel wisely withdrew its ships from the battle zone.

It is not so much that Hezbollah “won” the military confrontation, but they didn’t lose either. And now they have – or claim to have – missile systems that can reach Tel Aviv. Having underestimated their military opponents once, the Israelis seem far more sober this time.

Then there is Syria itself, Iran and Russia. Several commentators here in the United States – including some Colorado personalities – have essentially minimized or essentially written off that  Syria, Iran or Russia will respond to a U.S.-led air strike. Rather cavalier approach! Some of it comes from the arrogance of power – nothing else:  the belief that, in this post-Cold War era the United States can do whatever it wants, whenever it wants and that its opponents will just shake in their boots and climb into a hole to hide the way Saddam Hussein did. Or it can utter bellicose rhetoric but not retaliate militarily the way as Gaddafi did. The Libyan example is especially seductive – and has been all along.

The argument that Syria is not Libya has been brushed aside by “pre-emptive Neo-conservative” and “humanitarian interventionist” alike, despite the fact that the Assad regime has, after two years, held its own and, in fact,  turned the military tide against its rebel opposition. This despite the huge (and that is the right word) amount of military hardware that the United States, the Saudis, and Qatar have poured into Syria in support of these rebels.

The Syrians have used Saddam/Gaddafi-like rhetoric but they have said they reserve the right to defend themselves and will respond militarily. Iran, granted vaguely, has said little but has said that the matter will be “settled in Damascus.” If Obama has “drawn a red line in the sand” so perhaps has Russia when it comes to defending Syria. Russia’s position on Syria has hardened. Having been betrayed on Iraq, Libya and with a long-term strategic relationship with Syria going back some sixty years, it is shaping up that Russian political will to defend Syria, or help Syria defend itself, is stiffening as well. As a friend suggested to us yesterday – Russian support for Syria is shaping up to something akin to U.S. support for Israel.  There is a Russian fleet in the eastern Mediterranean facing the U.S. fleet. Russia has publicly committed to replacing all the damage inflicted on Syria by a U.S. attack. How much of this is bluster? How much, as one of Rob’s daughters used to say, is “for reals”?

Finally, let’s take this scenario, which mainline media commentators on MSNBC unceremoniously wrote off, a step further. The U.S. hits Syria with Cruise missiles and Syria responds by targeting one of those big U.S. sitting ducks in the Eastern Mediterranean and does serious damage to one, or more of them. What then?

• What happens if, for the sake of argument, the Syrian regime does target U.S. warships (or other military installations)? Even the Israelis have admitted that Syria possesses over 100,000 missiles that can easily hit one of these ships. Will the U.S. respond militarily or withdraw?

• What happens if Israel uses the growing conflict to attack Syria (it’s already hit it twice with air strikes recently) and either Syria itself or Hezbollah responds. The Iraqi government – our supposed ally – has made it clear it opposes a U.S. strike.

• Are the 50,000 or so U.S. troops still in Iraq, probably permanently, possible targets either for Iraqi Shi’ite militants or others? That American troops will be targeted in Iraq is almost a certainty, especially in light of Shi’a scholars arguing that if Syria is attacked, U.S. interests would then be legitimate targets.

Is there a possibility of conflict spilling over into the Persian Gulf? How serious are the Russian threats made to attack Saudi Arabia?

We don’t know the answers. We are only convinced that the blindness that comes with the arrogance of power will backfire sooner or later and we would be very surprised if the Syrians and the allies took this attack – discussed and prepared to a great degree before the eyes of the world – lying down.  Those commentators who argued that we need not be concerned with a Syrian response are playing dangerous games with peoples’ heads.