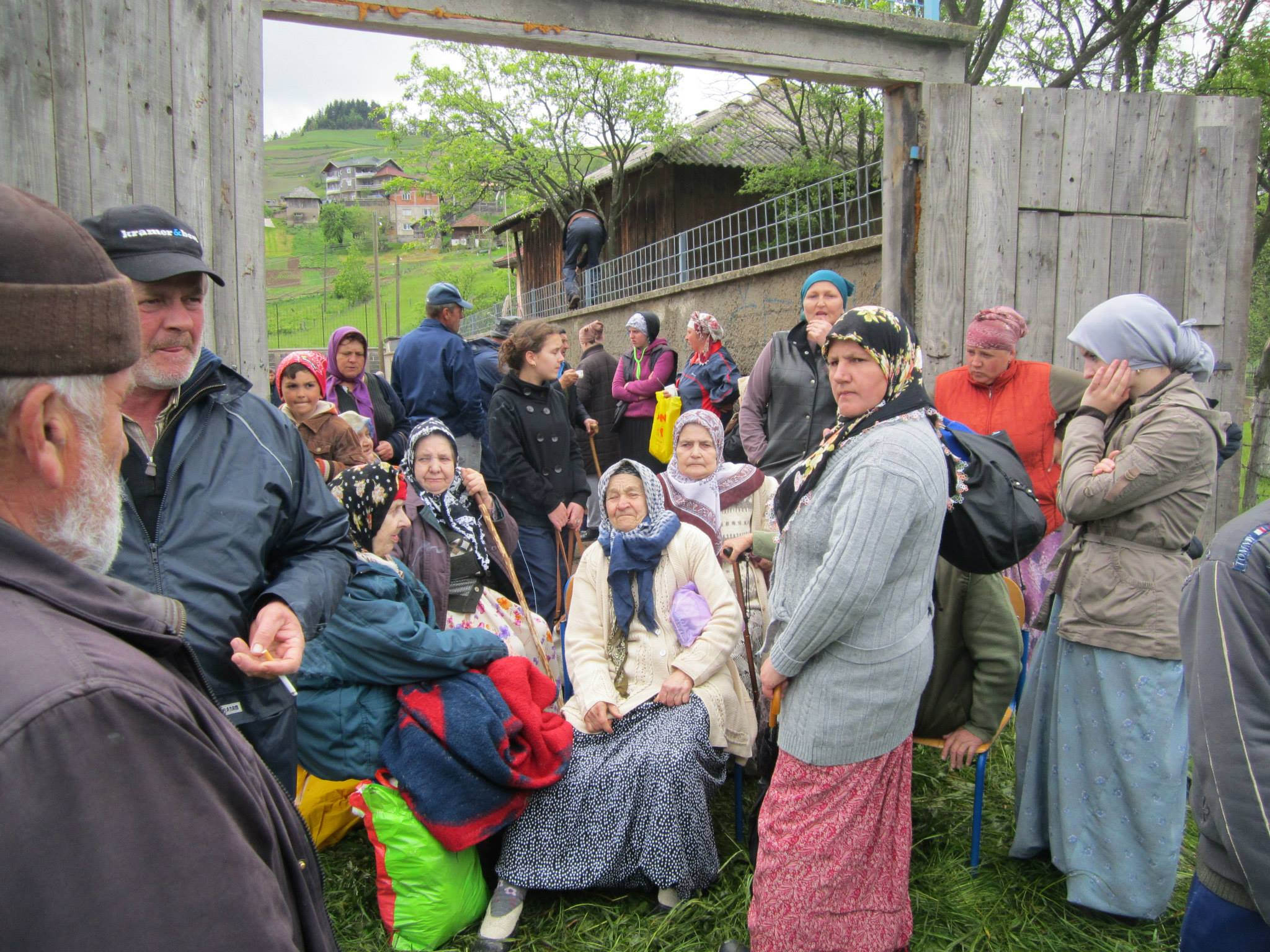 How Hard Times Are Healing Bosnia

Amid rising anti-government sentiment and a series of natural disasters, Bosnia-Herzegovina's fractured ethnic communities are drawing strength from an unlikely source: each other.
By Peter Lippman | September 17, 2014

Over the past year and a half, Bosnia-Herzegovina has experienced social upheaval that outstrips any other political turmoil since the end of the 1992-1995 war. Along with these events, recurrent flooding has taken place that is worse than any previous incident in the country’s 120 years of recorded weather history. The combination of these events, in a year of national elections, brings the dysfunctional condition of Bosnian society into high contrast.

In June 2013, thousands of protestors took to the streets in Bosnia’s capital city, Sarajevo, to protest an absurd legislative snarl that, for several months, prevented newborn babies from being registered and receiving identification numbers. This essentially rendered the newborns as “non-citizens,” without the rights to health care and passports that were, in some cases, urgently needed. At least one infant died as a result of the inability to travel to a neighboring country for treatment. Although the proximate cause of the demonstrations was the government’s apparent indifference to the rights of its youngest citizens, the unrest was meanwhile directed at the larger problems of pervasive corruption and the careerism of governmental officials.

Demonstrations spread to Mostar and several other cities in the Croat- and Muslim-controlled Federation, and there was some show of support from activists in the Serb-controlled Republika Srpska. The protests were larger than any others since the war—Bosnia’s parliament building was surrounded and blocked for a couple of days.

After several weeks the protests subsided and people went back home. But the action resonated throughout the country, where historically it has been difficult for people of different ethnicities to cooperate with each other, not only because of geographical separation in the ethnically divided post-war state, but also because of political divisions and the memory of the four-year-long war.

Then, in February of this year, far greater protests took place that more directly addressed the economic ills of a society with a clumsy government that boasts more ministers than the far more populous Japan, where those in power earn more than the average European politician, and where unemployment is pushing 40 percent. The demonstrations, growing out of protests by workers laid off from privatized companies in the Tuzla area, spread to every city in the Federation and gained support in the Republika Srpska as well.

One of the results of the February-March uprising, in which governmental buildings and party offices were torched in several cities, was the formation of grassroots citizen assemblies known as “plenums.” These informal bodies, intensively active for a couple of months, communicated among each other throughout the country and developed a set of demands confronting the politicians‘ corruption and cronyism.

Although grassroots activism is cyclical in Bosnia, in each new phase it grows, spreads, and becomes more sophisticated. International commentators habitually ignore such activism as an element in the possible resolution of Bosnia’s systemic ills. But that is a mistake—and the events of spring 2014 have shown that ordinary Bosnians are, albeit episodically, a force that cannot be ignored.

Quickly following the spring rebellion, epic flooding struck Bosnia in May. Starting in the middle of the month, in a matter of three days the skies dumped three months’ worth of rain.

The results were cataclysmic. Nearly 100,000 residents of the northern and eastern parts of the country, from Prijedor to Bijeljina and down to Zvornik, were temporarily displaced. Thousands of houses were completely destroyed, and bridges were dislodged—as were landmines left over from the war. Farm plantings were sloughed away along with the top layer of land as, hard on the heels of the flood, several thousand landslides wreaked further damage in the mountainous sections of the country.

The human and economic toll was staggering. While the death toll did not exceed several dozen, thousands of people were displaced on a long-term basis—many of them for the second time since the 1990s. Thousands of livestock were killed in the flash floods and landslides, creating an urgent public health hazard. Schools were rendered useless, and some local administrative offices and libraries were washed away.

One local resident reported, “The material damage caused by the floods is far worse than after the war”—even though the war itself had resulted in half a million destroyed housing units.

The destruction caused by natural disaster was quite possibly greater than that caused by armies in some parts of the country, and it is probable that recovery from the economic setback affecting all of Bosnia-Herzegovina will take many years. Mines were flooded and rendered useless, and many factories severely damaged as well, putting hundreds out of work.

The Uses of Adversity

On the positive side, ordinary people mobilized in many parts of the country and volunteered to help with emergency assistance. Students and activists from Sarajevo donned boots and work gloves, and bussed to afflicted areas to help dig out. A recreational rafting outfit from Bihać took its equipment to Doboj to help pluck stranded flood victims off roofs and balconies.

Ethnic boundaries often melted away. Some of the worst flooding took place in the Republika Srpska, and Muslim volunteers paid no attention to the inter-entity borderline as they traveled to help out whoever needed help. Solidarity thus developed quickly among the flood victims and volunteers from various parts of the country, with Serbs, Croats, and Muslims often working together.

On the personal and community level, assistance was forthcoming immediately. Here and there, the plenums that had been formed a few months before played a significant role in coordinating assistance. Likewise, emigrant communities abroad raised funds and sent hundreds of truckloads of aid into Bosnia.

One volunteer reported, “Today I was in Prijedor. People, the closer you are to misfortune, you encounter better and better people; they speak with you as if they have known you for years. Before you say anything, they ask how things are with you, are you alright. People in trouble have that wonderful characteristic…to smile sincerely. These people have lost everything that they have, and still they have a smile that heals. In Prijedor everyone is helping each other, regardless of what their name is. While we were loading food in Doboj, two vans arrived from Sarajevo; in Šamac I saw an aid truck from Gradačac.”

Doboj and Sarajevo—as well as Šamac and Gradačac—are towns that lie on opposite sides of the inter-entity borders, but people were eager to help those in need regardless. In response to the assistance, there were public expressions of thanks to those of another ethnicity, without whom, as one flood victim expressed, “we would have died of thirst and hunger.” News articles bore headlines such as “Catastrophic floods bring down Bosnia ethnic barriers” and “Faith Restored in Humanity in the Mud of Doboj.”

In the official realm, help was not as efficient, leaving politicians the target of widespread criticism. The state and entity governments were slow to react to the disaster. When they did, officials competed for publicity—with politicians vying to be seen as “on the spot” and concerned. Too often, they were only concerned about their own ethnic constituency. Indeed, in the Republika Srpska, local officials tended only to help Serb communities, leaving communities of returned Muslims to fend for themselves or depend on help from the Federation.

Sadly, floods struck again in August for a brief period. With the rainy season around the corner, it is certain that there will be more calamity. Public officials have thus had renewed opportunities to show their concern and efficiency, but the government remains sluggish in allocating the millions of euros it has received in international donations.

Flooding has altered the course of rivers in some places, but emergency management agencies have not gotten around to repairing levees and taking other measures to prevent future damage. Hundreds of schools, which should have opened at the beginning of September, remain closed, and there are still hundreds of displaced people in collective centers without early prospects for return.

Public trust in government has for years hovered around the bottom of the scale, but it is even lower now, as ordinary people voice suspicions about embezzlement of donations. In some areas, villagers whose roads have been cut off by landslides have blocked nearby highways, demanding assistance.

All this is taking place in a period leading up to the four-year national elections that will be held in mid-October. With over 7,000 candidates and two dozen parties vying for seats in parliaments at several levels and for the three-part presidency, the contestants are alternately promising to help the flood victims and accusing their incumbent rivals of failure to help. Those incumbents have shown that they are more interested in expending resources to ensure their electoral victory than to improve public safety.

But prospective voters have less faith than ever that elections can lead to relief, as new faces in the electoral lists are all but non-existent. Political contests and natural disasters both seem to be events that ordinary people have to suffer through.

Elections come and go, and so do floods, and the survivors are left on their own to cope as well as they can. It is to be hoped that in the course of increasing protests, citizens of all ethnicities will continue to unite and build pressure for real change.

Foreign Policy In Focus contributor Peter Lippman is a life-long human rights activist. Fluent in the local language, he has spent many years visiting and living in the former Yugoslavia. More of his writings can be found here.