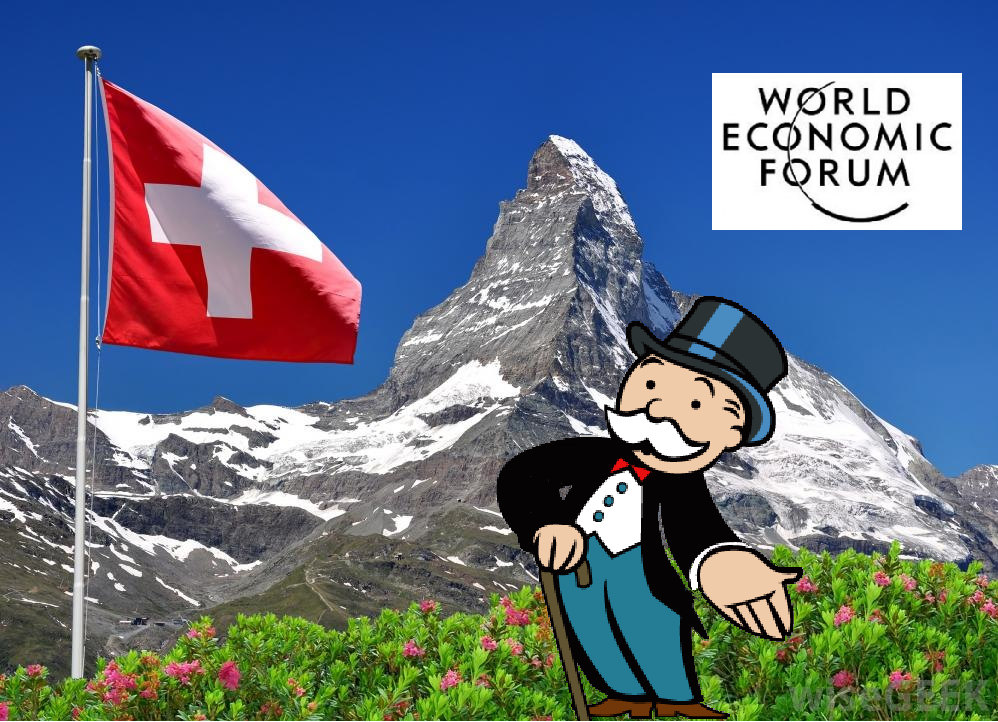 Instead of just talking about inequality, the global business elites gathering in Switzerland can do something about it: Stop dodging their taxes.
By Sam Pizzigati | January 19, 2016

Every winter the world’s political and business elite retreat to the Swiss mountain resort of Davos to think deep thoughts and sup at five-star eateries. The corporate execs, bankers, and finance ministers who frequent this annual Davos World Economic Forum have of late devoted considerable time to the topic of inequality. Last year’s forum, for instance, identified income inequality as 2015’s “most significant trend.”

But talk can be cheap. In fact, the more the elites at Davos seem to contemplate our global great divide, the more global wealth seems to concentrate in fewer pockets.

Back in 2010, as the global charity Oxfam reminds us in a new report released on the eve of Davos 2016, the world’s 388 richest billionaires had a combined fortune that equaled the net worth of the poorest half of the world’s population.

But last year just 62 top billionaires had enough net worth to match the wealth of humanity’s poorest half. That bottom half totals some 3.6 billion people.

Since 2010, those 3.6 billion folks have together lost just over $1 trillion — 41 percent — of their household wealth. The richest 62 of our global billionaire class, meanwhile, have gained $542 billion over that same time span, a 44 percent increase in their personal net worth.

These fortunate 62 — a group small enough to fit in a bus — certainly do have some good-times company. Our world’s wealthiest 1 percenters now average $1.7 million each in wealth, a total over 300 times greater than the average net worth of our world’s bottom 90 percent.

The ultimate global inequality bottom line? Our top 1 percent, notes Oxfam, “now have more wealth than the rest of the world combined.”

The crowd that’s assembling this January in Davos could, with a snap of a few fingers, end this staggeringly stark inequality in a relative matter of minutes. Wealth, after all, isn’t concentrating at such a ferocious rate because the rich are “innovating” at some spectacular level. Wealth is concentrating so ferociously in good part because the rich have become incredibly adept at concealing — from tax collectors — a huge chunk of their fortunes.

Oxfam’s researchers put the amount of wealth that the global rich now have stashed away in offshore tax havens at $7.6 trillion. And those doing the hiding include the hefty share of the movers and shakers at the Davos World Economic Forum.

Oxfam has analyzed the tax machinations of 200 of the world’s top corporations, a group that encompasses a fair number of the corporate “strategic partners” at Davos. Nine of ten of these corporate giants turn out to “have a presence in at least one tax haven.”

Those corporate CEOs sashaying around Davos, in other words, could with some simple executive orders put a huge dent on a “global system of tax avoidance” that, says Oxfam, “denies poor countries the resources they need to tackle poverty, put children in school, and prevent their citizens dying from easily curable diseases.”

Sam Pizzigati edits Too Much, the Institute for Policy Studies online monthly on excess and inequality. His latest book: The Rich Don’t Always Win: The Forgotten Triumph over Plutocracy that Created the American Middle Class, 1900-1970 (Seven Stories Press).