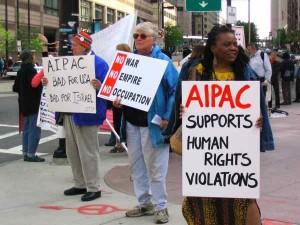 It's time to seize upon AIPAC's strategic blunder of singling Israel out for special treatment in Washington and push for an end to U.S. military aid to Israel.
By Ramah Kudaimi | March 28, 2013

It has been roughly a month since the first $85 billion of Congress’ across-the-board “sequestration” cuts started to impact the daily lives of Americans. Parents are dealing with Head Start programs shutting down; patients are worrying about their treatment being interrupted by cuts to Medicare; and families living in poverty are enduring cuts to already depleted social services such as emergency food and shelter programs.

In the midst of all this, thousands of lobbyists descended on Capitol Hill in early March to voice their concerns over cuts to another program. These lobbyists were not asking Congress to restore funding to schools, hospitals, or shelters. Instead, they were demanding that Congress fully fund military aid to Israel, aid which helps Israel continue its occupation and apartheid policies toward Palestinians.

Yes, with nearly 22 percent of children in the United States living in poverty, the American Israel Public Affairs Committee (AIPAC) sent volunteer lobbyists to ensure that Israel doesn’t lose an estimated $250 million in U.S. military aid. Not only did these lobbyists argue that military aid to Israel should be exempt from mandatory cuts, they also pushed to upgrade Israel to a “major strategic partner” of the United States to insulate the country from any future cuts. They also advocated a resolution to provide Israel unlimited support should it launch a war against Iran—a particularly despicable request so near to the 10-year anniversary of the U.S. invasion of Iraq. Israel is already scheduled to receive $30 billion in U.S. military assistance through 2018.

For years now, AIPAC has used its annual policy conference and lobbying efforts to promote war, occupation, and apartheid. From the U.S. invasion of Iraq to the current push for a military confrontation with Iran—not to mention Washington’s decision to side with the right-wing Israeli government even as the UN General Assembly voted overwhelmingly in favor of Palestinian statehood—AIPAC’s grip on U.S. policy toward the Middle East has impeded any chance for peace and justice in the region.

But AIPAC may have gone too far this time. Members of Congress—who usually sign on to any resolution AIPAC pushes for—don’t seem too keen about designating Israel a major strategic partner. Only 155 House members and 16 senators have signed these AIPAC-backed resolutions.

Still, if President Obama’s speeches in Israel and the West Bank are any indication, no major policy changes are coming anytime soon. The president talked a lot about the need for peace without outlining any specific actions the United States would take against Israel for continuing to violate international law by killing Palestinian civilians, expanding West Bank settlements, and denying Palestinian refugees their rights.

But Obama was right about one thing. “Speaking as a politician,” he told Israeli students in Jerusalem, “I can promise you this: political leaders will not take risks if the people do not demand that they do. You must create the change that you want to see.”

For at least 10 years now, the global boycott, divestment, and sanctions movement (BDS) for Palestinian human rights has been based on this premise: when governments fail to act, it is up to the people to rise up and stand for justice and dignity. From local campaigns against Veolia to national interfaith boycott efforts targeting SodaStream, the BDS movement in the United States is growing, and it is only a matter of time before the U.S. government is forced to take action for Palestinian human rights. Thus is important to seize upon AIPAC’s strategic blunder of singling Israel out for special treatment in Washington and push for an end to U.S. military aid to Israel.

Ramah KudaimiRamah Kudaimi is Membership and Outreach Coordinator at the U.S. Campaign to End the Israeli Occupation. You can follow her on Twitter @ramahkudaimi.