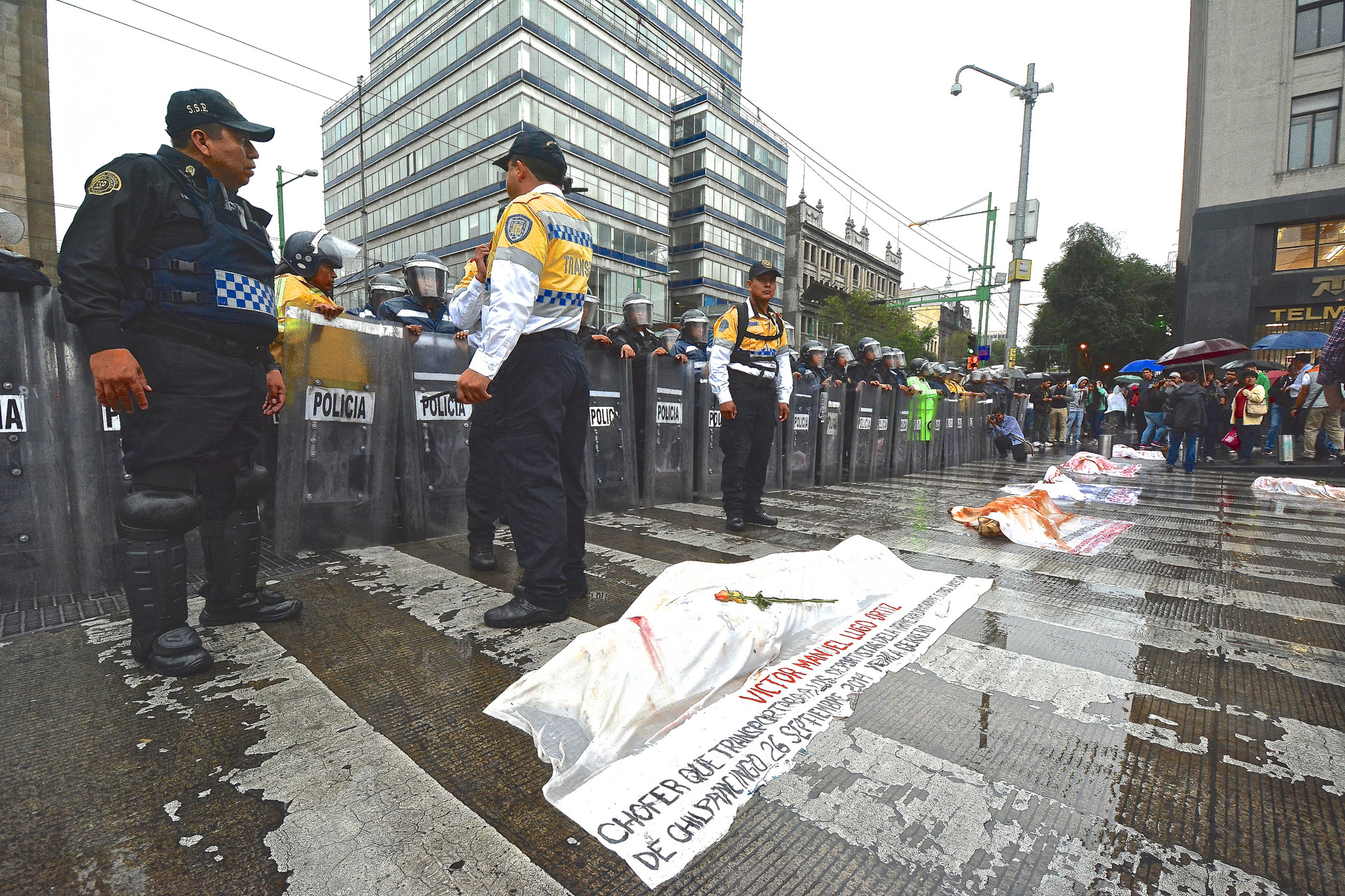 Mexico, John M. Ackerman wrote recently for Foreign Policy, “is not a functional democracy.” Instead, it’s a “repressive and corrupt” oligarchy propped up by a “blank check” from Washington.

Since 2008, that blank check has come to over $2.5 billion appropriated in security aid through the Mérida Initiative, a drug war security assistance program funded by Washington. Negotiated behind closed doors in the last years of the Bush administration, the plan was originally proposed as a three-year program. Yet Hillary Clinton’s State Department pushed aggressively to extend it, overseeing a drastic increase of the initiative that continues today.

Much of this aid goes to U.S.-based security, information, and technology contracting firms, who make millions peddling everything from helicopter training to communications equipment to night-vision goggles, surveillance aircrafts, and satellites.

This aid comes in addition to the direct sales of arms and other equipment to Mexico authorized by the State Department, as Christy Thorton pointed out in a 2014 New York Times op-ed. Those sales reached $1.2 billion in 2012 alone, the last full year of Clinton’s tenure. Indeed, as the Mérida Initiative has grown, Mexico has become one of the world’s biggest purchasers of U.S. military arms and equipment.

But while sales have boomed for U.S.-based contractors, the situation in Mexico has badly deteriorated. The escalation of U.S. counter-drug assistance in the country has paralleled a drastic increase in violence, fueling a drug war that’s killed more than 100,000 people since 2006.

High-profile human rights cases — such as the kidnapping and disappearance of the 43 students from the teacher-training college in Ayotzinapa, Guerrero in September 2014 — sparked renewed attention to the devastating effects of the U.S.-funded drug war in Mexico. Yet, they didn’t come out of nowhere.

Forced disappearances like these were ballooning even as Clinton was pushing Mérida Initiative programs forward, with official records reaching upwards of 3,000 to 4,000 people a year in 2011 and 2012. According to the United Nations, these widespread kidnappings and disappearances often involve state authorities, and the problem is worsened by the government’s failure to investigate.

U.S. laws explicitly prohibit the delivery of aid to foreign individuals and units implicated in systematic human rights violations. But files released by WikiLeaks revealed that Clinton’s State Department regularly received information on widespread “official corruption“ in Mexico, even as they were bolstering the flow of equipment, assistance, and training that ended up in the hands of abusive and compromised security forces.

Indeed, in 2009 and 2010 — the middle years of Clinton’s tenure at State — U.S. embassy cables boasted that intelligence and military cooperation between the two countries had never been better. Such cables, and the full archival orbit of declassified and leaked U.S. and Mexican records, demonstrate that Clinton’s State Department repeatedly cleared the delivery of U.S. assistance training and equipment to security forces implicated in corruption or abuse.

One document from June 2011 recorded a visit of U.S. officials to the northern state of Tamaulipas in May 2011 to assess training needs for state security forces. The visit came as Mexico’s federal authorities were trying to cover up the discovery of mass graves from the recent San Fernando massacres in the region. Even as U.S. officials were reporting on the Mexican government’s complicity and cover-up of the massacres, the U.S. embassy recommended further training for Tamaulipas security forces.

The same document also reports that Mexican immigration agents had been fired for kidnapping migrants. Yet the delivery of biometric data equipment to the same agency continued unimpeded.

In the southern state of Guerrero, meanwhile, records from 2009 to 2010 show that the U.S. embassy cleared local and federal police, military officials, and investigative agents for training and assistance from units implicated in human rights violations. Even then, the U.S. embassy — and not to mention reputable human rights groups — knew about the direct involvement of government officials in abuses there.

Human Rights Watch reported in 2011, for example, on widespread cases of torture in Guerrero going back to 1994. The group noted regular abuses by police and military forces, including “cases of homicide, torture, and extortion” overseen by the judicial police chief in the northern part of the state. The same report highlighted strong evidence of the involvement of military officials from Chilpancingo in cases of kidnapping and disappearances in 2010, as the U.S. embassy was clearing officials for training from the same military base.

After government security forces killed two students from the Ayotzinapa teacher training school during a protest in December 2011, U.S. Ambassador to Mexico Earl Anthony Wayne sent a cable reporting that “the evidence of heavy-handed police tactics is strong and disconcerting.” It was the same school where, less than three years later, 43 students would be disappeared — and six others killed — after being attacked by local police forces.

The implementation and delivery of this equipment took place hand-in-hand with private contractors. Major players like General Electric, Honeywell, Motorola, Sharp, IBM, and Dell appear throughout records of these transactions, along with scores of others — including Science Applications International, Rapiscan, American Science and Engineering, RCA, and many more.

Several contractors benefited significantly from helicopter deliveries and services in particular. These played a prominent role in both the conduct and the promotion of the broader drug war effort.

Three Sikorsky UH-60M Black Hawk helicopters, for example, were sent to Mexico’s federal police in November 2010. Just two weeks after their handover, they were deployed in the largest aerial operation conducted to date against the La Familia de Michoacán drug cartel. The U.S. embassy boasted in a secret cable that the operation — which reportedly led to the killing of drug kingpin Nazario Moreno Gonzalez, or “El Chayo” — was a “needed win“ for then-president Felipe Calderón in his increasingly unpopular war against the cartels.

El Chayo’s killing was the first clear evidence the State Department could highlight to show Congress that Calderón’s strategy — and the U.S. intelligence and security aid behind it — was leading to results. Yet the operation, which also caused large-scale civilian deaths, appeared to be in vain: The Mexican government reported that El Chayo was killed again, years later, in an operation carried out against the cartel in March 2014.

Nonetheless, the 2010 operation provided the justification to further ratchet up U.S. support. In May 2011, embassy staff accompanied Mexican federal police representatives to review an aircraft project in North Carolina and receive presentations from the AMCOM missile command and industry representatives. More aircrafts were subsequently delivered.

Sikorsky, along with other companies such as General Electric, continued to reap the benefits of the drug war in Mexico even after Clinton left the State Department. In March 2015, the department approved the sale of three Black Hawk helicopters to the Mexican military for $110 million. This followed a larger deal in April 2014 for 18 Black Hawks at $680 million.

Notably, several of the contractors that profited from U.S. security assistance in Mexico — such as General Electric, Lockheed Martin, and United Technologies Corporation, which owns Sikorsky — reportedly contributed to the Clinton Foundation. And according to the transparency group Open Secrets, Clinton currently tops the list of all 2016 presidential candidates in campaign contributions from the military contracting industry.

Back to Business as Usual

Naturally, Clinton herself was aware of how her department’s support for the Mexican drug war would look in light of the revelations about corruption and human rights abuses.

In January 2011, shortly after the release of a huge tranche of leaked diplomatic cables, Secretary Clinton apologized to her Mexican counterpart Patricia Espinosa for any “embarrassment” caused by the WikiLeaks documents, announcing her intention to get

“beyond WikiLeaks” and reaffirm the U.S.-Mexico relationship. Clinton expressed optimism that they could create a better “narrative” than the waste, fraud, and abuse revealed in the cables and regular media accounts and “explain to Congress why foreign assistance money under ‘Beyond Merida’ should continue.”

Getting beyond WikiLeaks, of course, meant getting back to business as usual — and back behind closed doors.

While thousands of Clinton’s own emails have since been released, the secrecy continues — with much of the important information still heavily redacted. For example, the emails contain potentially important documents, such as a memo to President Obama with a report on Clinton’s trip to Mexico City and Monterrey. This document, however, is completely redacted, except for one line.

In his piece for Foreign Policy, John Ackerman argued that Clinton’s defense of the status quo in Mexico is “grounded in a vicious cycle of complicities between economic and political elites on both sides of the border.” Indeed, the record available for public scrutiny shows that Clinton’s State Department — rather than addressing human rights concerns over the Mérida funding — focused on ensuring that security assistance continued in the face of abuse, cover-ups, and ongoing impunity.

Foreign Policy In Focus contributor Jesse Franzblau is a researcher and policy analyst. He’s worked on human rights documentation projects and assembled archival evidence for lawyers and judges working to advance transitional justice cases in Guatemala, at the Inter-American Human Rights Court, and in Spain. He’s written for The Nation, Al Jazeera, NACLA, The Intercept, Animal Político, and the Columbia Human Rights Law Review, among other publications.