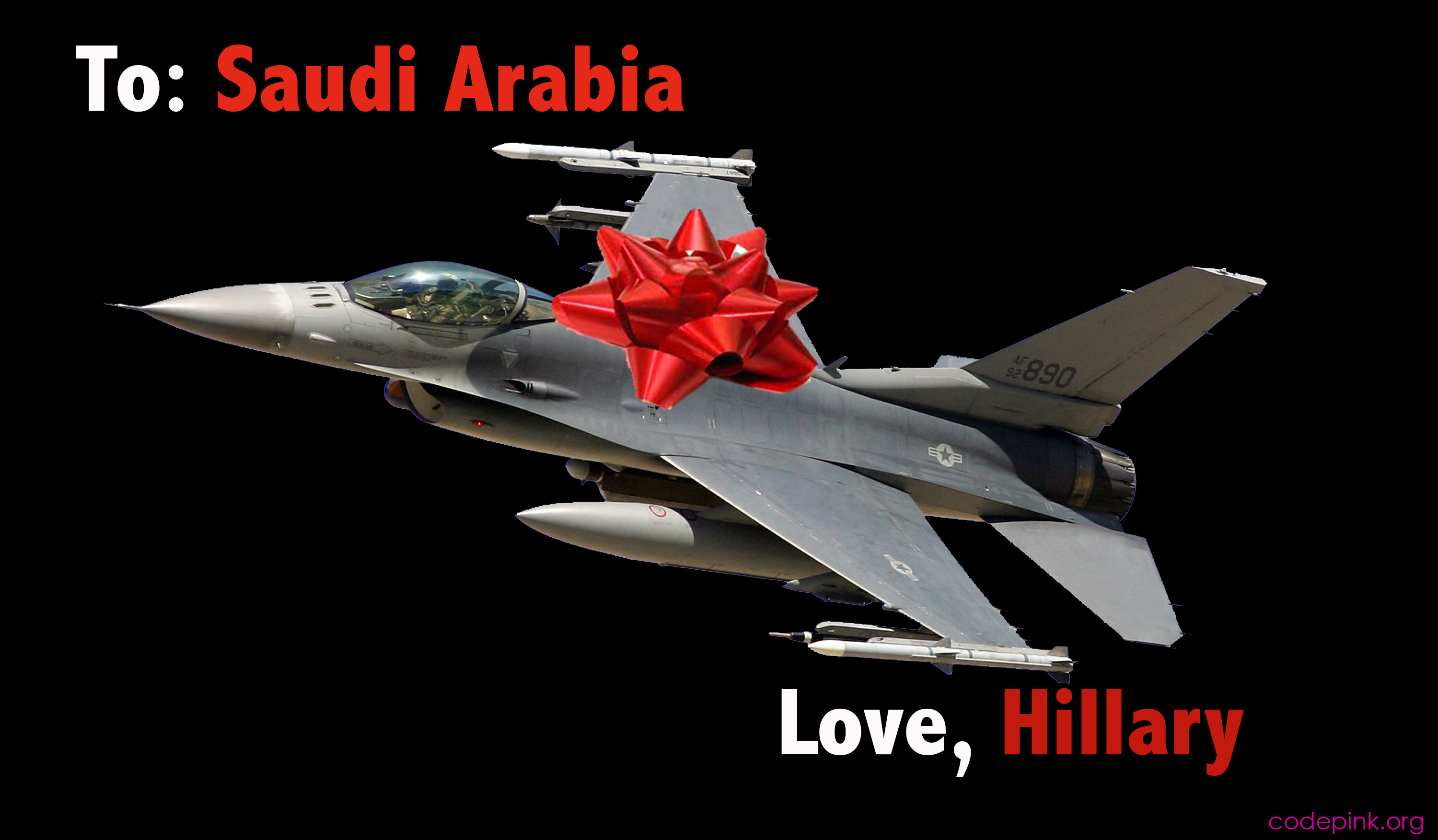 As Hillary Clinton emerges as the front-runner for the Democratic Party’s presidential candidate, she’s receiving increased scrutiny for her years as secretary of state — and in particular her hawkish foreign policy. Many critics are focusing especially on her long relationship with Saudi Arabia.

On Christmas Eve in 2011, Hillary Clinton and her closest aides celebrated a $29.4 billion sale of over 80 F-15 fighter jets, manufactured by U.S.-based Boeing Corporation, to Saudi Arabia. In a chain of enthusiastic emails, an aide exclaimed that it was “not a bad Christmas present.”

These are the very fighter jets the Saudis have been using to bomb Yemen since March 2015. A year later, at least 2,800 Yemeni civilians have been killed, mostly by airstrikes — and there’s no end in sight.

The indiscriminate Saudi strikes have killed journalists and ambulance drivers. They’ve hit the Chamber of Commerce, facilities supported by Médecins Sans Frontières (also known as Doctors Without Borders), a wedding hall, and a center for the blind. The attacks have also targeted ancient heritage sites in Yemen. International human rights organizations are saying that the Saudi-led strikes on Yemen may amount to war crimes.

During her tenure as secretary of state, Clinton made weapons transfers to the Saudi government a “top priority,” according to a new report published in The Intercept. And even while Clinton’s State Department was deeply invested in getting weapons to Saudi Arabia, the Clinton Foundation accepted millions of dollars in donations from both the Kingdom of Saudi Arabia and the weapons manufacturer Boeing. Christmas presents were being gifted all around.

Despite the brutal attacks on Yemen and its egregious domestic human rights violations, Saudi Arabia remains the number one U.S. ally in the Arab world. While the original U.S. interest was to secure Saudi’s vast oil reserves, today only 10 percent of oil used in the United States comes from the kingdom. Instead, U.S. dependence on Saudi oil has been superseded by U.S. dependence on weapons sales.

The most recent Saudi weapons deal was made in November 2015, a sale worth $1.29 billion that included 22,000 smart and general purpose bombs, and over 5,000 Joint Direct Attack Munitions kits to convert older bombs into precision-guided weapons using GPS signals. The Pentagon’s Defense Security Cooperation Agency justified the sales, saying they helped “sustain strong military-to-military relationships between the United States and Saudi Arabia.”

It’s hard to exaggerate the enormity and high-tech nature of Saudi weapons purchases. Indeed, the deals this decade constitute the most enormous military sales in history.

According to a White House press release in 2014, “The Kingdom of Saudi Arabia is the largest U.S. Foreign Military Sales customer, with active and open cases valued at approximately $97 billion, as Saudi forces build capabilities across the full spectrum of regional challenges.” The weapons include F-15 bombers, Apache and Blackhawk helicopters, missile defense systems, missiles, bombs, armored vehicles, and related equipment and services. Weapons manufacturers such as Boeing, Raytheon, Lockheed Martin, General Dynamics, and McDonnell Douglas have been unapologetically pushing these sales to offset military spending cuts in the United States and Europe.

While the U.S. government continues to provide massive amounts of weapons to Saudi Arabia, on February 25 the European Union took the extraordinary step of voting for an EU-wide arms embargo to Saudi Arabia. While non-binding, it’s a powerful statement that will put pressure on all European governments.

Already, government committees in the United Kingdom have urged Prime Minister David Cameron to suspend arms sales to Saudi Arabia; Germany has pledged to review all future arms sales to the kingdom; and in Belgium the government has denied an export license to ship weapons to the country. Canadian activists are also pressuring their government in light of Canada’s $15 billion transaction with Riyadh for weaponized armored vehicles, the biggest manufacturing export deal ever struck in Canada.

U.S. activists must follow the example of our European allies and demand that our government stop supplying the Saudi rulers with weapons to bomb civilians in Yemen and repress its own citizens.

Medea Benjamin is the co-founder of the peace group CODEPINK and the human rights organization Global Exchange. She is the author of eight books, including one about Saudi Arabia coming out in a few months.

Rebecca Green is the D.C. office coordinator at CODEPINK. She is a student at Northeastern University with a sociology degree and a minor in women’s gender and sexuality studies.