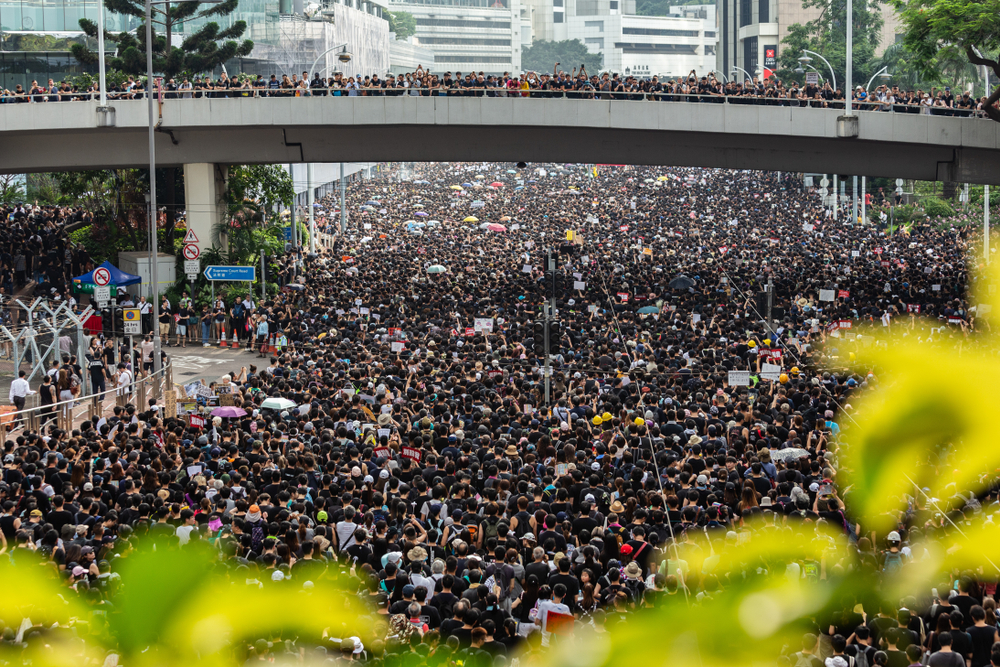 Hong Kong and the Future of China

Hong Kong’s protests are unlikely to spur major changes in the territory, much less on the mainland — but history suggests there’s a way forward.
By John Feffer | September 11, 2019

Something didn’t quite add up.

This past weekend, protestors were rallying outside the American embassy in Hong Kong. They were waving American flags. They were singing The Star-Spangled Banner. One 24-year-old protester wore a red Make America Great Again hat. Some signs at the protest read “President Trump, please liberate Hong Kong.”

“The Chinese government is breaking their promises to give freedom and human rights to Hong Kong,” the MAGA cap-wearer said. “We want to use the U.S. to push China to do what they promised over 20 years ago.”

First of all, the Trump administration cares not a whit about human rights. It’s not about to “liberate” Hong Kong any more than it was going to “liberate” the Rohingyas, the Venezuelans, the Iranians, or the Muslims in China’s Xinjiang province for that matter. With John Bolton now banished from the White House, the prospect of any kind of U.S. intervention has become even more remote.

Trump has called the protests “riots,” echoing Beijing’s rhetoric. He’s worried publicly that they are distracting from trade negotiations. MAGA hat aside, the U.S. president probably sees in the demonstrations a reflection of anti-Trump protests throughout the United States (and the world). Also, despite the trade war with Beijing, Trump has a fondness for Chinese leader Xi Jinping. He has even praised Xi’s handling of the crisis (though he has also suggested the Xi meet the protestors to resolve the crisis).

The protesters have a better chance of appealing to the U.S. Congress. Lawmakers from both sides of the aisle are currently considering the Hong Kong Human Rights and Democracy Act, which would allow Washington to impose sanctions on Mainland and Hong Kong officials who violate human rights and undermine the territory’s sovereignty. Even if it survives a Trump veto, however, the bill would not prevent Beijing from doing what it considers necessary.

Which, of course, is what the protesters have been doing.

Two versions of the future have been on display in Hong Kong over the summer. In one version, the people of Hong Kong not only preserve their autonomy but expand their limited democracy into true, one-person-one-vote representation — and this political system inexorably spreads to the rest of China. In the other version, the Mainland and its Hong Kong representatives suppress the protests as China consolidates territorial control: over Xinjiang and Tibet, over Hong Kong, and eventually over Taiwan and the waters of the South China Sea.

The United States, under Donald Trump or his successor, will have less and less to say or do about which of these versions become a reality. And it has nothing at all to offer in terms of a more viable third option that might emerge from the current crisis.

Origins of the Protest

The latest round of protests in Hong Kong began in March, when thousands took to the streets to protest amendments to an extradition law. Hong Kong residents have been concerned that, accused of some arbitrary crime, they might find themselves whisked away to the Mainland and its misrule of law.

This is not an abstract concern. Lam Wing Kee, a Hong Kong bookseller who sold texts critical of leaders in Beijing, was abducted in 2015, charged with “operating a bookstore illegally,” and detained for almost eight months in Mainland China. He was released back to Hong Kong with the understanding that he return to face trial.

An extradition law would effectively legalize these abductions. It would also apply to the 85,000 American citizens currently working in Hong Kong.

Protests over the extradition law grew larger and larger at the outset of summer until 1 million people thronged the streets on June 9, followed by 2 million a week later. Protesters took over the legislative building. They shut down the Hong Kong airport. They disrupted traffic on roadways. Fearful of surveillance, they have donned masks and even torn down “smart lampposts” designed to monitor traffic (but perhaps other things as well).

Although Hong Kong’s Chief Executive Carrie Lam eventually withdrew the amended law, the protests have continued. Protesters have four principal demands: an investigation into police brutality, amnesty for those arrested during the protest, a retraction of the designation of the June 12 protest as a “riot,” and Lam’s resignation followed by a free and fair election for her replacement. The last item is a revival of the platform of the Umbrella Movement of 2014, a sustained but ultimately unsuccessful attempt to achieve universal suffrage in the territory.

Lam is in a tough position, as she herself acknowledged in a leaked audio recording of a closed-door meeting of business leaders. Caught between Beijing and the protestors, she confessed that her maneuvering room is “very, very, very limited.”

Response from the Mainland

So far, Beijing has expected the Hong Kong authorities to deal with the challenge, though it has made various ominous statements about acts of terrorism, the involvement of the United States, and the unacceptability of the protesters’ demands.

Beijing has several options at this point. Chinese leader Xi Jinping could negotiate with the protesters, though this is unlikely. Xi wouldn’t want to show any weakness, particularly with the 70th anniversary of the country’s founding coming up on October 1. He could send in the army, a la Tiananmen Square 1989, and impose martial law in their territory. But that, too, is unlikely as long as the protestors don’t manage to seize the government and declare independence.

The leadership in Beijing may well be annoyed at what’s happening in Hong Kong. But this isn’t a Tiananmen Square situation. Protests are not popping up throughout the country in support of the actions in Hong Kong. Solidarity events have taken place in the United States, Germany, Britain, France, South Korea, Japan, Taiwan, and Australia. But on the Mainland, all is quiet, except for a few brave souls who have attempted to elude the censors to post information about what’s going on in Hong Kong.

It’s not possible to know how nearly 1.4 billion people think about anything, including a highly controversial topic like pro-democracy protests. However, given a steady diet of state-run media, the vast majority of Chinese likely view the protests in Hong Kong as simply disruptive. The events there have the flavor not of Tiananmen 1989 but rather the Cultural Revolution of the mid 1960s, when young people took to the streets and turned the world upside down, resulting in enormous pain and suffering.

To many mainlanders who believe the China model has benefited their economic development and their private lives, Hong Kong’s pursuit of democracy and freedom is not so attractive any more. They believe the mainland government is not perfect, but a messed-up government is worse. They fear political turbulence, poverty, foreign invasion — but not an authoritarian government. What’s worse, many believe the existing freedom Hong Kong enjoys is a “special treatment” that spoils the city. They believe the mainland has helped Hong Kong, but the city is ungrateful and constantly making trouble for China.

Since 1989, public opinion on the Mainland has moved inexorably in the direction of nationalism. The Chinese public tends to be rather hawkish in its orientation, with the younger generation more hardline than their parents. Few dissidents have stuck their necks out for protestors in Xinjiang or Tibet. Hong Kong, with its privileged status and myriad links to the West, has gotten even less sympathy.

Carrie Lam faces much the same dilemma that bedeviled Wojciech Jaruzelski in Poland in the 1980s. Jaruzelski was also an unelected leader caught between popular unrest at home and a much larger sponsor breathing down his neck. The Polish leader’s “solution” was to use the threat of a Soviet invasion to declare martial law in 1981 to suppress the rebellious Solidarity trade union.

Out of that experience, Polish protesters came up with a different strategy. Rather than push Jaruzelski up against the wall again, they developed (or, in fact, revived) the notion of a “self-limiting revolution.” Solidarity would continue to organize, quietly and persistently, but it wouldn’t make a direct bid for power. Later, when the opportunity arose, it would negotiate with the Communist government and come up with a compromise solution for the country’s first semi-free elections.

Meanwhile, on the other side of the world, the Chinese government, having failed to reach a similar modus operandi with the Tiananmen Square protesters, violently suppressed the pro-democracy movement.

The Hong Kong protesters could take a few important lessons from the Polish experience. They should acknowledge the possibility, however remote, of a military intervention by Beijing. They should realize that no one in such a scenario — not the people on the Mainland or the U.S. government — is going to come to their aid (except rhetorically). And they should look for opportunities to compromise with the Hong Kong authorities, securing incremental victories that shore up the territory’s autonomy and its semi-democratic structures.

In this way, the Hong Kong protesters must be willing to play the long game. Solidarity came up against the wall of Soviet intransigence in 1980. By 1989, however, Mikhail Gorbachev was in charge in Moscow and the compromise strategy became spectacularly successful.

Xi Jinping is no Mikhail Gorbachev. And he has declared himself leader for life. So, the movement in Hong Kong has to be even more patient, even more strategic, and even more determined than their Polish counterparts. Their time will come. When it does, they need to be ready not only to democratize Hong Kong but also contribute to reshaping the model on the Mainland as well.