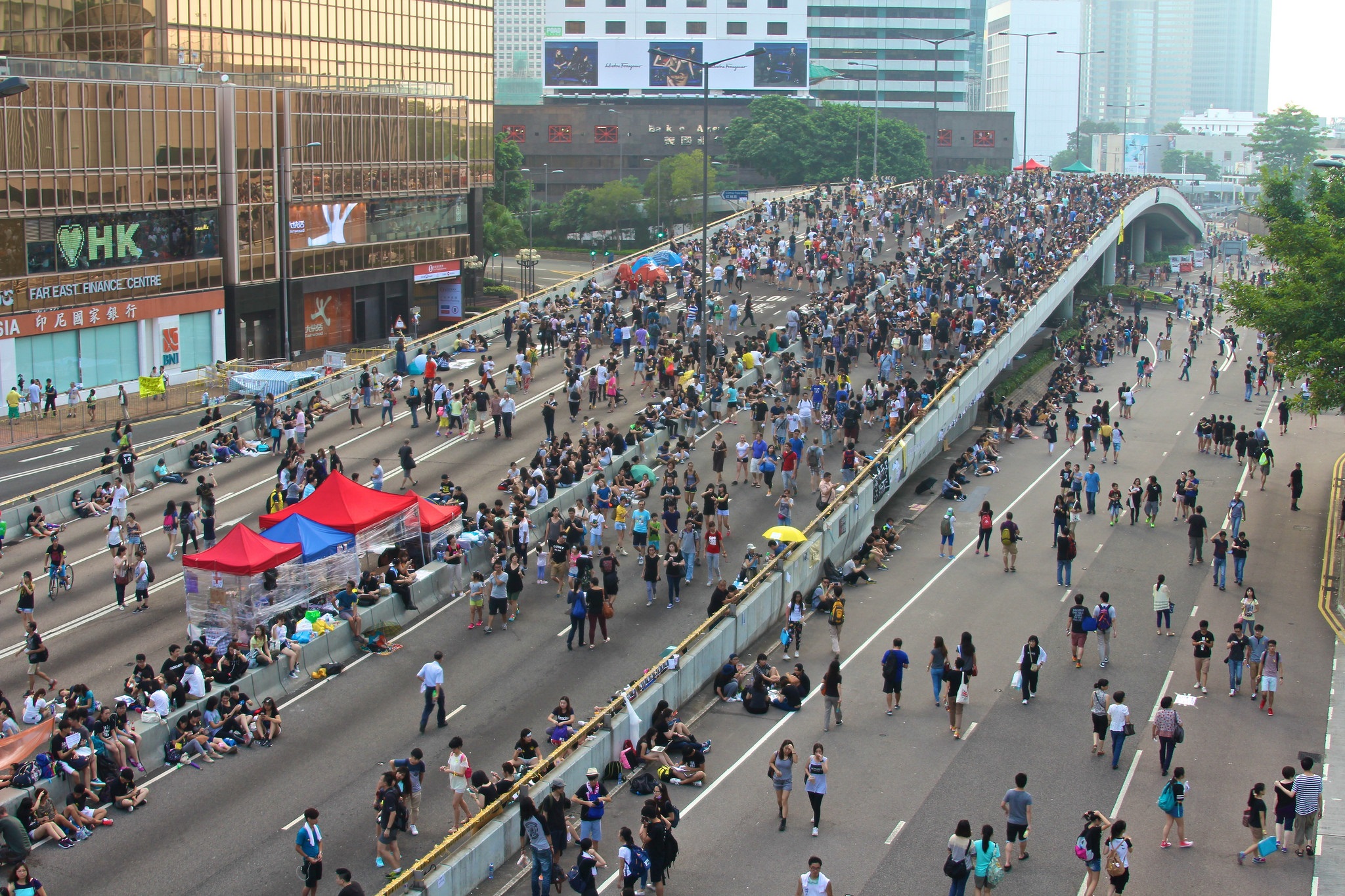 Hong Kong's "Occupy Central" movement is neither revolutionary nor subversive: It's a basic demand for a more responsive and accountable government.
By John Feffer | October 8, 2014

In 2000, I organized a meeting in China that brought together independent trade unionists, campaigners for corporate codes of conduct, and human rights advocates. We had spirited conversations about strikes and labor organizing and how to deal with the Communist authorities in Beijing. We didn’t worry about the government monitoring or breaking up our meeting.

True, we were in China, and the Chinese authorities have long been suspicious of independent labor organizing. But we weren’t exactly in China. We were in Hong Kong. One country, two very different realities.

When China took over Hong Kong from the British in 1997, it was under the auspices of “one country, two systems.” Beijing promised the residents of Hong Kong that they could essentially live under their own separate political and economic rules. At the time, this seemed like a great bargain for Beijing. Hong Kong was a typical entrepot, an open port city that celebrated good food, horse racing, and fast money. Taking back Hong Kong meant symbolically overcoming the humiliations of the Opium Wars of the 1840s, when the British grabbed the southern port, among other Chinese concessions. It also meant reabsorbing a territory that could connect the mainland even more firmly to the global economy.

In many ways Hong Kong hasn’t changed after the handover. Residents still enjoy individual freedoms, including the freedom to gather every year in Victoria Park on the anniversary of the army’s suppression of the Tiananmen Square protests. The press is freer than anywhere else in China, though there have been numerous complaints of government obstruction. While the process to get a visa to the mainland can be onerous, U.S. citizens can zip in and out of Hong Kong visa-free for three months at a time. Business continues as usual, and for the 20th year in a row Hong Kong tops the Heritage Foundation’s Index of Economic Freedom. The city has more billionaires per capita than any place in the world aside from Monaco and the two flyspecks of Guernsey and St. Kitts.

But Hong Kong is not just a playground for the rich. One in five residents lives below the poverty line. The city has the worst income inequality in Asia—higher than the mainland, higher than the notoriously divided Philippines. The lack of affordable housing and living wages brought as many as 200,000 people out into the streets in July 2011 to protest on the anniversary of the handover.

Beijing can handle protests that express economic grievances. It has to deal with those all around the country. Generally, the government hopes that a mixture of economic growth, targeted investments into promising sectors, the maintenance of state-owned enterprises, and an inconsistently applied anti-corruption campaign will eventually address these problems. A rising tide will lift a billion boats.

Political grievances are a different matter. Recently in Hong Kong, 200,000 people returned to the streets as part of Occupy Central, but this time their focus was on Beijing’s attempt to maintain political control over the city and its environs. Hong Kong’s political structures are a hybrid. Eligible voters among the population of 7 million residents choose half the legislative council, while various sectors grouped by function (labor, tourism, real estate) select the other half. In the last election in September 2012, the pro-Beijing parties retained their control of the council, though the opposition actually won more of the popular vote.

But the demonstrators are more concerned about the position of chief executive, which is chosen by an “election committee” that Beijing directs. The protestors want to choose their own candidates for the office. For the 2017 elections, Beijing is offering universal suffrage, but only after the authorities vet the candidates. Between these two options, a variety of compromises can be envisioned. But before coming to the table, the protestors had to prove that they had street power on their side. The many young people who have taken to the streets in Hong Kong have seen the success that their peers have achieved in Taiwan. They have seen the efforts of the “go-slow” faction in Hong Kong frustrated by the “go-slower” government in Beijing. And they are too young to have witnessed Tiananmen Square in 1989 and thus be overly cautious as a result.

The Occupy Central crowds have dwindled this week. The remaining protestors continue to block some roads, but they already compromised by allowing government workers return to their offices on Monday morning. The city authorities met on Monday evening with the Hong Kong Federation of Students and hammered out a framework for negotiations.

Some pundits have stepped forward to offer adult supervision for the protestors. “Let calm return to the City by the Harbor,” urges venture capitalist and political scientist Eric Li in The Washington Post. “Hong Kong needs problem solvers, not revolutionaries.” Li is worried about a Ukrainian or Egyptian scenario in which revolutionaries seize power and, whether they succeed or are overthrown in turn, produce “long periods of suffering and destruction.” Over at Asia Times, journalist Peter Lee confessed that “based on dismal results in places like Egypt, Pakistan, and Ukraine, I am not a big fan of the ‘student activists raise a ruckus in the main square’ brand of democracy. If Hong Kong democracy activists had wanted to give voice to the popular mood, instead of driving the opinion process through confrontational street action, they could have organized boycotts of the 2017 polls.”

Then there are the embarrassing accounts from Beijing and conspiracy-minded sites like the Center for Research on Globalization that depict what’s happening in Hong Kong as a “color revolution” manipulated by outsiders. But the young protestors are not interested in regime change in Hong Kong or secession from China. Indeed, they don’t want to be called revolutionaries. They sport umbrellas, not colors.

Li perceptively points out that economic concerns trump political ones for most residents of Hong Kong. Lee rightly notes that Beijing didn’t renege on a promise to allow universal suffrage for the 2017 election because it never planned to extend this principle to the selection of candidates.  But neither of these observations should detract from the importance of Occupy Central. It is a non-violent grassroots effort to make government more accountable to its citizens. Like many movements, particularly leaderless ones, it makes mistakes and overreaches itself. Still, it is responding to an authentic desire. And it is open to compromise.

I too am not happy about what has happened in Ukraine and Egypt. I don’t like to see a country descend into a civil war fueled by a covetous neighbor. I don’t like to see the military take over after a democratically elected government edged into authoritarianism. But these experiences do not discredit the techniques of non-violent protest any more than the election of idiot politicians discredits the techniques of democracy. Let’s judge the Hong Kong protests according to their specific strategies, demands, and context.

Beijing has legitimate concerns about the territorial integrity of the country. Unrest in Xinjiang and separatism in Tibet inform its view of what’s going on in Hong Kong. It continues to believe that democracy can be destabilizing, as even a small amount was for a disintegrating Soviet Union. When it took over Hong Kong in 1997, the Chinese leadership had a vision of the future that included Taiwan joining the mainland under the same principle of one country, two systems. Gradually the mainland too would democratize, and some day China would be one country with one system. Whether the one system is a freewheeling democracy like Australia’s, an “illiberal democracy” like Hungary’s, or more of the same one-party state that rules the mainland today depends a great deal on how Beijing accommodates the needs and demands of the people living in the former British port on China’s southern coast.

The residents of Hong Kong have more immediate concerns. They want jobs that pay a living wage, apartments with affordable rent, and a city that doesn’t just cater to the super-rich. They don’t want to lose the freedoms that they currently enjoy. And they want to have more of a say in their political affairs. As the discussion moves from the street to the negotiating table, Occupy Central deserves a lot of respect for showing that people power doesn’t necessarily lead to the break-up of a country or the declaration of martial law. If as a result Hong Kong can democratize its institutions and equalize its economic success, the city can point the way for the country as a whole.