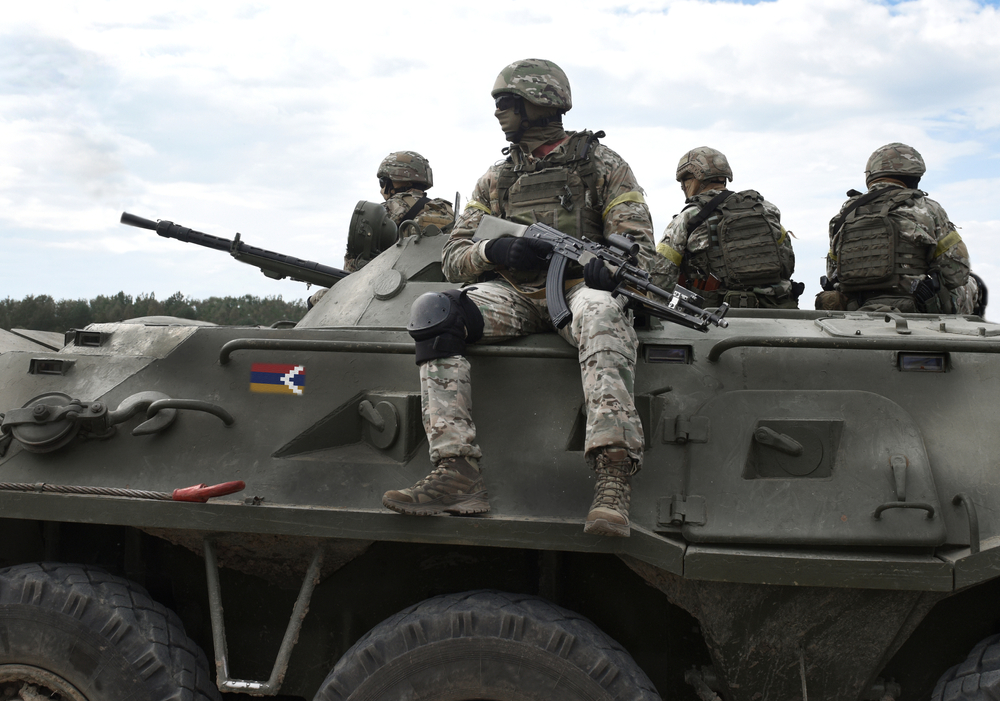 How Can Americans Support Peace in Nagorno-Karabakh?

The greatest danger is that Turkey, Russia, the U.S., or Iran should see some geopolitical advantage in escalating the conflict.
By Nicolas J.S. Davies | October 15, 2020

Americans are dealing with an upcoming general election, a pandemic that has killed over 200,000 of us, and corporate news media whose business model has degenerated to selling different versions of “The Trump Show” to their advertisers.

So who has time to pay attention to a new war halfway round the world?

But with so much of the world afflicted by 20 years of U.S.-led wars and the resulting political, humanitarian, and refugee crises, we can’t afford not to pay attention to the dangerous new outbreak of war between Armenia and Azerbaijan over Nagorno-Karabakh.

Armenia and Azerbaijan fought a bloody war over Nagorno-Karabakh from 1988 to 1994, by the end of which at least 30,000 people had been killed and a million or more had fled or been driven out of their homes. By 1994, Armenian forces had occupied Nagorno-Karabakh and seven surrounding districts, all internationally recognized as parts of Azerbaijan. But now the war has flared up again, hundreds of people have been killed, and both sides are shelling civilian targets and terrorizing each other’s civilian populations.

Nagorno-Karabakh has been an ethnically Armenian region for centuries. After the Persian Empire ceded this part of the Caucasus to Russia in the Treaty of Gulistan in 1813, the first census 10 years later identified Nagorno-Karabakh’s population as 91 percent Armenian. The USSR’s decision to assign Nagorno-Karabakh to the Azerbaijan SSR in 1923, like its decision to assign majority-Russian Crimea to the Ukrainian SSR in 1954, was an administrative decision whose dangerous consequences only became clear when the Soviet Union began to disintegrate in the late 1980s.

In 1988, responding to mass protests, the local parliament in Nagorno-Karabakh voted by 110-17 to request its transfer from the Azerbaijan SSR to the Armenian SSR, but the Soviet government rejected the request and inter-ethnic violence escalated. In 1991, Nagorno-Karabakh and the neighboring Armenian-majority Shahumyan region, held an independence referendum and declared independence from Azerbaijan as the Republic of Artsakh, its historic Armenian name.

When the war ended in 1994, Nagorno-Karabakh and most of the territory around it were in Armenian hands, and hundreds of thousands of refugees had fled in both directions.

There have been clashes since 1994, but the present conflict is the most dangerous and deadly. Since 1992, diplomatic negotiations to resolve the conflict have been led by the “Minsk Group,” formed by the Organization for Cooperation and Security in Europe (OSCE) and led by the United States, Russia, and France. In 2007, the Minsk Group met with Armenian and Azerbaijani officials in Madrid and proposed a framework for a political solution, known as the Madrid Principles.

The Madrid Principles would return five of the twelve districts of Shahumyan province to Azerbaijan, while the five districts of Naborno-Karabakh and two districts between Nagorno-Karabakh and Armenia would vote in a referendum to decide their future, which both parties would commit to accept the results of. All refugees would have the right to return to their old homes.

Ironically, one of the most vocal opponents of the Madrid Principles is the Armenian National Committee of America (ANCA), a lobby group for the Armenian diaspora in the United States. It supports Armenian claims to the entire disputed territory and does not trust Azerbaijan to respect the results of a referendum. It also wants the de facto government of the Republic of Artsakh to be allowed to join international negotiations on its future, which is probably a good idea.

On the other side, the Azerbaijani government of President Ilham Aliyev now has the full backing of Turkey for its demand that all Armenian forces must disarm or withdraw from the disputed region, which is still internationally recognized as part of Azerbaijan. Turkey is reportedly paying jihadi mercenaries from Turkish-occupied northern Syria to go and fight for Azerbaijan, raising the specter of Sunni extremists exacerbating a conflict between Christian Armenians and mostly Shiite Muslim Azeris.

On the face of it, despite these hardline positions, this brutal raging conflict should be possible to resolve by dividing the disputed territories between the two sides, as the Madrid Principles attempted to do. Meetings in Geneva and now Moscow seem to be making progress toward a ceasefire and a renewal of diplomacy. On Friday, October 9th, the two opposing foreign ministers met for the first time in Moscow, in a meeting mediated by Russian Foreign Minister Sergei Lavrov, and on Saturday they agreed to a temporary truce to recover bodies and exchange prisoners.

The greatest danger is that either Turkey, Russia, the U.S., or Iran should see some geopolitical advantage in escalating or becoming more involved in this conflict.

Azerbaijan launched its current offensive with the full backing of Turkey’s President Erdogan, who appears to be using it to demonstrate Turkey’s renewed power in the region and strengthen its position in conflicts and disputes over Syria, Libya, Cyprus, and oil exploration in the Eastern Mediterranean and the region in general. If that is the case, how long must this go on before Erdogan has made his point, and can Turkey control the violence it is unleashing, as it has so tragically failed to do in Syria?

Russia and Iran have nothing to gain and everything to lose from an escalating war between Armenia and Azerbaijan, and are both calling for peace. Armenia’s popular Prime Minister Nikol Pashinyan came to power after Armenia’s 2018 “Velvet Revolution” and has followed a policy of non-alignment between Russia and the West, even though Armenia is part of Russia’s CSTO military alliance.

Russia is committed to defend Armenia if it is attacked by Azerbaijan or Turkey, but has made it clear that that commitment does not extend to Nagorno-Karabakh. Iran is also more closely aligned with Armenia than Azerbaijan, but now its own large Azeri population has taken to the streets to support Azerbaijan and protest their government’s bias toward Armenia.

As for the destructive and destabilizing role the United States habitually plays in the greater Middle East, Americans should beware of any U.S. effort to exploit this conflict for self-serving U.S. ends. That could include fueling the conflict to undermine Armenia’s confidence in its alliance with Russia and draw Armenia into a more Western, pro-NATO alignment. Or the U.S. could exacerbate and exploit unrest in Iran’s Azeri community as part of its “maximum pressure” campaign against Iran.

At any suggestion that the U.S. is exploiting or planning to exploit this conflict for its own ends, Americans should remember the people of Armenia and Azerbaijan whose lives are being lost or destroyed every day that this war rages on, and should condemn and oppose any effort to prolong or worsen their pain and suffering for U.S. geopolitical advantage.

Instead the U.S. should fully cooperate with its partners in the OSCE’s Minsk Group to support a ceasefire and a lasting and stable negotiated peace that respects the human rights and self-determination of all the people of Armenia and Azerbaijan.

Nicolas J. S. Davies is an independent journalist, a researcher for CODEPINK and the author of Blood On Our Hands: the American Invasion and Destruction of Iraq.