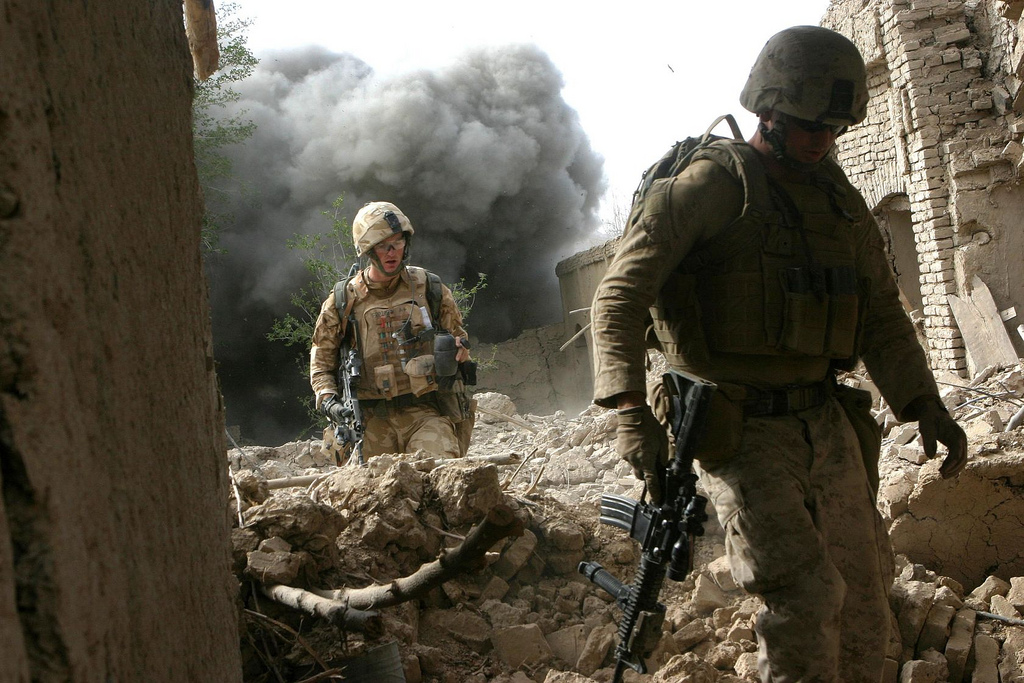 How Can We Prevent More Tragedies Like Kunduz? By Pulling Out U.S. Troops.

The best way to ensure that U.S. troops won't bomb any more civilian targets in Afghanistan is for President Obama to pull them out.
By Medea Benjamin | October 15, 2015

On October 6, the commander of U.S. armed forces in Afghanistan, General John Campbell, told the U.S. Senate Armed Services committee that the attack had been an accident. With CODEPINK protesters covered in fake blood in the background, Campbell assured the committee that the Pentagon was carrying out its own investigation, which would be “thorough, objective, and transparent.”

But Doctors Without Borders isn’t buying it.

The group says that the official stories from the U.S. military and the Afghan government changed four times in four days, from “collateral damage” to accidental bombing to charges that Taliban fighters were using the hospital as a base of operations — a claim the aid group strongly disputed. The Kunduz facility was the only free trauma care hospital in northern Afghanistan, treating 22,000 people and performing more than 5,900 surgical procedures in 2014.

On October 7, President Obama issued a formal apology for the attack. While Doctors Without Borders recognized Obama’s apology, it insisted that an apology wasn’t enough, since 22 people were killed and 300,000 people are now deprived of surgical and medical care in the Kunduz province. The group tied Washington’s response to the larger issue of respect for the Geneva Conventions, which is supposed to ensure protection for humanitarian groups providing life-saving services in conflict zones. Hospitals and other health facilities have been attacked in many countries — including Yemen, Sudan, Syria, Gaza, and Egypt — so holding the U.S. accountable in this case could have a much wider impact.

Thus Doctors Without Borders is calling for an independent investigation by the International Humanitarian Fact-Finding Commission, a body that was created in 1991 to investigate violations of international humanitarian law but has never been activated.

Dr. Joanne Liu, the group’s president, says “the tool exists, and it is time it is activated.” The commission has said it’s ready to undertake an investigation, but it can only open an inquiry with the consent of the international community. The request to activate the commission has to come from one of the 76 countries that recognize it (a grouping that includes neither the U.S. nor Afghanistan), and then all parties to the conflict must agree for the investigation to go forward.

The U.S., NATO, and the Afghan government all say they’re conducting their own investigations into the attack, but only an independent investigation can uncover the facts we need to demand accountability and new safeguards to ensure this type of tragedy doesn’t happen again. The Pentagon balks at the idea of an outside investigation, and some Republican lawmakers have publicly ridiculed the notion of an international body taking on the task. International pressure will be key to getting the U.S. government to submit to an impartial and transparent probe into the issue.

On October 10, the Pentagon said in a statement that it would make “condolence payments to civilian non-combatants injured, and the families of civilian non-combatants injured as a result of U.S. military operations.” The Pentagon also said it would make payments to repair the hospital, although it was unclear to whom they would be making payments, since Doctors Without Borders doesn’t accept government money for its work in conflict zones.

But more is needed. The bombing should also be a moment to reflect on the 14 years of U.S. intervention in Afghanistan. This intervention has cost the lives of 2,350 U.S. servicemen and women, plus the lives of thousands of Afghans and service members from our NATO partners. It’s cost U.S. taxpayers over a trillion dollars, money that could have made an enormous difference funding vital domestic needs.

And what do we have to show for it?

Despite 14 years of U.S. involvement — at an estimated cost of $33,000 for every man, woman, and child in Afghanistan, or $14 million per hour since 9/11, according to one study — Afghanistan remains mired in poverty, corruption, and political strife.

Despite the massive amount of effort spent on women’s empowerment, Afghanistan remains a deeply misogynist culture where only 17 percent of women can read and write. Despite the vast resources invested in training and equipping the Afghan army, Afghan soldiers have not been able rout the Taliban, and General Campbell himself has admitted that the Afghan police and military — which receive over 90 percent of their funding from U.S. taxpayer dollars — are totally unsustainable.

The American people have long soured on continued military involvement in Afghanistan. Responding to public sentiment, President Obama promised to cut the current force of 10,000 U.S. troops in half by 2016. In March, however, the president announced he would slow the pace of troop withdrawal and now — with the resurgence of the Taliban — there’s a call by some congressional representatives to keep the troops there for years to come. There is even talk of sending more troops.

Most recently, the White House announced that it would keep some 5,500 troops in the country past 2017, flipping once more on its promise to wind the war down. But more troops, and the continued presence of existing U.S. forces, will only ensure a continuation of the conflict.

The Kunduz bombing is really a symptom of the underlying disease: foreign occupation.

Yes, we must press for an independent investigation of the bombing, for this might help protect hospitals and clinics in all conflict zones. But in Afghanistan, the best way to ensure that the U.S. military will not bomb any more civilian targets is for President Obama to pull them out. As long as U.S. troops are there, militants will fight to oust them.

The ills afflicting the Afghan people require a political solution that includes the withdrawal of all foreign forces. That’s the only long-term cure.