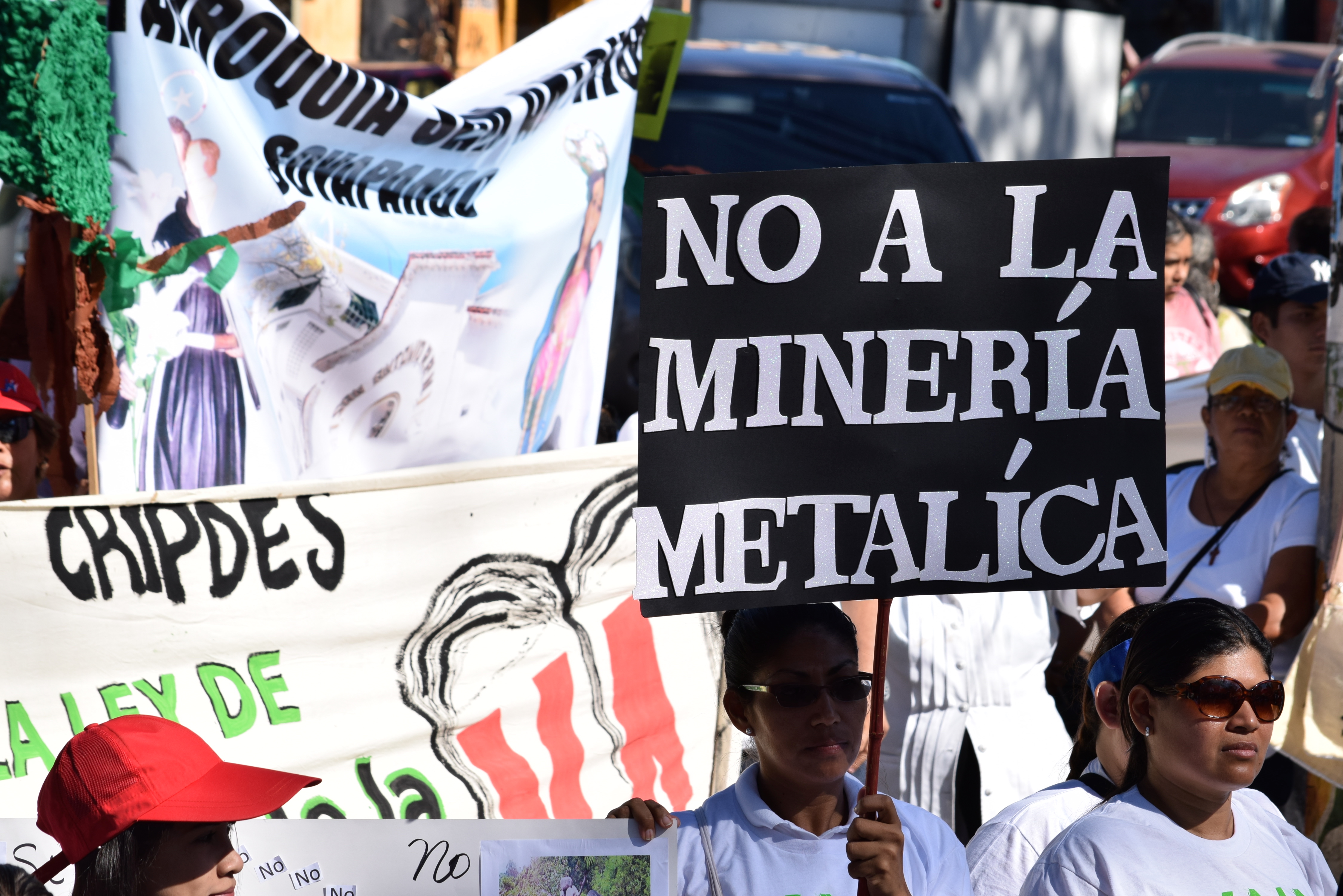 U.S. environmentalists take note: El Salvador's activists proved that a national consensus on environmentalism can be forged one town at a time.
By Yevgeniya Yatsenko, Sebastian Rosemont | June 21, 2017

Amid a natural gas boom, could U.S. activists ever dream of a national ban on fracking? If it seems impossible, they should look to the south for inspiration.

On March 29, the small Central American nation of El Salvador passed a total ban on metal mining. The historic vote on the law was unanimous, bridging strong partisan divides, and was the culmination of more than a decade of activism, coalition building, and direct political participation by the people of El Salvador.

The arguments placing life and water over gold took root, uniting the entire nation under the banner “No to mining, yes to life!” Local efforts were key to winning this hard-fought national consensus.

In the years leading up to the vote, while facing a largely unresponsive government, Salvadoran citizens, with the help of local organizations, used the community referendum process as a legally binding tool to take direct political action. Since 2014, five municipalities in key mining zones voted overwhelmingly to block mining within their borders.

This was not unlike efforts in some U.S. communities and states that have voted to ban fracking and passed municipal ordinances against the practice, creating legal precedent to bolster anti-fracking grassroots movements in different corners of the country.

In El Salvador, the municipal referendums proved to be a powerful force, with ripple effects all across the country. In the municipality of Cinquera, a referendum at the end of February kept the issue front and center just weeks before the national General Assembly voted to pass a blanket law against metallic mining.

Seen against the backdrop of the decades-long fight against mining, the vote in Cinquera showed how it was possible even in the struggling economy of El Salvador to persuade the population to say no to big money. 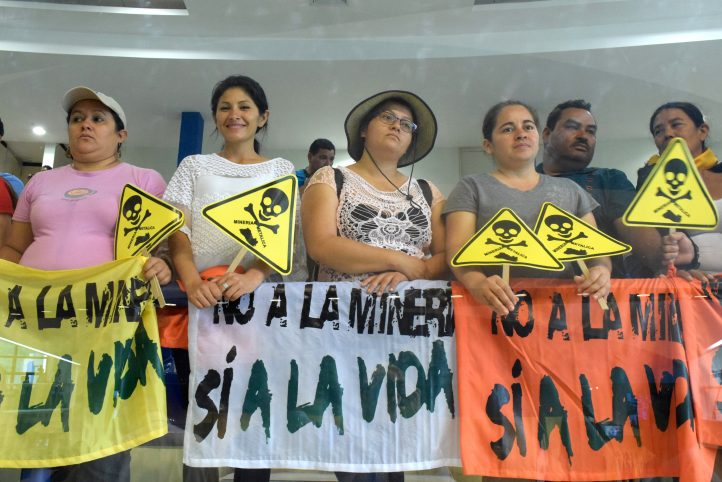 The process of citizen mobilization and education did not prove easy for the organizers of the Cinquera referendum. Political allegiances run deep and play an important role in the community. About half of the population strongly supports the left-wing FMLN while the other half flocks behind the right-wing ARENA party. In addition, many residents are farmers who have never seen the effects of a mining project first hand.

CRIPDES had shepherded four referendums before the one in Cinquera and had a well-defined role to play: education and partnership.

The key, said Bernardo Belloso, CRIPDES president, was to get the community talking long before the vote. “We made sure there were workshops so that the people could learn what a model of extraction consists of, and why they might want a ban,” Belloso said. The organization also played a crucial role partnering with the communities, “particularly the teams that collected signatures and implemented the referendum, and the council when it called the referendum.”

The active presence of local organizations such as ARDM and ADESCOs in Cinquera, as was the case with the previous four municipalities, was one of the key factors in the eventual success of the referendum. Community organizations bring to the table their inside knowledge of community dynamics and village politics, and their connections with the youth activist base. Most importantly, they know how to get local people to one place and get them to listen.

While CRIPDES provided the research and materials, they relied on the local community organizations to throw parties where there was music and pupusas (the ubiquitous Salvadoran dish), and a healthy serving of information on mining. The leaders of the two Cinquera community associations made sure that residents with different political leanings were invited to the same events. They drew younger people into the effort, too.

The organizers were able to span political divisions and greatly extend their appeal by emphasizing that the fight against mining was not a political issue. Milton Arias, an FMLN alderman on the Cinquera Municipal Council, said the emphasis was always on protecting the environment.

“If a mining project comes to the municipality, it is going to affect us all equally,” Arias said. “In this sense, the ideological issues, talking about those between right and left, we didn’t see those so much in the referendum process. The population saw the referendum as separate from the political parties.”

No one, Belloso said, disputed the key facts.

El Salvador’s 6 million people rely on a fragile water supply. According to the Ministry of the Environment and Natural Resources, 90 percent of the country’s rivers and streams suffer from some level of contamination. Mining is water-intensive and comes with a high risk of polluting this key and limited resource.

By organizing family parties where politics were put aside, a handful of youth organizers found initial support. Soft-spoken mothers with children and energetic young people all joined in, at first listening and then helping spread the message: Cinquera would vote “NO” to mining.

Each step in the process expanded the base of support. To hold a referendum at all required 40 percent of eligible voters’ signatures.

The recruitment of outspoken supporters was a necessary step that helped to energize the campaign. Over several months, volunteers went door to door in all four towns that comprise the municipality of Cinquera, talking about the issue and working tirelessly to hit the signature threshold. 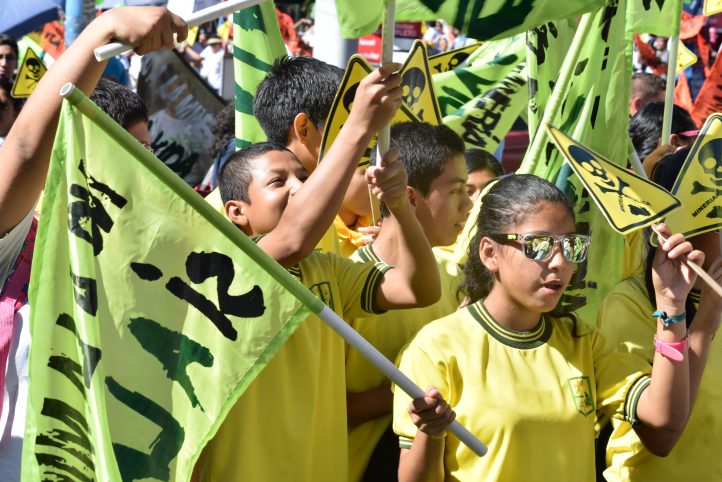 The Cinquera referendum played out against a backdrop of a long legal battle between the country and mining companies. Unlike many of its Central American neighbors, mining barely had a toehold in El Salvador. The last active mining project shut down in 2006 when it lost its license to operate on environmental grounds.

But if the mining sector lacked the political clout it enjoys elsewhere in the region, it was far from dormant.

The Canadian firm Au Martinique Silver aimed to mine the rich hills in the state of Chalatenango in the north of the country. Its plans would have swept up communities similar to Cinquera, but community resistance forced the company to abandon its plans. Four of those threatened municipalities later held referendums to guard against future attempts.

The country’s resistance to mining gained international attention after the government imposed a temporary nationwide mining ban in 2008. The move scuttled the ambitions of the Canadian firm Pacific Rim, which had hoped to mine gold in the watershed of the Lempa River, El Salvador’s main water source. The company sued the government for $250 million under free trade rules, a suit that only grew after the Australian-Canadian company OceanaGold acquired Pacific Rim.

The legal dispute turned deadly. Several anti-mining activists were murdered in the state of Cabañas, where the company planned to mine.

OceanaGold’s case was heard by an international tribunal overseen by the World Bank. In 2016, about the time the referendum process in Cinquera got underway, the company lost and was ordered to pay El Salvador $8 million to compensate for legal fees. OceanaGold disputed that too and has yet to pay.

The suit — and lack of a thorough government investigation into the murders — strengthened the resolve of the anti-mining movement and gave them the moral high ground. Hundreds of local and national-level groups and organizations gathered under the unifying cry of “No to mining, yes to life” to stage protests, hold events, and carry on the momentum.

Arely Cartagena agreed to talk to us, but very quickly, because her little daughter was getting restless, incessantly pulling at her skirt and asking to go home. Parents with kids are a common sight in Cinquera, where mothers and fathers bring their little children to meetings and marches.

Cartagena moved to Cinquera in 1991, as part of a resettlement movement after El Salvador’s civil war ended. She said she was drawn by the surrounding hills with their lush forests and clear waterfalls.

She saw mining as a direct threat.

Cartagena became a member of the municipal council and was one of the first members of the referendum organizing committee. She said her fellow residents responded well to her simple message: They too had children and grandchildren, and would want them to grow up among the forests and the waterfalls, free of contamination.

Cartagena saw how the number of signatures grew, exceeding the minimum threshold of 40 percent in a matter of two months. The street banners and murals denouncing mining projects appeared in different parts of the town. She grew confident that the referendum would pass.

The day of the referendum, the 28th of February, many citizens flocked to the voting stations well before the scheduled opening time. Cartagena and many others celebrated when the results were announced. Over 98 percent of Cinquerans voted “NO” to mining.

From the civil society perspective, municipal referendums have served as an empowering device for communities all across El Salvador. As with the anti-mining law that just passed, the citizens of El Salvador have seen that they have the power to ignite the entire country — and the politicians will follow.

They’ve created something that can last for generations to come: the awakened conscience of a people who are well organized and well aware of their role in the political process of their country.

The anti-fracking movement in the United States has seen very similar development. Coalition-building and reliance on civil groups have helped bring ordinary citizens into the struggle. Meanwhile, they’ve enjoyed the strong backing of the scientific community, which has concluded that fracking is one of the most polluting, environmentally unfriendly methods of resource extraction.

As in El Salvador, this movement too has all the potential to keep growing — and to cross political lines within communities that want to protect their health and way of life.

Yevgeniya Yatsenko has a BA in Anthropology and International Development from McGill University. She is currently working in El Salvador on the issues of alternative development. Sebastian Rosemont is a fellow McGill graduate and a contributor to Foreign Policy In Focus.