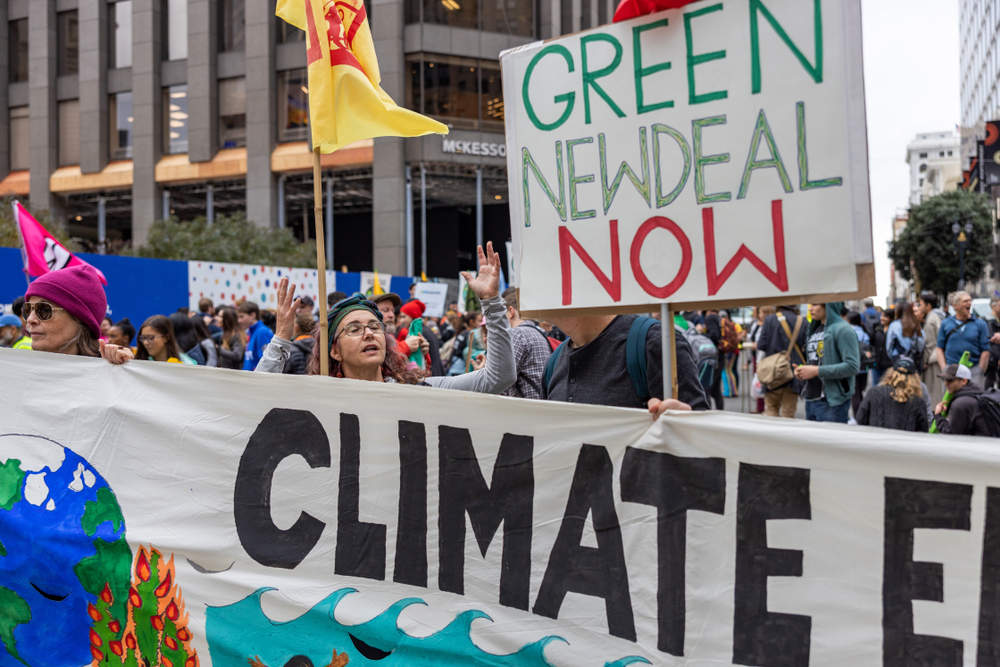 How to Truly ‘Build Back Better’ on Climate

The Build Back Better program isn’t just inadequate on climate—it may be a disaster. Here’s what movements are demanding next.
By Basav Sen | October 27, 2021

This commentary was jointly produced by In These Times and Foreign Policy In Focus.

The infrastructure and budget reconciliation bills moving through Congress are a mixed bag when it comes to health care, income support programs, and the care economy.

On climate and environmental issues, however, they are not just inadequate but disastrous. They represent, at best, a huge lost opportunity to tackle the climate crisis at the required scale nationally.

One rogue legislator, Joe Manchin (D‑W.V.), who has deep fossil fuel industry ties and is himself a coal baron, is hell-bent on preserving fossil fuel subsidies and gutting the proposed Clean Electricity Payments Program. That program was flawed to begin with, but thanks to Manchin’s intervention, fossil fueled power plants could end up getting handouts that were supposed to subsidize clean energy.

Not only is there no assurance that the proposed laws will eliminate existing fossil fuel subsidies, but they actually introduce new subsidies for fossil fuels by supporting fictional technologies like carbon capture and ​“clean” hydrogen.

The bipartisan bill also weakens the National Environmental Policy Act (NEPA), one of the few legal tools available to communities to fight environmentally destructive projects. And it continues the harmful U.S. tradition of overfunding highways and underfunding public transportation.

Critique isn’t enough, though. As a climate justice movement, we need to articulate clear alternatives, even if they’re pronounced ​“politically infeasible” by insiders. Political feasibility is not an immutable law of nature — it can be transformed by visionary movement-building and organizing.

The first step is actually making the demand. So here’s an overview of what the climate legislation we actually need could look like, drawn from existing movement demands.

For starters, Congress should embrace the Hippocratic principle of doing no harm. That would mean ending all fossil fuel subsidies, including subsidies for green-washed fossil fuels such as carbon capture—something more than 500 organizations have signed an open letter calling for.

Next, Congress needs to set an ambitious timetable for transitioning to renewable energy.

It should enact a legally binding renewable energy standard for the electricity sector at the national level, effectively mandating a transition off fossil fuels and onto renewables. That way, we wouldn’t need to rely on today’s patchwork of state Renewable Portfolio Standards—which are strong in some states, weak in others, and expired, voluntary, or non-existent in 23 states.

This standard must define renewable energy carefully to exclude harmful, polluting energy sources such as nuclear energy, waste incineration, and biomass combustion. More than 700 organizations have called for such a federal standard.

A federal renewable energy mandate is also an opportunity to use federal funding to expand community ownership of renewable energy generation capacity, starting with the frontline communities who have borne the disproportionate burden of pollution from our dirty energy system.

Federal climate legislation should increase funding for public transit by an order of magnitude to make up for decades of intentional underfunding. The Green New Deal Network calls for $600 billion in transit funding—compared to just $49 billion in the Build Back Better Act and bipartisan infrastructure package combined.

At the same time, it should cut federal highway spending, eliminate funding for expanding highways and major roads, and condition aid to state and local governments for road maintenance and repair on those governments agreeing to freeze all roadway expansion.

It should also provide adequate federal funding for school districts, transit agencies, and other public vehicle fleets nationwide to transition to electric vehicles on an accelerated timeline, prioritizing the most polluted areas first.

This is just a snapshot. A visionary climate bill must also include major investments in safe, healthy, energy-efficient residential and public buildings, water infrastructure that assures clean water for everyone in an age of climate change, federal assistance to farmers to transition to ecologically sound farming methods, and more.

Importantly, all of these investments must assure a just transition for communities and workers, as articulated with clarity and power by the Climate Justice Alliance. Frontline communities that have borne the brunt of fossil-fuel pollution must be first in line to benefit from the transition.

This would require significant funding flowing to these communities for energy, transportation, housing, and other infrastructure that addresses critical needs identified by community members. The proposed federal Justice40 initiative, which would ensure that 40 percent of federal climate and environmental spending is allocated to frontline communities, is only a small step in this direction.

No federally permitted energy, transportation, or other projects should occur without the consent of the people whose benefit they’re purportedly for, or the people who will be most impacted by the project. For projects on Indigenous lands in particular, the global legal standard of Free, Prior and Informed Consent must be followed.

No visionary climate bill would be complete without requiring that the millions of jobs that will inevitably be created be good jobs that pay livable wages, provide good benefits and safe and healthy working conditions, and assure the right to unionize without employer coercion and intimidation.

The legislation should ensure priority hiring for people from frontline communities, formerly incarcerated people, and displaced fossil fuel workers. The Labor Network for Sustainability makes a compelling case for workers’ rights in an economy-wide transition to address the climate crisis.

From Executive Action to Direct Action

Unfortunately, the prospects for such legislation are slim to nonexistent today. What then are some ways forward for federal climate policy? There are two paths forward, and we must pursue both.

First, the president has a tremendous amount of executive power on climate, especially in the arena of fossil fuel supply.

Executive branch agencies can end leasing for oil and gas drilling on federal lands and in federal waters. They can stop issuing permits for new fossil fuel projects such as pipelines, refineries, petrochemical facilities and export terminals. They can revoke permits that were issued without adequate consideration of their dangers, such as for the Line 3 tar sands pipeline in Minnesota and the Formosa Plastics facility in Louisiana (which the EPA has temporarily halted for further review, but not stopped altogether).

After making a promising beginning by canceling the Keystone XL pipeline, Biden has not demonstrated much willingness to use these powers. So movements will need to press him on it.

That’s why thousands of people converged in Washington, D.C. from October 11 to 15 for the People vs. Fossil Fuels actions to demand that Biden use his executive authority to stop fossil fuel infrastructure, and 655 people were arrested for civil disobedience (including me). The actions were led by the predominantly Indigenous, Black, and brown communities next to fracking fields, in the path of pipelines, and in the shadow of refinery and petrochemical facilities.

This was followed by 13 members of Congress sending a letter to Biden reinforcing the demands of the People vs. Fossil Fuels mobilization. Our movements need to keep up the pressure on Biden — in the streets, in the media, and with allies in Congress — to deliver on these demands.

Second, we need to keep up the national visibility of our demands, setting the stage for actual legislative wins on climate in subsequent years.

The later it gets, the more dire our climate emergency becomes. Defeat isn’t an option — we must escalate political pressure on Congress and the administration to compel them to act next year. And this must include undoing the damage done by the legislation that passes this year, such as carbon capture subsidies and highway expansion funding.

This may sound easier said than done.

But social movements led by the most affected people have shaped the course of human history, and can win again. If that wasn’t the case, we would still be living in a world of Jim Crow segregation in the U.S. South, apartheid in South Africa, and British Empire in India. With the right vision, social movements can transform our fossil fuel economy, too.