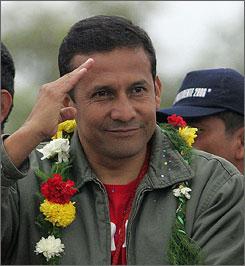 Half a year into his presidency, Peru's Ollanta Humala has not been the Chavez clone his critics predicted.
By W. Alex Sanchez | February 6, 2012

As per tradition in Latin American politics, election season means vicious personal attacks against individuals running for office. In Peru, the 2011 campaign season saw Ollanta Humala of the Peruvian Nationalist Party attacked for his friendship with Venezuelan leader Hugo Chávez, as well as for the legacy of his brother Antauro, currently in prison for leading a failed uprising in January 2005 that left several police officers dead in the Andean town of Andahuaylas.

And yet, after half a year in power, the worst right-wing predictions about Humala’s government have yet to come true, casting doubt on his critics’ claim that Humala would be a “clone” of the eccentric Venezuelan president.

Even now, commentaries continue to appear about whether Humala is the Peruvian version of Chávez; similar discussions abound regarding presidents Evo Morales in Bolivia and Rafael Correa in Ecuador. According to the current rhetoric, as exemplified by statements from former Peruvian President Alejandro Toledo, Humala is trying to militarize his government. These accusations took root in December 2011, when Salomon Lerner resigned as prime minister and Ollanta appointed Oscar Valdés Dancuart, a retired lieutenant colonel close to the president, as his successor.

But Humala has not carried out the repressive measures that critics predicted he would. Even before he won the elections, Humala campaigned on a fairly moderate platform, promising not to change the economic model that has brought a great deal of economic growth to Peru in the last few years, and vowing not to become a new Chávez. During the campaign, Humala also asked Chávez to stop calling him a “soldado” (soldier), as he is no longer in the military.

Yet Humala has not renounced his friendship with Chávez either. During an early January trip to Venezuela, Humala gave his Venezuelan counterpart a book with the speeches of former Peruvian military president, General Juan Velasco Alvarado. The two countries are currently in negotiations to sign a trade integration agreement. Due to his economic initiatives, Humala has been compared to Brazil’s former president Lula, who led the Portuguese-speaking nation through a decade of financial and diplomatic growth.

Interestingly, there has been no speculation that Ollanta could become like former Peruvian dictator Alberto Fujimori, who replaced key government posts before his famous “auto golpe” (self-coup) in April 1992, in which he dissolved the Peruvian congress and eventually wrote a new constitution in 1993.

The Case against the Chávez Comparison

Since taking office, Humala has neither nationalized major industries nor carried out censorship initiatives against opposition parties and the Peruvian media. Indeed, so far he has not cracked down on opposition members, allowing them to continue their attacks against the head of state. In addition, the Peruvian economy is expected to grow 5.5 percent in 2012, while tourism in the Andean country is expected to grow 12-14 percent. Far from nationalizing private industries, Humala recently traveled to Spain to court foreign investment. Nor has the Peruvian leader freed his brother Antauro from prison, despite accusations during the campaign that he would.

On the other hand, a December 2011 report in the Chilean daily La Tercera pointed out that Valdés’ appointment marks the first time since the Peruvian military governments of 1968-1980 that the two most important offices, those of the president and the prime minister, are occupied by military officers. Also in an important position is Adrian Villafuerte, Humala’s national advisor on security issues and a retired colonel himself.

Nevertheless, contrary to military regimes past, Humala was democratically chosen in elections that have been internationally recognized as free and fair. Moreover, it is only expected that, as president, he would appoint capable individuals that he knows and trusts. The majority of Peruvian ministry positions remain in the hands of civilians. In any case, rather than behaving like a dictator-in-the-making, Humala enjoys a 54.5-percent approval rating after six months in office.

There is yet another difference between Humala and Chávez that is often overlooked. Supposedly a revolutionary socialist, Chávez has often been accused of supporting the Colombian guerrilla FARC movement, though whether in a material or moral capacity is a subject of some dispute. But contrary to the Venezuelan leader’s alleged pro-FARC stance, the Peruvian government continues to see the Colombian insurgent group as a security threat. Recently, Peruvian Admiral Jose Cueto Aservi stated that his naval forces will ensure that the Colombian insurgents do not enter Peruvian territory.

Humala’s government has also prevented a new organization called the Movement for Amnesty and Fundamental Rights (MOVADEF) from becoming a legitimate political party because of its ties to the Shining Path. The Peruvian Times reports that Peruvian lawmakers, pushed by Ollanta’s cabinet of ministers, are expected to approve “a bill that would prevent political movements with links to insurgents and other violent groups from becoming registered political parties and participating in local and national elections.” Bowing to government and civil society pressure, MOVADEF recently declared that it will stop attempting to become a political party. Meanwhile, Humala’s Education Minister, Patricia Salas, has declared that new school textbooks will explicitly explain how Shining Path and the MRTA are terrorist organizations. It seems clear that Humala will hardly be an apologist or supporter of radical violent movements, whether at home or abroad.

A critical situation is currently developing in Cajamarca, a region in northern Peru where local inhabitants are protesting against a proposed $4-8 billion mining project. The local population believes that the mine will pollute local water sources, which are critical for both human consumption and irrigation projects. After major protests in late 2011, the project was suspended in December.

For Humala, the Conga project poses a dilemma. On the one hand, if Humala openly supports the local population, he could potentially scare international investors, which the country’s political opposition would quickly capitalize on. Opposition politicians have already attacked Humala on the Conga issue, charging that the protests there and social unrest elsewhere in the country are examples of Humala’s lack of leadership skills.

On the other hand, by siding with the investors, the president risks alienating the local population, a move that could cost him dearly in future polls, referenda, and elections (although it is important to mention that Peru’s constitution does not permit direct presidential re-election). In November 2011, Humala tried to appease both groups by declaring in a speech that the Conga mine was “important” to Peru but that he also supported local communities.

Humala and Washington in 2012

Recent U.S. administrations have faced an increasingly complicated relationship with Latin America, particularly due to the rise of anti-Washington governments in the region. Currently the United States enjoys strong relations with only a handful of Latin American states, like Mexico, Colombia, and Chile. Washington also maintains generally good relations with the governments of Brazil and Argentina, as well as smaller countries like Panama, with whom, along with Colombia, the United States recently ratified controversial free-trade agreements. Meanwhile, “Pink Tide” leaders like Chávez, Morales, and Correa have had increasingly tense diplomatic relations with Washington ever since they came to power. In one of the most recent incidents, the United States expelled Livia Acosta Noguera, a Venezuelan consular official in Miami, for her alleged ties to planned cyber attacks against the U.S. government.

However, these tensions have yet to materialize with Peru. In July 2011, Humala traveled to Washington as president-elect and met with both President Obama and Secretary of State Hillary Clinton to assure them that he would not become another Chávez. In January 2012, Washington donated $2.3 million in military hardware to the Peruvian government to fight terrorism and drug trafficking in Peru’s troublesome Apurimac and Ene River valley. The U.S. ambassador to Perú, Rose Likins, was present at the ceremony in which equipment like night vision goggles, sensors, and mine detectors were given to the Peruvian security forces. Leaving aside questions about the wisdom of a militarized drug war, the fact that Humala maintains military relations with Washington half a year into his presidency is in stark contrast to the rapid deterioration of U.S.-Venezuelan relations after Chávez came to power.

In general, the Obama administration has taken the correct diplomatic course when it comes to relations with Humala, and vice versa. Neither government has attempted to antagonize the other. Consequently, relations remain generally as good as they were with previous Peruvian governments. When it comes to U.S. interests in Latin America, Peru is probably on the second tier when it comes to importance, after countries like Colombia, Mexico, and Brazil (unsurprisingly, there was no mention of Peru or the Andes in Obama’s 2012 State of the Union address). Nonetheless, Lima has generally been a close Washington ally, even during the Fujimori dictatorship, and Washington should avoid diplomatically aggressive measures that might push Humala closer to Venezuela.

W. Alex SanchezW. Alejandro Sánchez is a contributor to Foreign Policy In Focus and a research fellow at the Council on Hemispheric Affairs where he focuses on international security and geopolitical issues. His personal blog can be found by clicking here.