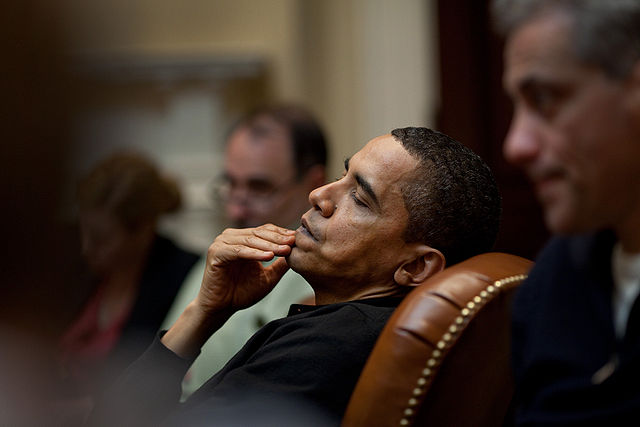 Humanitarian Intervention: The Gift That Keeps on Giving to U.S. Imperialism

It’s frightening how ready and willing President Obama is to operate outside of global legal frameworks.
By Ajamu Baraka | September 5, 2013

Cross-posted from the Black Agenda Report.

With the announcement by the Obama administration that it intends to launch an attack on Syria in response to the chemical attack alleged to have been carried out by the Syrian government, the U.S. Administration has again assumed for itself the role of global “gendarme,” policing, punishing, and as its drone warfare program demonstrates, even executing the natives of the global village at will. In its single-minded dedication to this global role, the Obama administration has also freed itself from the constraints of international law as the President shamelessly declared that he was “comfortable” operating outside of the global legal frameworks that the U.S. itself helped craft.

How is it that the administration can announce to the world its intentions to circumvent, and by doing so, subvert international prohibitions on war? By wrapping itself in the false flag of humanitarian concerns for the suffering masses in Syria. President Obama, the corporate and financial elite’s most effective propaganda weapon since Ronald Reagan, explains to the world that it is only the plight of people in Syria that drives the U.S. decision to attack the country.

No one asks the President to explain to the innocent human beings who are walking around today alive, but who will be the dead and maimed “collateral damage” of this pending attack, why their sacrifice is for the greater good of humanity.

This justification for this latest breech of international law is yet another example of the sham that is “humanitarian intervention.” If “mass killings of its own people” constitutes a “crime against humanity” and “mass” in Syria means over a thousand people killed, surely the killing of over a thousand in Egypt must also constitute a serious crime against humanity! But that kind of rational calculation could only occur if there were one ethical standard for all states and an equal value placed on human life.

The reality, however, is that there are two mutually exclusive moral standards: one for the vast majority of nations and another for those comprising the dying but dangerous collection of European colonial capitalist nations.

It is the naked pursuit of U.S. geo-political interests like the gas off the coast of Syria, oil and the desire to isolate Iran that drive policy and not some concern for the people in Syria. That is the context that shapes and informs U.S. foreign policies globally. In the current context of relative U.S. decline, international law related to non-economic functions and relationships – the Geneva accords and the law of war, human rights and the Charter of the United Nations are now constraints on the ability of the U.S. to pursue its interests. And with no domestic checks on executive power with the capitulation and collaboration of Congress (despite this “feint” toward democratic accountability represented in seeking congressional approval from Congress before attacking Syria), a corporate media that serves as cheerleaders for the administration and peace and anti-imperialist movements that are marginal and in political disarray, U.S. criminality is completely out of control with the result that the U.S. has become the quintessential Rogue State.

Why has it been so easy for the State to obfuscate its interests and to create a bipartisan coalition united in its support for the essentials of U.S. foreign policies, even while there may be disagreements on some of the tactical issues? This can be partially explained by the innovative discourses produced by Western propagandists during the last two decades, the most innovative being the concept of “humanitarian intervention” and its dubious corollary the “right to protect.”

Humanitarian intervention and the right to protect evoke the unacknowledged white supremacist assumption that the “international community” – read as the governments of the capitalist/colonialist West – has a duty and a right to arrest, bomb, invade, prosecute, sanction, murder and violate international law anywhere on the planet to “save” people based on its own determinations and values.

That is precisely why the question of what entitles the U.S. to inflict punishments on the Syrian government is not even raised as part of a public discussion. That question and its answer are obvious to the victims of Western colonial and imperialist brutality: The U.S. and its European allies have that right because they have always had the right over the last 500 years to universalize and impose their assumptions, world views and values.

The normalization of white supremacist domination and its prerogatives are so completely inculcated in U.S. and Western consciousness that not only is the question as to what right the U.S. and the West have to attack Syria outside the framework of consideration, but alternative ways of viewing the world are beyond cognitive comprehension. This is the cultural and ideological foundation of “American exceptionalism and the intellectual framework and assumptions that informed Western-based human rights organizations and their theoreticians in the construction of the notion of humanitarian intervention.

De-contextualized from the reality of globalized Euro-American domination, the idea that there is a collective responsibility on the part of states to protect people from gross and systemic human rights violations associated with war crimes, genocide, crimes against humanity, and ethnic cleansing could be viewed as a progressive development for international relations and global morality – even if that protection if offered selectively. But in the hands of an arrogant minority that still dominates the international system and sees its civilizational project as representing the apex of human development, the right to protect has become a convenient cover for rationalizing and justifying continued Euro-American global hegemony through the use of armed interventions to refashion local realities in line with Western geopolitical interests.

Power unchecked is power abused, and in the post-Cold-War world of U.S. military dominance, neither international law, morality nor international public opinion have proven to be sufficient checks on the rapacious designs of the U.S. Empire. It is only the construction of an alternative progressive/radical social bloc comprising broad sectors of the population that can stem the tide of momentum created by the merging of neoliberalism and militarism over the last decade. The imposition of militarism and the policies of austerity can be countered with the ideological “de-colonization” of human rights and the development of popular structures of “dual power.”

A new, people-centered human rights movement must be developed that rejects the fiction of non-political human rights and is not afraid to name white supremacist, capitalist/colonialist patriarchies as the interconnected enemies of global human dignity. A human rights movement that is anti-war, anti-imperialist, committed to systemic change and grounded in ethical standards that emanate from the experiences, knowledge and perspectives of peoples and not just governments.

This is the pressing task and responsibility of human rights activists facing the global contradictions of the 21st Century. If the human rights idea is not liberated from the narrow instrumentalism of the liberal apologists for empire and Western domination, it will have no value for the oppressed of the world and would have to be relegated to the trash heap of history along with the other relics of the “modernization” project.

Ajamu Baraka was the founding Director of the US Human Rights Network. Baraka is currently an Associate Fellow at the Institute for Policy Studies and is editing a new book on human rights in the U.S. entitled “The Struggle for a People-Centered Human Rights: Voices from the Field.” He can be reached at Ajamubaraka.com.