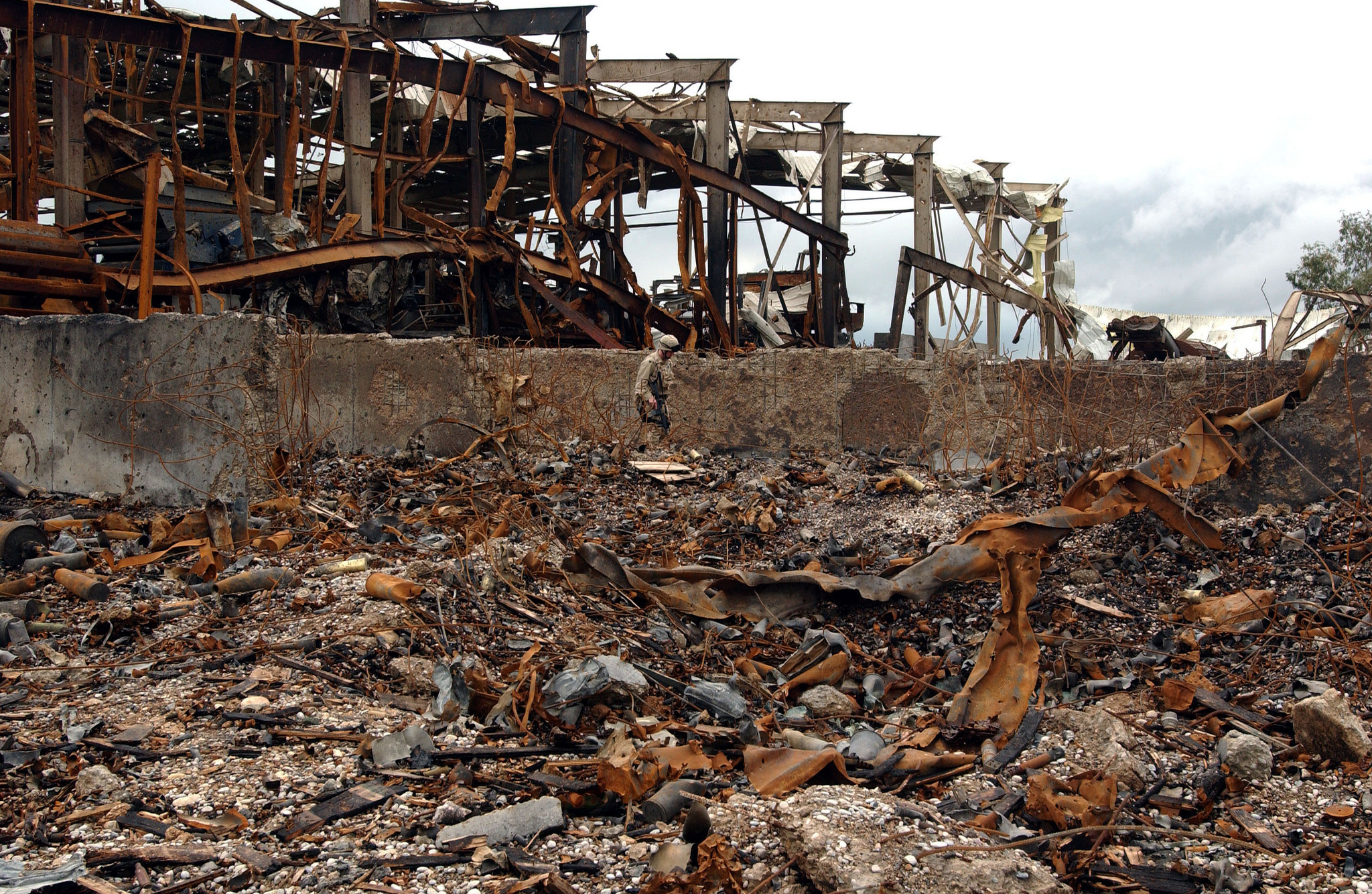 If Aleppo Was a Crime Against Humanity, Isn’t Mosul?

When U.S. rivals committed atrocities in Aleppo, Western talking heads were appalled. But when the U.S. supports them in Mosul? Silence.
By Evan W. Sandlin | March 24, 2017

The Islamic State, or ISIS, has occupied the city since June 2014. Now, with the help of U.S. airpower, the entire eastern portion of the city has been retaken, and roughly 33 percent of Mosul is in Iraqi government hands. ISIS is “completely surrounded,” according to Western-coalition officials.

Compare it to the feverish Western coverage of the siege of rebel-held Aleppo by Russian and Syrian government forces.

Just three months ago, on the eve of Aleppo’s fall to the Syrian regime, the New York Times declared that Syrian leader Bashar al-Assad, Russian president Vladimir Putin, and Iran were “Aleppo’s destroyers,” and decried the slaughter of civilians and intense shelling of residential neighborhoods. There was little discussion of the rebels, many of which had received U.S. funding or weapons at some point during the conflict — and almost all of which had engaged in severe violations of human rights of their own.

The Times assigned complete responsibility for the disaster to the Syrian government, which it said had “ignored the demands of peaceful protesters and unleashed a terrifying war.” That position unsurprisingly mimicked the U.S. government’s. (The U.S. ambassador to the UN, Samantha Power, even compared the fall of Aleppo to the Rwandan genocide and the massacre at Srebrenica.)

If stripped of the hyperbole, the Times was not wrong. The population of Aleppo had been subjected to a brutal siege carried out by the Syrian military and its allied militias. Barrel bombs had devastated the city for years, destroying primarily civilian infrastructure such as mosques, hospitals, and schools. Humanitarian access to the eastern half of the city was made difficult by regime checkpoints and attacks.

In February 2015, the Syrian government expelled the UN officials responsible for coordinating humanitarian access, while both Amnesty International and Human Rights Watch condemned the siege of Aleppo as a crime against humanity.

Meanwhile, in government-held areas of Aleppo, the Syrian regime operated as a police state usually does: by arresting and torturing dissenters. The report released by the UN Human Rights Council on March 1 makes it clear that that the Syrian regime is guilty of heinous crimes in Aleppo, including summary execution and the use of chemical weapons.

And while it is gross negligence for the Western press to completely ignore the crimes of U.S.-backed rebels, there is ample justification for focusing disproportionately on the crimes of the Syrian government and their Russian backers, who possess a disproportionate share of firepower and therefore possess the greatest potential to unleash devastation at a moment’s notice.

In Iraq, the fall of Mosul looks remarkably similar to the fall of Aleppo — but without the same sort of Western denunciation.

Torture and Murder in Mosul

The obvious distinction between the two battles is that eastern Aleppo was occupied by U.S. and Gulf-backed rebels, while the universally despised Islamic State occupies Mosul.

There is no moral equivalency between the two, but we would do well to remember that life in Aleppo under the rule of extremist groups such as Ahrar al-Sham, Jahabat al Nusra, and Nour al-Din al-Zenki wasn’t pleasant either. These groups engaged in and continue to engage in widespread human rights abuses, persecute religious minorities, and implement draconian laws.

Not all rebel groups in Aleppo were hardline reactionaries, and even if they were it would hardly excuse the Syrian and Russian siege and slaughter. Likewise, the occupation of Mosul by the Islamic State does not justify the wholesale destruction of parts of the city by U.S. airpower. Nor does it justify the abuses by the U.S.-backed Iraqi government and its allied militias.

The battle of Mosul began in earnest in mid-October 2016, with Kurdish and Shia militias tasked with taking back villages surrounding the city while Iraqi forces entered Mosul itself, all while the U.S.-led coalition provided support from the air.

A number of these Shia militias, including the Badr Brigades and the Hezbollah Brigades, had previously detained, tortured, and disappeared fleeing civilians during the sieges of Tikrit and Fallujah. The Iraqi government has a similar record of cruelty, to say nothing of the U.S. military — which had very recently twice turned Fallujah, the “city of mosques,” into a city of rubble.

As Iraqi forces and allied militias began to re-take Mosul’s suburbs, they began to abuse the civilians that came under their control.

To no one’s surprise, militia fighters carried out “revenge attacks” against suspected collaborators. But the abuses carried out by the Iraqi military are undoubtedly worse. Videos show Iraqi forces torturing young boys with hammers and running them over with tanks. The Iraqi military carried out summary executions of both captured Islamic State militants and civilians in villages surrounding Mosul. These violations continued well into the offensive. As recently as late January, images and videos of Iraqi forces torturing and executing captives were still being released.

Crimes from the Sky

As in any modern conflict, crimes committed by ground forces are particularly unsettling for their visibility and their plain inhumanity, but the worst crimes come from the sky. The Iraqi military and their allied militias are brutal indeed, but they are no match for the barbarism of U.S. airpower.

The toll of coalition airstrikes worsened dramatically once Iraqi and allied forces had retaken the surrounding villages and began to enter the densely populated city from the east. By early January, the Iraqi military had retaken eastern Mosul with “significant humanitarian cost to civilians,” the casualty-tracking site AirWars.org reports. U.S. airstrikes in Mosul increased 33 percent in January, it calculates, and “a record number of civilians were killed,” including whole families.

By late January, the UN counted 1,096 people killed during the offensive, half of them civilians. That toll has only continued to increase in recent days as the Iraqi military pushes west.

Just as in Aleppo, civilian buildings such as hospitals and mosques have been the targets of U.S. attacks. In one incident, Nineveh Media Center — Mosul’s main news outlet — was hit, killing an estimated 50 civilians. Activists claimed the center was targeted due to its publication of ISIS propaganda, which even so would be a disturbing and violent attack on press freedom. Elsewhere, U.S. Apache helicopters, along with Iraqi ground forces, shelled and pummeled buildings in the Dawasa neighborhood, killing 130 civilians.

White phosphorus, a chemical weapon capable of burning human flesh to the bone, has also been used by coalition forces in the city.

It is estimated that the coalition killed up to 370 Iraqi civilians, including scores of children, in the first week of March alone. In the words of one Mosul resident, “Now it feels like the coalition is killing more people” than ISIS.

The United Nations has routinely expressed “deep concern” that coalition airstrikes were targeting civilian infrastructure in Mosul. To compound matters, fuel, food, and water are quickly running out. The UN and other humanitarian organizations place the blame squarely on the U.S.-imposed three-month siege that cut all supply lines to the city. Essential food items are “virtually unattainable” for many of Mosul’s inhabitants, the New York Times reports.

Excuses for the slaughter abound, and they are both entirely familiar and unconvincing.

The standard response is that the Islamic State hasn’t allowed civilians to leave Mosul and instead uses them as “human shields.” This is likely true — but it was also true in rebel-held Aleppo, according to the UN Human Rights Council. This didn’t stop the editors of the New York Times from condemning Russian airstrikes that devastated the city.

In fact, bombing densely populated cities anywhere is guaranteed to kill civilians. The U.S. and its coalition partners know this. They simply don’t believe those civilians matter enough.

The State Department rejects any comparison to Aleppo, an Obama-era spokesman said, since “in Mosul you have an entire coalition of some 66 nations who have planned for months” with “the vast support and legitimacy of the international community.”

This statement is absurd. War crimes don’t get a pass when more nations participate in them.

And the use of the word “legitimacy,” which has precisely no legal meaning, is meant to distract from the fact that Russia’s intervention in Aleppo was also legal under international law — no less so than Washington’s in Iraq, since both countries have welcomed by the respective regimes they’re fighting to preserve. However, the legality of the intervention does not absolve one from the obligations imposed by international humanitarian law in the course of the intervention.

In the end, all attempts at differentiating the siege of Mosul from the siege of Aleppo reduce to the scoundrel’s last refuge: It’s acceptable when we do it. It’s no surprise that Western talking heads purport to care very much about a massacre committed by a rival power, which we can’t do much about in any case, while either ignoring or supporting a different massacre carried out by U.S. hands.

Furthermore, what’s happening in Mosul is in danger of being repeated. President Trump has already increased the frequency of drone bombings and U.S. raids — a sign that he harbors even less concern for civilian life than did President Obama. The U.S. recently announced it will deploy another 400 troops to Syria to assist in the battle for Raqqa, Syria.

Above all, there is little evidence that removing the Islamic State from Mosul by shelling and bombing dense civilian neighborhoods will result in lasting stability. Once the U.S. destroys a city, directly or indirectly, it summons the kind of chaos and resentment that guarantees it will soon need to intervene militarily once again to safeguard its newly constructed client.

What happens after Mosul? Look to Fallujah, where disdain for both the Iraqi government and the U.S. runs high in the aftermath of multiple coalition campaigns. What happens after Raqqa? Look to Damascus, where suicide bombing has increased after the rebel “defeat” in Aleppo.

Many Iraqis residing in Mosul will be glad to be free of the Islamic State, but many will also be mourning the loss of their family members. And if history is any guide, they will blame the U.S. occupier and its client government in Baghdad.

Foreign Policy In Focus contributor Evan W. Sandlin is a PhD Candidate and Instructor in the Department of Political Science at the University of California, Davis.