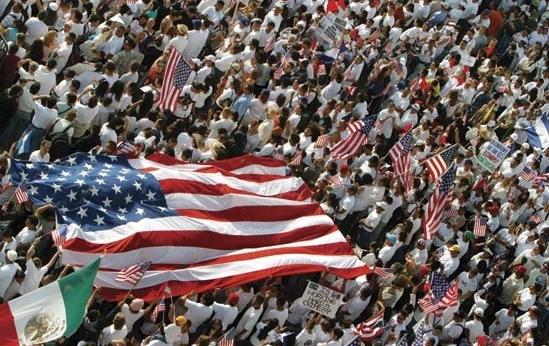 Immigration Reform in 2013 and Beyond

If public will and common sense are the driving forces of policy development, we should see meaningful action on immigration this year.
By Oscar Chacon, Amy Shannon | May 1, 2013 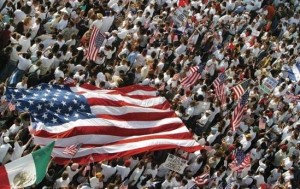 With a handful of legislators finally beginning to tackle the broken U.S. immigration system, immigration reform is back on the front page in the United States for the first time this decade. But it has never been off the radar for immigrant groups, who have witnessed first-hand the toll that indiscriminate deportation, indefinite detention, and ongoing discrimination have taken on our communities.

Senator Marco Rubio and his “Gang of Eight” may have captured the headlines in Washington, but immigrant-led organizations have systematically planted and nurtured the seeds of public pressure for immigration policy reform for the past decade. The growing clamor for reform reached a crescendo in the wake of the November elections, as pundits analyzed the growing power of Latin American voters and struggled to come to grips with changing demographic realities.

Today, as immigration activists rally in small and large groups around the country, rumblings from both the Senate and the House of Representatives make it clear that moving an immigration reform bill this session remains a tough challenge. Still, it is remarkable how diverse the voices demanding immigration policy reform have become. If public will and common sense are the driving forces of policy development, we should see meaningful action on immigration this year.

Sadly, there are other factors at work. As the debates unfold in the House and the Senate, we fear that many of the good and urgently needed elements of the package could lose ground to the unnecessary, wasteful, and downright harmful elements favored by some lawmakers. Worse yet, policymakers could argue and stall so long that they run out of time to move legislation forward. For the millions of people living in fear, as well as the more than 1,000 who are deported every day, failure to act could be the cruelest possible outcome.

The problems with current policy are numerous and complex. One serious challenge arises from the outdated quota system for immigration visas, which limits the number of visas available annually to citizens of any given country. In the case of Mexico and other Latin American countries, the limits fall far short of the demand from citizens and legal permanent residents seeking to reunite with family members. Political compromises made in the 1960s and 1970s subjected migration from Mexico and Central America to the same per-country annual limits as every other country, ignoring the historical regional ties between these countries and the United States.

As a result, people waiting to obtain an immigrant visa face inhumanely long backlogs—in some instances stretching more than two decades. Consequently, immigrants who consider family unity a priority confront a profound dilemma: follow the law and spend decades away from their families, or find a way to be together, even if it means breaking the law. No immigration policy should create such a quandary.

We also continue to live with the consequences of the exclusionary and punitive Illegal Immigration Reform and Immigrant Responsibility Act of 1996 (IIRIRA), This law essentially criminalized unauthorized immigration, moving previously administrative matters into the realm of criminal acts punishable by detention and deportation. Virtually all laws responsible for the deterioration in the rights of foreign-born nationals residing in the United States—as well as the increasing pattern of incarceration and an unprecedented number of deportations—find their legal basis in IIRIRA.

We should be vigilant about using the word “comprehensive” to describe a set of policy reforms that will be partial at best. The debate in Washington doesn’t even touch on the economic, social, political, and cultural factors that push so many people—particularly in Mexico, Central America, and the Caribbean nations—to attempt to reach the United States for a better life for themselves and their families.

Human migration is driven by intertwined factors that include armed conflicts, environmental degradation, economic supply and demand, and cultural integration. Trade agreements have opened up the flow of goods and capital across the region but have left enormous gaps in protecting human rights, access to medical care, labor standards, and the management of shared environmental risks, such as climate change and the over-exploitation of natural resources. A truly comprehensive approach to immigration would require aligning U.S. foreign policy, as well as international economic policy, with a visionary, humane, and functional immigration policy for the 21st century.

The current proposal being debated in the U.S. Senate takes positive steps toward addressing some of the most critical and urgent problems, but it completely ignores others and creates several new ones. The effort to clear the backlogs for family-based petitions for both U.S. citizens and legal permanent residents comes as a welcome signal to families who have been waiting for years or even decades. The proposed program to offer temporary status to those able to comply with a set of stringent requirements, and pay significant application filing fees and fines, would indeed provide relief for many people.

But the path to becoming a Legal Permanent Resident (LPR), which is a precondition for an immigrant to have the option to apply for U.S. citizenship via a naturalization petition, looks to be a long and complicated one. The Senate bill does propose a streamlined process for some young people and a few other groups to apply for LPR status, but the final product could fall far short of this high water mark as policymakers seek to appease anti-immigrant constituencies.

Consistent with this idea, any proposal that actually passes will likely include the elimination of certain family-based immigrant visas categories and significantly change and expand the current temporary worker visa system. One bright spot in this area is an agreement reached between the U.S. Chamber of Commerce and organized labor leaders led by the AFL-CIO. If upheld, that agreement will improve the rights of individuals who come to the United States under temporary worker visas in the future, offering workers the chance to self-petition after a few years for a LPR visa.

Another area where a new immigration law is likely to introduce changes is electronic verification of employment eligibility. The ultimate goal is to embrace a quasi-national I.D. system under the premise of denying unauthorized workers the ability to secure employment in the United States. For a nation not equipped with a federally operated population database, the implementation of an electronic employment verification system runs the risk of being implemented in a discriminatory manner, affecting primarily those who look or sound like foreigners. These are just a few issues to keep an eye on as debate over the legislation moves forward.

No Time to Wait

Since election night last November, we have begun to hear a new positive narrative about the importance of immigrant communities, and in particular voters of Latin American origin. This is a shift that everyone should affirm and celebrate.

However, rhetoric that paints immigrants, particularly those from Mexico, as a threat to the nation and a public charge appears firmly embedded in the legislative language of immigration reform proposals. This could well result in our wasting many billions of dollars in repressive and largely ineffective border security measures, as well as funneling more billions towards private prison companies running immigrant detentions centers.

Life has seldom been easy for the millions of immigrants residing in the United States without authorization, but they have seen conditions deteriorate further as a result of an obsessive push by the Obama administration to deport migrants and separate families. The situation is dire and urgent. The simple prospects of getting a chance to apply for a work permit and avoiding the immediate threat of detention and deportation represent a major improvement from their current condition.

For this reason alone, immigration reform must move forward in 2013. However, we should all be aware that even the best possible version of reform legislation will engender a new set of challenges that will require continued advocacy. Therefore, we reject the notion that any legislative reforms that may be enacted in 2013 will put to rest the issue of immigrant rights and immigration policy reform. Positive changes contained in a potential new immigration law will have to be affirmed and defended while we fight back against new policies derived from the old logic of immigrants as a threat.

In addition, we should continue to press for administrative changes that could ease the pain for immigrants right now, even as we wait for Congress to take action. By stopping the aggressive and widespread practices of immigration law enforcement, the Obama administration could send a strong signal of support to immigrant families and set a positive tone for progress on immigration reform. Today’s immigrants are and will continue to be vital for the well-being and progress of the United States of America. We must organize more effectively to ensure that our laws reflect this fundamental truth.

Oscar Chacon, Amy ShannonOscar Chacon is the Executive Director of the National Alliance of Latin American & Caribbean Communities (NALACC). An immigrant from El Salvador, Mr. Chacon is a frequent lecturer on Latino immigrant issues in the U.S. and the impacts of the Latino diaspora in Latin America. Amy Shannon is a Senior Advisor to NALACC and a strategic consultant working to foundations and non-profits working on sustainability and equity in Latin America.