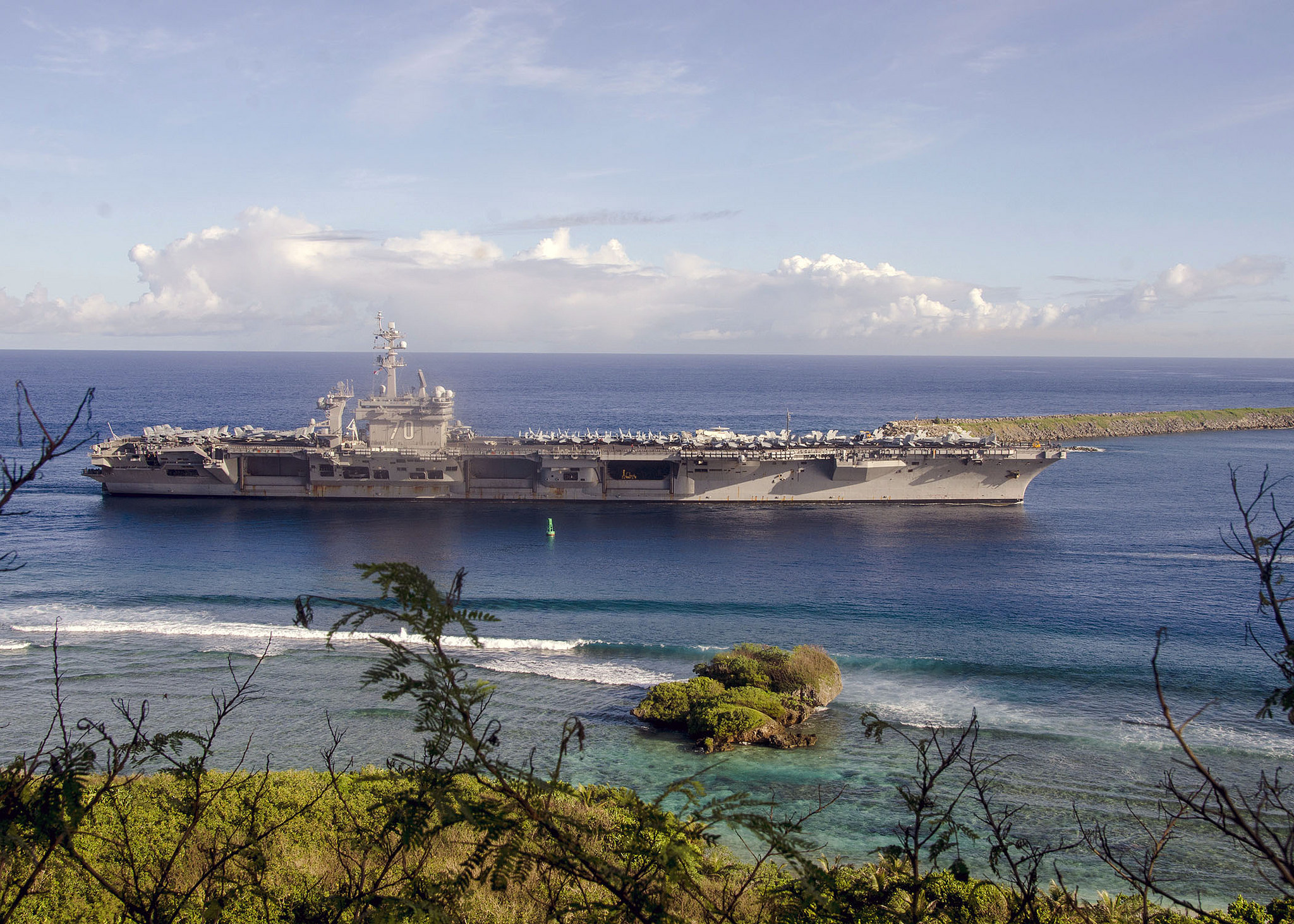 The United States is using this Pacific colony as its own private firing range.
By Leilani Ganser | August 3, 2017

This past Fourth of July, while I listened to the fireworks outside the Capitol building, my phone started buzzing with news alerts. North Korea, they said, had tested an intercontinental ballistic missile. Headlines emphasized that it could supposedly reach Alaska.

But much closer than Alaska is the tiny island of Guam — a U.S. colonial possession in the Pacific long exploited as a military base. My grandmother was born there, and much of my family remains. At just 30 miles long and 8 miles wide, Guam is often called “the unsinkable aircraft carrier,” as a third of the island is covered in military bases.

That’s long made it a strategic target for enemies of the United States. In fact, during the Cold War, it was said that the Soviets were the only ones who could point out Guam on a map. For as long as the West has been aware of Guam’s existence, it’s been a target.

During World War II, while my grandmother still lived there, the Japanese occupied Guam and terrorized the indigenous Chamoru population, rounding them up and herding them into concentration camps. In the Manenggon camp, 18,000 Chamorus were interned and surrounded by machine guns set up by the Japanese soldiers for a planned massacre.

Today, with the Japanese long gone and the Soviet Union dissolved, the island still faces a battery of live-fire military ammunition with no foreseeable end. But the immediate danger doesn’t come from North Korean missiles. It comes from the United States military, which freely uses the Pacific territory as its own private firing rage.

While tourist ads depict the South Pacific as a tranquil safe haven, that tranquility is pierced by the roars of B-52 bombers and submarine water-to-shore artillery blasts. For as long as the United States has maintained Guam as a colony, it has been a simulated warzone.

It’s not simply the military firing weapons that can make life difficult for locals, however. The issue is often the presence of the military itself.

With military bases come extreme pollution, the occupation of sacred lands, and what some scholars describe as an invisible public health crisis. While the primary argument for these bases is national security, there are countless examples of these bases damaging the health and security of the local population.

Over the years Guam has been home to nuclear weapons, mustard gas, and countless other carcinogens. In the 1980s, the Navy discharged radioactive water into a harbor my family has used for fishing. This increased exposure to radioactivity is linked to toxic goiters, a major contributor to thyroid issues which are now abundant in the local population. Multiple wells accessing the island’s one aquifer have had to be shut down due to chemical contamination from areas under or adjacent to these military bases.

Indigenous groups have largely led the fight against military pollution. The largely Chamoru-led We Are Guahån — Guahån is the indigenous name for the island — has worked for years to engage and mobilize the local community to prevent further military buildup. Their efforts are fundamental to the mission of a sustainable Guam.

In this, they’re drawing inspiration from activists on Puerto Rico — which, like Guam, is a U.S. imperial acquisition from the Spanish-American war whose strategic location has subjected it to exploitation from the U.S. military. There, residents of Vieques led protests in 1999 that ultimately resulted in the shutdown of the Navy’s base on the small island, which lies off the coast of Puerto Rico proper. Unfortunately, the lasting consequences of these bases, active or abandoned, are faced by locals daily.

Vieques was a live fire training site for the Navy for over 60 years and has since become one of the single sickest populations in the Caribbean. Along with skyrocketing rates of cancer, the people living on Vieques have a seven times higher risk of diabetes and eight times higher risk of cardiovascular disease than the rest of Puerto Rico.

The Navy has since admitted to the use of heavy metals and chemical agents on Vieques, including depleted uranium and Agent Orange, but denies any link between their use and the health of the residents. But Arturo Massol Deyá , a professor of microbiology and ecology at the University of Puerto Rico at Mayagüe — and the only independent scientist allowed to conduct research on Vieques — continues to find high concentrations of heavy metals in his samples of vegetation, crabs, lagoons, and other local food sources.

In both Guam and Puerto Rico, such pollution is devastating to the ecology of the local areas — and to any argument that the bases encourage economic growth for the impoverished local populations. In fact, they restrict the indigenous populations’ ability to engage in traditional means of subsistence and poison the resources locals rely on for self-sustainability.

In places like these, plans to expand U.S. military facilities — which could soon cover 40 percent of Guam, if plans initiated during the Obama administration go through — are a far greater threat than any missiles from Korea.

These bases of empire are an affront to self-determination and a reminder of our families caught in the crossfire of Western wars for “rights” and “freedom” that my grandmother and my family should have, too.

Leilani Ganser is an indigenous rights organizer and political science major at Reed College. She’s a Next Leader at the Institute for Policy Studies.