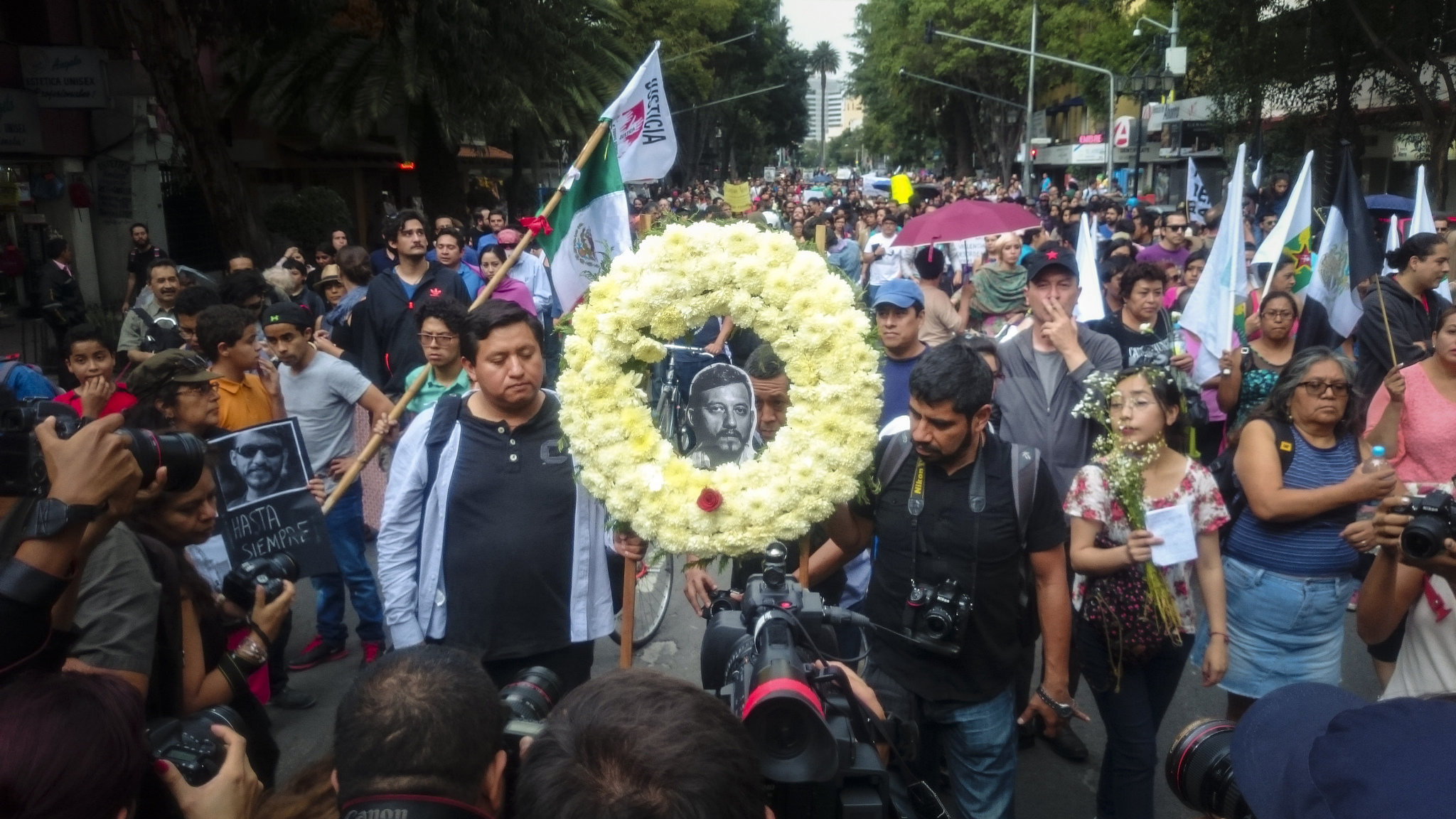 In Mexico, Hunted Down for Speaking Out

Once a refuge, Mexico City has become a hunting ground where journalists end up reporting on the assassinations of their colleagues — and wondering who will be next.
By Laura Carlsen | August 6, 2015

Earlier this summer, Ruben Espinosa fled Mexico’s Gulf coast state of Veracruz after receiving death threats. His work as a photojournalist there had made him an enemy of the state’s governor, who presides over one of the most dangerous places in the world to be a reporter.

On July 31, Espinosa was found beaten and shot dead in a Mexico City apartment.

Eight months ago, Nadia Vera, a student activist and cultural worker, looked boldly into a camera lens and told an interviewer that if anything happened to her, Veracruz governor Javier Duarte and his cabinet should be held responsible. She also fled Veracruz to the nation’s capital after suffering attacks.

On July 31, Nadia Vera was found sexually tortured and murdered, shot point-blank in the same apartment.

Three more women were assassinated in the normally tranquil, upper-middle class neighborhood that afternoon — an 18 year-old Mexican named Yesenia Quiroz, a Colombian identified only as “Nicole,” and a 40 year-old domestic worker named Alejandra. The press generally refers to the case as “the murder of Ruben Espinosa and four women,” relegating the women victims to anonymity even in death.

At a recent demonstration of journalists and human rights defenders, the sense of dread was palpable. As communicators in Mexico, we’re angry and intensely frustrated at how so many of our ranks have been killed, disappeared, displaced, or censored with no repercussions.

For many, including me, this crime especially hit home. For a long time, whenever I was asked if I was afraid to speak out critically in Mexico, I answered that fortunately Mexico City was relatively safe. Drug cartels and their allies in government only kept close tabs on reporters in more disputed areas.

The quintuple homicide in a quiet corner of the city shattered that myth — and with it what was left of our complacency. Several days before his murder, Espinosa told friends that a man had approached him to ask if he was the photographer who fled Veracruz. When he said yes, the man replied, “You should know that we’re here.”

Once considered a haven, Mexico City has become a hunting ground in a country where, too often, journalists end up reporting on the brutal assassinations of their colleagues — and wondering who will be next.

Ruben Espinosa had photographed social movements in the state of Veracruz for the past eight years, including journalists’ protests over the murder of Regina Martinez in 2012, a journalist and colleague of Espinosa at Proceso magazine. He covered the protests against the disappearance of the 43 students of Ayotzinapa by local police in Guerrero and acts of repression by the Veracruz state government.

Espinosa captured a front-page photo of Governor Duarte, big-bellied and wearing a police cap, which appeared on the cover of Proceso alongside the title: “Veracruz, a Lawless State.” Espinosa noted that the governor was so enraged by the photo he had his agents obtain and destroy as many copies of the magazine as they could get their hands on. He reported that while he was taking pictures of the eviction of protesters, a government agent told him, “You better stop taking pictures or you´ll end up like Regina.”

The Mexican Special Prosecutor’s Office for Crimes Against Freedom of Expression recognizes 102 journalists murdered from 2000 to 2014.

Yet the Mexico City prosecutor didn’t even mention the threats and attacks against Nadia Vera, an activist and a member of the student organization YoSoy132, as a line of investigation in her murder. The UN High Commission on Human Rights in Mexico stated that Vera and the other female victims found with Espinosa showed signs of sexual torture. Mexico City investigators announced that they were applying investigative protocols for possible femicides, but didn’t say why or confirm the reports of rape and sexual torture.

The invisibility of the women victims in the press and the official statements has been partially compensated for by social media. In social networks, millions of posts and tweets have brought to light the lives of the women, and especially Nadia’s more public and activist past, in an impromptu campaign that insists that women’s lives also matter.

Signs of a Cover-Up?

Now, just days into the investigation, with the nation — and especially journalists — reeling from the news, there are already signs of a cover-up.

On August 2, Mexico City Attorney General Rodolfo Rios gave a press conference reporting on advances in the case. Although Rios promised to pursue all lines of investigation, he downplayed the possibility that this could be a political crime against freedom of expression, claiming that Espinosa was not currently employed.

Rios also stated that the photojournalist came to Mexico City to look for work — a thinly veiled attempt to pre-empt the dead journalist’s own version of the facts that he was forced to leave Veracruz due to ongoing persecution. The city attorney’s office has put forth robbery as the principal motive of the crime, despite the execution-style torture and killings, and hasn’t called on anyone from the Veracruz government to provide testimony.

These are signs that the city government may be trying to railroad the investigation, and they’ve outraged the public, especially journalists. The attorney general’s absurd claim that Espinosa was unemployed at the time of his murder, seemingly suggesting that his journalistic work wasn’t a motive, caused particular indignation.

On August 5, investigators announced that they’d arrested and were questioning a suspect based on a match with a fingerprint found in the apartment. Despite apparent advances, there’s a growing fear that the government has no intention of really investigating a crime that could lead straight to a powerful member of the president’s own party.

The involvement of the Mexican government in the crime itself, or at least in creating the climate that led to the crime and failing to prevent it, raises serious questions for U.S. policymakers as well. The watchdog organization Article 19 reports that nearly half of the aggressions against journalists registered were carried out by state agents.

Since 2008, the U.S. government — through the Merida Initiative and other sources — has provided some $3 billion to the Mexican government for the war on drugs. This is a period when attacks on human rights defenders and journalists have skyrocketed, and more than 100,000 people have been killed by criminals and security forces alike.

A fraction of that money has gone to mechanisms for protection that have so far proved worthless. Rather than helping, this serves to support the false idea that the Mexican state is the good guy in a war on organized crime. The cases of corruption, complicity, and abuse that pile up week by week have demolished this premise.

Supporting abusive governments and security forces while claiming to support the journalists and human rights defenders being attacked by them is like pretending to help the fox while arming the hunter — it just prolongs the hunt. Mexican citizens who speak up are being hunted, too often by their own government. It’s time the U.S. government came to grips with that and immediately suspended the Merida Initiative.

Until there is accountability and justice — and an end to the murder of those who tell the truth about what’s happening here — sending U.S. taxpayer money to Mexican security forces is a vile betrayal of Mexicans’ friendship and of the highest principles of U.S. foreign policy.