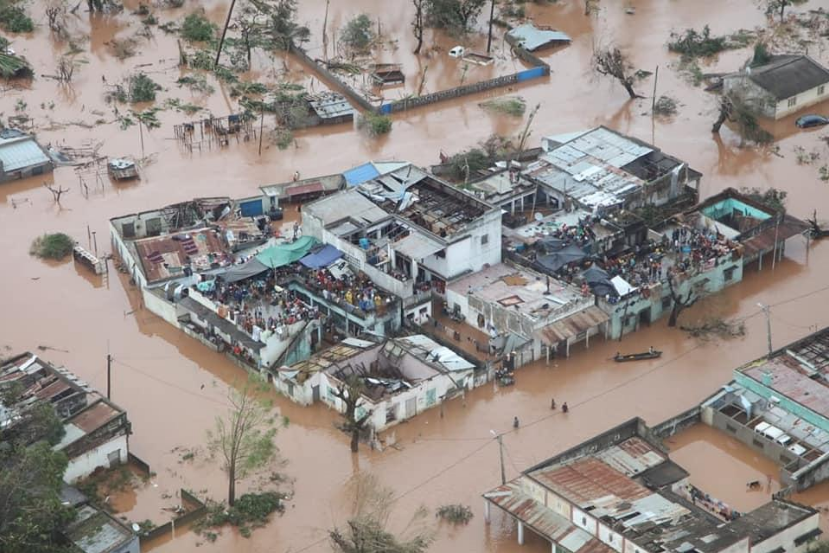 In the Wake of Cyclone Idai, the North Has a Climate Debt to Pay

Civil society groups are doing the hard work of recovery, but it's fossil fuel companies and rich countries that need to step up.
By William Minter | April 4, 2019

Weeks after Cyclone Idai struck the coast of Mozambique, near Beira, the flood waters have receded to reveal a shattered landscape.

Houses and roads were washed away; crops awaiting harvest were destroyed. Confirmed deaths number in the high hundreds across Mozambique, Zimbabwe, and Malawi, with the total still unknown. Emphasis has shifted from the rescue of survivors clinging to treetops and rooftops to provision of food, housing, and medical care for hundreds of thousands left homeless.

Even as local and international relief efforts gear up, there is a need to also focus on broader global implications. The causal connection between climate change and extreme weather events, such as Cyclone Idai, is clear. The need for climate actions in both poor and rich countries is beyond dispute. These include making the response to crises sustainable, increasing resilience to the effects of climate change through adaptation, and rapidly accelerating action to cut greenhouse emissions from fossil fuels.

Whose responsibility should this be? At the 1992 Earth Summit in Rio de Janeiro, the first global climate agreement affirmed that much of the burden should be shouldered by the wealthy countries:

The Parties should protect the climate system for the benefit of present and future generations of humankind, on the basis of equity and in accordance with their common but differentiated responsibilities and respective capabilities. Accordingly, the developed country Parties should take the lead in combating climate change and the adverse effects thereof.

Civil society and the diaspora step up

Civil society in Mozambique and Zimbabwe has played a major role in the immediate cyclone response. Rescues in flooded Buzi, for example, involved not only South African helicopters and Indian Navy teams, but also local canoes and a fishing boat, seen in this video from Al Jazeera. In the Mozambican capital Maputo, more than 5,000 volunteers coordinated collection of needed supplies, filling a container ship that arrived in Beira on March 26.

Meanwhile, there has been an unprecedented level of fundraising by diaspora Africans and others with personal ties to the affected countries.

As global media attention fades, disaster relief by the United Nations and international non-governmental organizations will probably decline. But diaspora and other personal connections, aided by social media, may be more lasting. (You can help by adding Cyclone Idai to a Google news search or Facebook search and sharing updates on social media.)

The outpouring of support is impressive, but a key test will be its sustainability. Beyond immediate disaster relief, sustainable global responses to climate change require greater and more predictable funding to strengthen the resilience of the most vulnerable regions.

There is no shortage of proposals for action, such as this guidance from the UN Environmental Program. But implementation will depend on political will in the countries that can afford to pay. This requires wide recognition of the “climate debt” owed by fossil fuel companies and rich countries whose emissions have contributed the most to destructive climate change.

Poorer people and countries, which have contributed the least to climate change, are also the most vulnerable to its effects. The price paid in lost lives and livelihoods falls disproportionately on them. This is seen not only in Cyclone Idai, but also in the recent flooding in the U.S. Midwest, where Native Americans on the Pine Ridge Reservation are finding recovery far more difficult than farmers in neighboring states.

Those who should pay more to prevent and mitigate climate change, and to cope with climate disasters, are still evading their responsibilities. In the words of Dipti Bhatnagar, coordinator of Friends of the Earth Mozambique, speaking on Democracy Now, “This is about the rich countries … We need to stop dirty energy, dirty and harmful energies everywhere. But this is about historical responsibility. So, that needs to happen in the Northern countries first, to stop fossil fuels, to stop dirty and harmful energies.”

Bhatnagar and other climate justice campaigners such as Decoalonize in Kenya also call for an end to projects such as Exxon’s natural gas project in northern Mozambique and new coal mines in Kenya, South Africa, and other countries. While national governments, in both North and South, remain slow to act, the range of action by civil society and subnational governments is expanding. Examples include the rising tide of lawsuits against fossil fuel companies and the March 15 climate strike in over 112 countries.

The Green New Deal in the United States, and similar efforts in other countries, must take on the powerful forces of the status quo. They must also be framed within a South-centered vision that highlights global climate justice, addresses inequality both within and between nations, and targets the strategic reallocation of wealth from the most privileged sectors to the common good.

This in turn will require structural changes, especially the identification and progressive taxation of corporate and individual wealth, much of which is hidden or exempt from taxation. In addition to saving lives in the present, South-North networks built in response to crises such as Cyclone Idai provide a foundation for demanding these critical changes.