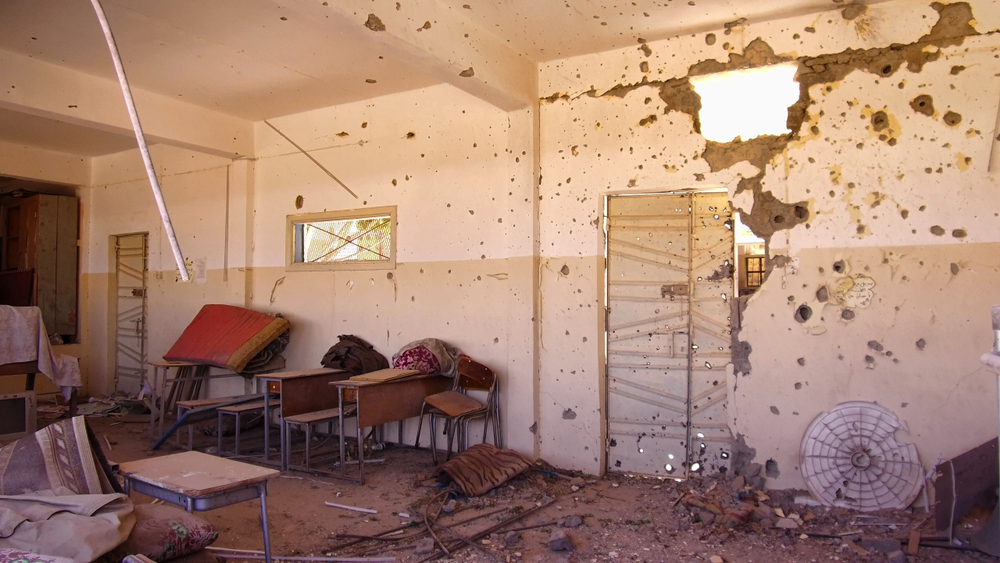 The ruins of a school in Taiz, Yemen. (Shutterstock)

In Yemen and Beyond, U.S. Arms Manufacturers Are Abetting Crimes against Humanity

The Saudi bombing of a school bus in Yemen on August 9, 2018 killed 44 children and wounded many more. The attack struck a nerve in the U.S., confronting the American public with the wanton brutality of the Saudi-led war on Yemen. When CNN revealed that the bomb used in the airstrike was made by U.S. weapons manufacturer Lockheed Martin, the horror of the atrocity hit even closer to home for many Americans.

But the killing and maiming of civilians with U.S.-made weapons in war zones around the world is an all too regular occurrence. U.S. forces are directly responsible for largely uncounted civilian casualties in all America’s wars, and the United States is also the world’s leading arms exporter.

Pope Francis has publicly blamed the “industry of death” for fueling a “piecemeal World War III.” The U.S. military-industrial complex wields precisely the “unwarranted influence” over U.S. foreign policy that President Eisenhower warned Americans against in his farewell address in 1961.

The U.S. wars on Afghanistan and Iraq and the “global war on terror” served as cover for a huge increase in U.S. military spending. Between 1998 and 2010, the U.S. spent $1.3 trillion on its wars, but even more, $1.8 trillion, to buy new warplanes, warships, and weapons, most of which were unrelated to the wars it was fighting.

Five U.S. companies — Raytheon, Northrop Grumman, Lockheed Martin, Boeing, and General Dynamics — dominate the global arms business, raking in $140 billion in weapons sales in 2017, and export sales make up a growing share of their business, about $35 billion in 2017.

In a new report for Code Pink and the Divest from the War Machine campaign, we have documented how Saudi Arabia, Israel, and Egypt have systematically used weapons produced by these five U.S. companies to massacre civilians, destroy civilian infrastructure, and commit other war crimes. The bombing of the school bus was only the latest in a consistent pattern of Saudi massacres and air strikes on civilian targets, from hospitals to marketplaces, and U.S. arms sales to Israel and Egypt follow a similar pattern.

U.S. laws require the suspension of arms sales to countries that use them in such illegal ways, but the U.S. State Department has an appalling record on enforcing these laws. Under the influence of Acting Assistant Secretary of State Charles Faulkner, a former lobbyist for Raytheon, Secretary Pompeo falsely certified to Congress that Saudi Arabia and the UAE are complying with U.S. law in their use of American weapons.

The U.S. sells weapons to Saudi Arabia and other allies to project U.S. military power by proxy without the U.S. military casualties, domestic political backlash, and international resistance that result from direct uses of U.S. military force, while U.S. military-industrial interests are well-served by ever-growing arms sales to allied governments.

These policies are driven by the very combination of military-industrial interests that Eisenhower warned Americans against, now represented by Secretary Pompeo, Acting Assistant Secretary Faulkner, and a cabal of hawkish Democrats who consistently vote with Republicans on war and peace issues. They ensure that the “war party” always wins its battles in Congress no matter how catastrophically its policies fail in the real world.

Republicans derided President Obama’s doctrine of covert and proxy war as “leading from behind.” But the Trump administration has doubled down on Obama’s failed strategy, surrendering even more power over U.S. policy to foreign clients like Saudi Arabia, Israel, and Egypt, and to the “unwarranted influence” of the U.S. military-industrial complex.

Lockheed Martin is earning $29.1 billion in sales from the $110 billion Saudi arms package announced in May 2017, a deal struck as the war on Yemen was already killing thousands of civilians. Yet no conflict of interest is too glaring for Lockheed executives like Ronald Perrilloux Jr., who has taken part in public events to promote the war and defend Saudi Arabia and its allies, arguing that the U.S. should “help them finish the job” in Yemen.

Not to be outdone, Boeing, the second largest arms producer in the U.S. and the world after Lockheed Martin, has also been linked to the deaths of hundreds of civilians in Yemen. Fragments of Boeing JDAM bombs were found in the debris of a 2016 attack on a marketplace near the Yemeni capital of Sana’a that killed 107 civilians, including 25 children. Human Rights Watch found that the airstrike caused predictably indiscriminate and disproportionate civilian deaths, in violation of the laws of war, and called for a suspension of arms sales to Saudi Arabia.

To profit from wars on some of the poorest, most vulnerable people in the world, from Yemen to Gaza to Afghanistan, Raytheon, Northrop Grumman, Lockheed Martin, Boeing, and General Dynamics have developed a business model that feeds on war, terrorism, chaos, political instability, human rights violations, disregard for international law, and the triumph of militarism over diplomacy. Real diplomacy to bring peace and disarmament to our war-torn world poses the most serious “threat” to their profits.

But the American people have never voted to funnel the largest share of our taxes into endless war and ever-growing profits for the “industry of death.” It is time for the sleeping giant, what President Eisenhower called “an alert and knowledgeable citizenry,” to wake from its slumber, take responsibility for our country’s foreign policies and act decisively for peace.

Medea Benjamin, co-founder of CODEPINK: Women for Peace, is the author of the new book, Inside Iran: The Real History and Politics of the Islamic Republic of Iran. Her previous books include: Kingdom of the Unjust: Behind the U.S.-Saudi Connection and Drone Warfare: Killing by Remote Control. Follow her on Twitter: @medeabenjamin

Nicolas J. S. Davies is the author of Blood On Our Hands: the American Invasion and Destruction of Iraq. He also wrote the chapters on “Obama at War” in Grading the 44th President: a Report Card on Barack Obama’s First Term as a Progressive Leader.