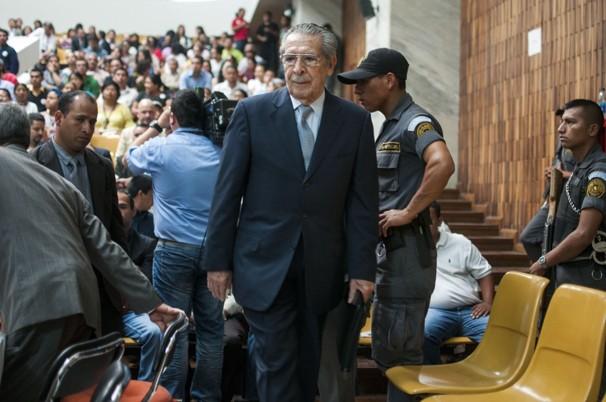 In Guatemala, A Mass Grave for the Truth

In a week of remarkable events and reversals in Guatemala, the genocide trial of former dictator Efrain Rios Montt came to an abrupt halt on April 18.
By Patricia Davis | April 23, 2013 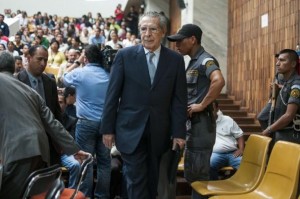 In a week of remarkable events and reversals in Guatemala, the genocide trial of former dictator Efraín Ríos Montt came to an abrupt halt on April 18 as a judge ruled all proceedings to date invalid. The witnesses who testified for the prosecution—dozens of survivors of mass rape and massacres—would have to testify again if the trial were to proceed.

“The ruling constitutes a mockery of justice and of the victims,” tweeted Claudia Samayoa, head of the Unity for the Protection of Human Rights Defenders. Addressing Otto Pérez Molina, Guatemala’s current president who had himself been an Army major in the region of the massacres under Ríos Montt’s rule, she continued: “Mr. President, respect once and for all the courts and accept that, yes, there was genocide and you were a part of it.”

Public Prosecutor Claudia Paz y Paz has appealed the ruling to Guatemala’s Constitutional Court, which must decide whether it was legal.

Protesters are calling for the resumption of the trial. They take these actions in a dangerous climate: death squads are again operating in Guatemala, eliminating indigenous leaders, union leaders, women’s rights activists, and others challenging the status quo and asserting their rights. In the last eight weeks, six indigenous community leaders have been killed. Five others were abducted and held for a time. Three of those abducted were tortured.

Echoes of Nightmares Past

These events bear a striking resemblance to the past.

In the Guatemalan daily Prensa Libre, columnist Kajkok Maximo Baj Tiul writes that Guatemala is “heading toward living again under state terrorism.” The terrorism, in his opinion, is aimed at “smoothing the way for the entry of multinational companies into indigenous territories,” where companies are establishing gold mines, hydroelectric dams, sugar cane and palm oil plantations, and other large-scale projects.

Lolita Chavez, a Quiché indigenous leader, put it this way during a recent indigenous assembly: “The massacre that there was in the war that lasted more than 36 years, we are living it anew.”

At the end of February, Tomas Quej, a Kekchi indigenous leader, was abducted and shot in the head. Union leader Carlos Antonio Hernández Mendoza, an outspoken proponent of the right of indigenous peoples to be consulted regarding large-scale development projects on their land, was shot on March 8. Three days later, Jerónimo Sol Ajcot, a member of the board of directors of the Maya Tzutujil Agricultural Workers and of the National Indigenous and Campesino Coordinating Committee, was stopped by six hooded and heavily armed men as he was going to work in the fields. The men opened fire, leaving the 68-year-old community leader dead.

On March 17, Exaltación Marcos Ucelo, a member of the Xinca Parliament, participated as an observer in a consultation about a proposed gold and silver mine. Those at the consultation voted overwhelmingly against the mine. As he drove home with three indigenous Xinca companions, twelve heavily armed men stopped and abducted the leaders. Two escaped with injuries. One was released. Marcos Ucelo was found dead. The mining company, Tahoe Resources, had previously threatened the leaders. Local and national authorities, told of the threats, took no action.

On April 16, the body of Qanjob’al activist Daniel Pedro Mateo was found in Santa Eulalia, Huehuetenango. He had been abducted twelve days earlier, while on his way to host a workshop on indigenous rights in Santa Cruz Barillas. He was an outspoken organizer against the hydroelectric dam in that community. Wounds on his body indicated that he had been tortured.

Guatemalan human rights analyst and blogger Miguel Angel Sandoval, who signed a number of the peace accords in the mid-1990s on behalf of the insurgency, has noted that the murders follow the modus operandi of government death squads of the past.

The United Nations Office for Human Rights in Guatemala has urged the government to take emergency measures to ensure activists’ safety. “It is unacceptable to revert to such criminal practices in order to thwart and obstruct the free exercise of human rights, including labor rights and freedom of expression,” admonished United Nations High Commissioner on Human Rights representative Alberto Brunori. The Guatemalan government has not adopted such measures.

Rob Mercatante, a staff member with the Guatemala Human Rights Commission/USA who has worked in Guatemala since the 1980s, points out that rather than prosecuting the attackers, the government is using the legal system against human rights defenders themselves.

“We now have campesino [peasant] leaders, school teachers, anti-mining activists, and others being thrown in jail for defending their rights, and arrest warrants that hinder the ability of activists to carry out their work,” he commented in an e-mail exchange. As far as the death squads, he notes, “There is no real need to assign police agents or soldiers to carry out the dirty work when gang members or hired gunmen can do the job. The twist is that these agents of violence can be contracted by either the state or the businesses themselves.”

“For me,” he continued, “this scenario is even more troublesome than the death squads of the past. The State can now distance itself from the more gruesome acts of terror and violence, while trying to break resistance movements under the guise of the rule of law—charging leaders with ‘acts of terrorism,’ for example.”

Pérez Molina has set as a priority the restoration of U.S. military aid, cut off decades ago in response to rights violations. This goal was already compromised when the army opened fire on unarmed protesters last October in Totonicapán, killing seven. And, while the prosecution of crimes of the past is a requirement for renewed U.S. military aid, Ríos Montt’s trial has presented unexpected hazards for the president. On April 4, a former soldier testified that the atrocities in his area were ordered by current president Pérez Molina, then an army major.

In spite of needing a public relations victory after that moment in the trial, Pérez Molina has edged no closer to protecting activists. His government has signaled instead that murder will be rewarded, granting a mining license in early April to the company suspected of involvement in the abduction of the Xinca leaders and the death of Marcos Ucelo. Shortly after the license was announced, three bullets tore into the office of the Center for Legal, Environmental, and Social Action. Director Yuri Melini was inside.

Melini has given photographs to the Vice Minister of the Interior in which, as he stated at a press conference, “the mine’s private security forces . . . are carrying out illegal actions against the civilian population, jointly with members of the National Civilian Police.”

On April 11, protesters who had set up camp on private property by the mine site were violently evicted by National Civil Police. At least 26 were arrested, without a warrant or clear cause. Police reportedly beat and injured a number of those arrested.

Pérez Molina has attempted to do some damage control. After being pointed out in court as having ordered the atrocities, he traveled to the town of Nebaj, in the Ixil, where massacres of notorious brutality were carried out. The mayor of the municipality took the stage and spoke first, telling the president that residents of Nebaj needed to benefit from the natural resources of the mountains, which their grandparents had protected for them and which they wanted to protect and pass on to their grandchildren. He asked that work on hydroelectric projects in the area be suspended. Pérez Molina, speaking next, acknowledged the high level of chronic malnutrition in Nebaj. He had brought “solidarity bags” of beans and incaparina, a high-protein food. His people had also brought large banners, which those traveling with him hung on the church: “In Nebaj There Was No Genocide”; “Ixil People Recognize Pérez Molina as Favorite Son.”

Two of the residents holding signs demanding justice for genocide—one of whom was an elderly woman, herself a massacre survivor—were attacked by the president’s security agents, who tore the signs. At a press conference, members of the municipal mayoral council said, “It’s offensive. They want to put up signs as they wish but don’t want us to express ourselves. … What he came here to do was clean his image. We do not need solidarity bags. What we need and demand…is justice for genocide, applying justice to all involved, starting with Ríos Montt and going to the current president, Otto Pérez Molina, and all his followers.” She added, “It is a mockery that he would come here and in exchange for beans and incaparina ask us to forget our murdered, our massacred.”

Not entirely surprisingly, a few days later the local Nebaj office of UDEFEGUA was broken into and ransacked.

In light of these events, it is becoming clear that a mini version of Guatemala’s war is being fought with little notice. It involves a struggle over land and rights, complete with death squad activity. Meanwhile, as in the past, impunity reigns. Those who testified against the country’s former dictator have been swept aside, along with their right to justice, and another mass grave has been dug by Guatemala’s powerful, this time for the truth.

Patricia Davis is former director of the Guatemala Human Rights Commission/USA and co-author, with Dianna Ortiz, of The Blindfold’s Eyes: My Journey from Torture to Truth.