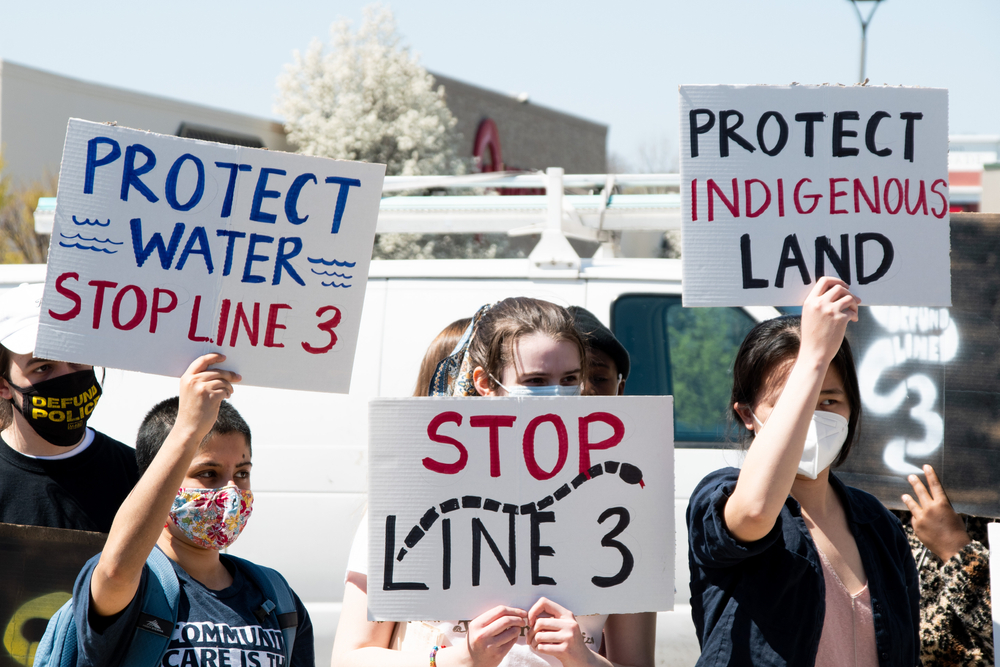 Indigenous Movements Are Key to the Fight Against Fossil Fuels

The Biden administration and other governments may make climate pledges. But often it’s indigenous-led movements who will see that they’re kept.
By William Minter | October 13, 2021

Oil is now flowing through the Line 3 tar sands oil pipeline from Edmonton, Alberta to Superior, Wisconsin. The 1,097-mile-long pipeline, owned by the Canadian company Enbridge, includes 337 miles in northern Minnesota. It has faced strong resistance for years from indigenous people and other environmental activists known as “water protectors.”

Ironically the tap was opened on October 1, only days before Indigenous Peoples Day on October 11 and weeks before the global climate summit in Glasgow begins on October 31. Ignoring demands from climate activists, the Biden administration refused to cancel the permit. This reflected a pattern in which administration officials seem to be stuck in a pattern of dithering instead of following up climate action pledges with actions.

Public opinion in Minnesota was bitterly divided. Although Democratic voters opposed the project by a 64 to 21 percent margin, Minnesota Democratic Governor Tim Walz and Senators Amy Klobuchar and Tina Smith have refused to oppose Line 3 — or even to criticize the collaboration between law enforcement and Enbridge in the violent suppression of protests.

Criminal cases against as many as 900 Line 3 protesters are clogging court systems in Northern Minnesota. And in early October the news emerged that Enbridge has paid $2.4 million to local police forces for pipeline protection, through a state-approved escrow account.

It might seem that protesters have lost this fight against the fossil fuel establishment.

Not so, argued Winona LaDuke, leader of the Indigenous-led environmental justice nonprofit Honor the Earth, in the Minneapolis Star-Tribune.

“In one narrative, the Canadian corporation won. Columbus conquered anew, proof that might and money remain the rulers.

Then, there’s another. That’s the Ballad of the Water Protectors — a movement born in the battles in northern Minnesota and North Dakota, a movement that will grow and transform the economy of the future . . .

The Canadian oil industry estimated that a lack of pipeline capacity reduced the industry’s income by tens of billions of dollars before the pandemic started… Uncertainty about Line 3 caused by Indigenous people and water protectors encouraged massive divestment from the tar sands by non-Canadian investors.”

It seems likely that President Biden will arrive in Glasgow with a briefcase full of promises but few credible actions. Legislative action depends on collaboration from holdout Democratic members of Congress, like Senator Joe Manchin (D-WV), who are in thrall to the fossil fuel industry.

Executive action is possible but unlikely, with the administration seemingly paralyzed by indecision and resistance from vested interests. And the effects of new petitions from climate groups and demonstrations by climate activists are uncertain.

The measure of progress on fossil fuels, however, as Donna Katzin stressed in Foreign Policy In Focus recently and in an earlier longer essay for the U.S.-Africa Bridge Building Project in May, will be how resources are actually dis-invested from fossil fuels and re-invested in renewable energy.

One factor affecting that outcome that is most often underestimated is direct action led by indigenous people, such as the resistance to Line 3 in Minnesota.

As Winona LaDuke noted, activists succeeded in delaying the Line 3 pipeline by four years. In August this year the Indigenous Environmental Network and Oil Change International released a report on Indigenous Resistance Against Carbon, with detailed calculations estimating that victories against these projects in the U.S. and Canada represent the carbon equivalent of 12 percent of annual U.S. and Canadian pollution, or 779 million metric tons of CO2.

Official commitments by governments adopted in Glasgow are clearly also important, if and when they are implemented. So are campaigns of all kinds to influence the companies themselves to switch from fossil fuels to renewable energy. So is the mobilization of youth around the world who are increasingly conscious of the imminent threats to their own survival.

But the decisive factor may well be direct action by indigenous peoples and others most directly threatened, both in their material impact as well as their catalytic effect on wider activist movements.

William Minter is the editor of AfricaFocus Bulletin.