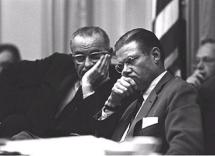 “The Act of Killing” sheds light on Indonesian mass killings that were even more uncalled for than most atrocities.
By Russ Wellen | July 25, 2013

In a lengthy piece for Slate, Errol Morris, the author and filmmaker, writes about a controversial new movie for which he served as an executive producer. Directed by Josh Oppenheimer, The Act of Killing is an examination of an atrocity, in this case, the 500,000 to a million killed in Indonesia in the mid-sixties. Conducted with the aid of Western governments, especially the United States, it was yet another heavy-handed attempt to staunch the spread of communism.

Rather than write about the film’s innovative approach, for which the director is being hailed, we’ll focus on a point Morris brought up in his article. He writes:

I had picked up Economists with Guns: Authoritarian Development and U.S.-Indonesian Relations, 1960–1968, a book by Bradley Simpson, professor of history at Princeton [who wrote]

“The annihilation of the largest non-bloc Communist party in the world vividly undermined the rationale for the escalating U.S. war in Vietnam, as former defense secretary Robert McNamara has noted, eliminating at a stroke the chief threat to the Westward orientation of the most strategically and economically important country in Southeast Asia  …  .”

Morris then quotes from Robert McNamara’s memoir, In Retrospect (bearing in mind that Morris won an Oscar for The Fog of War, his film profiling McNamara).

“George F. Kennan, whose containment strategy was a significant factor in our commitment to South Vietnam’s defense, argued at a Senate hearing on February 10, 1966, that the Chinese had ‘suffered an enormous reverse in Indonesia … one of great significance, and one that does rather confine any realistic hopes they may have for the expansion of their authority.’ This event had greatly reduced America’s stakes in Vietnam. He asserted that fewer dominoes now existed, and they seemed much less likely to fall.”

… the message was clear. Kennan was saying that the Vietnam War was unnecessary—the invasion of the South and the bombing of the North; the deaths of 58,000 American servicemen and more than 1 million Vietnamese were unnecessary. Not to mention the “collateral damage” to Cambodia and Laos.

… had recently published a memoir, On the Front Lines of the Cold War. There was a series of chapters on the 1965 coup and the killings that followed. … Johnson didn’t see the Indonesian killings as obviating the need for escalation in Vietnam. Quite the contrary. He saw his aggressive posture on Vietnam as a good thing because it made the killings in Indonesia possible. It was part of the war against Asian communism.

Bear in mind that the time frames of the Indonesian atrocities and the escalation of the Vietnam War were more or less contemporaneous. Morris again.

Cullen Murphy, the former editor of the Atlantic and now an editor at Vanity Fair, wrote to me about these issues.

What to George Kennan was a chance to avoid escalating in Vietnam was, to the Johnson administration, a chance to pile on.

The term “Cold War” glosses over the era’s hostilities, often fomented by the United States against indigenous peoples broadly tarred with the brush of communism. If actual, or “hot,” war is hostilities at a full boil, what we call the Cold War, with as many deaths as a major war, might better be characterized as the Simmering War.