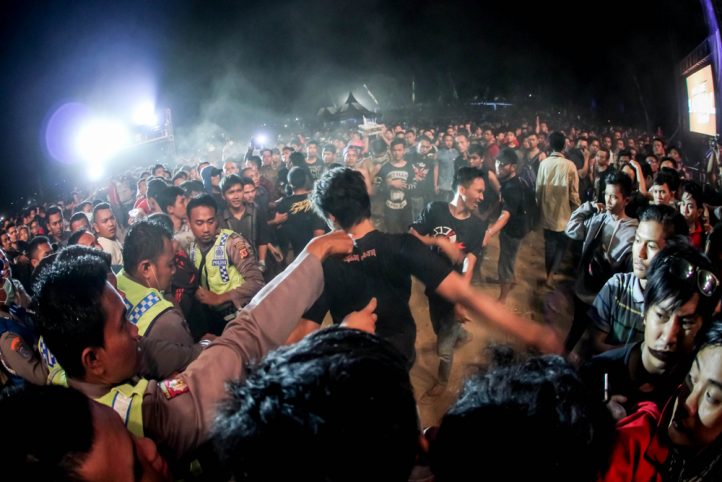 In early January 2016, journalists in the Indonesian city of Yogyakarta chatted about a doctor who had left her husband, moving to Kalimantan Island and joining a back-to-the-land movement called Gafatar.

Journalists working for various Indonesian media outlets reported that her husband had filed a “missing person” report with the Yogyakarta police, saying she’d been “abducted.” They darkly portrayed Gafatar as having “deviant teachings” against Islam, suggesting the movement tricked her into joining. Some journalists even looked for other “disappearance” cases.

These journalists predictably helped to generate public hysteria around Gafatar.

On January 15, 2016, mobs armed with sticks, clubs, and machetes threatened Gafatar farming communities with violence if they did not leave Kalimantan. Government officials and police officers visited their communities to pressure them to comply. Three days later, Malay militias attacked the Gafatar farms. A cell phone video shows police officers and military personnel standing by as a mob damages property and burns down eight communal houses.

Those violent mobs and government officials finally evicted 2,422 families — 7,916 people, including many children — between January and mid-February. At the peak of the crackdown, Indonesian authorities were detaining more than 6,000 Gafatar members who’d been forcibly evicted from Kalimantan.

On February 3, the Indonesian Ulama Council (MUI), a powerful Muslim body, issued a fatwa against Gafatar, declaring it a heretical organization. It wasn’t long before the police began to arrest Gafatar leaders.

A Decline in Journalism — and Democracy

On occasion, journalists have borne witness to large-scale sectarian and communal violence in which a total of about 90,000 people have been killed, ranging from sectarian violence in the Moluccas islands to the turmoil in East Timor after the United Nations-organized referendum.

But there are moments when journalists are confronted by a sensitive subject, like the Gafatar back-to-the-land movement, that test their notion of professionalism.

In May 2016, a Jakarta court sentenced a former Jakarta governor, Basuki “Ahok” Purnama, a Christian, to two years in prison for blasphemy against Islam. More than 150 people have been sent to prison for blasphemy in post-Suharto Indonesia, a huge increase from only 10 cases previously. The 1965 blasphemy law punishes deviations from the central tenets of Indonesia’s six officially recognised religions — Islam, Protestantism, Catholicism, Hinduism, Buddhism, and Confucianism — with up to five years in prison.

The rise of conservative Islamism poses an increasingly significant challenge for journalists in the world’s largest predominantly Muslim country. Harassment, discrimination, and violence directed at religious minorities are facilitated by a legal architecture, established in 2006, that purports to maintain “religious harmony.” In practice, it undermines religious freedom. And some Indonesian journalists find it difficult to separate their religion and their profession.

“Fundamentalism grows in silence, but it can grow quickly in many sectors, including journalism,” said the Muslim scholar Rumadi Ahmad.

The trend has also proved problematic for women’s rights. Since 2007, the National Commission on Violence against Women has listed more than 420 local regulations that discriminate against women. And that’s similarly reflected in the country’s media landscape.

Another problem is the dwindling popularity of traditional media due to the arrival of the internet: Google, Facebook, Twitter, Instagram, WhatsApp, etc. These companies have changed how Indonesians follow the news. Indonesian consumers are still learning the difference between reporting from a credible source and propaganda from an interested party, and how solid journalism is really made.

Journalists are no longer gatekeepers who decide what the public should and should not know. The individual is now his or her own circulation manager and editor. Indonesia’s Press Council calculated that Indonesia has now 47,000 media organizations.

The growth of “fake news” has created social, economic, and political problems. “Media consultants” are always available to serve their clients — and these days, that might even involve creating fake accounts and spreading propaganda.

Internet companies, especially Google and Facebook, have also redirected advertising away from traditional media, depleting the limited budgets of mainstream media and pressing their reporters to survive with smaller salaries. Taking bribes, a practice since the Suharto era, remains common among Indonesian journalists.

These are all powerful ingredients contributing to a serious decline of quality journalism, and thus democracy, in Indonesia.

In December 2003, journalism guru Bill Kovach visited five cities on Sumatra, Java, and Bali islands, launching the Indonesian translation of The Elements of Journalism, which he co-wrote with Tom Rosenstiel.

Kovach and Rosenstiel identified the 10 essential principles and practices of journalism:

Kovach was often told that those 10 principles are extremely difficult to implement. He acknowledged the difficulties, stressing that those principles are like “stars in the sky… to help sailors navigating.” Kovach and Rosenstiel wrote that what journalists should pursue is “journalistic truth” to help people and society to operate on a day-to-day basis — obviously not “Islamic truth” or other religious interpretations.

What Indonesian journalists should use as their guiding reference is the Indonesian legal system — most importantly the 1945 Constitution, which explicitly guarantees religious freedom and the rights of assembly, association, and expression of opinion.

Sadly, it also gives too much space for lower jurisdictions to abridge those rights. Now there are hundreds, if not thousands, of problematic laws, regulations, and local ordinances — including those 420 ordinances — made in the name of Islamic sharia, ranging from discriminating against non-Muslim minorities to making mandatory hijab rules.

Indonesia has also ratified eight core international conventions on human rights. These provide even stronger standards that Indonesian journalists should follow in pursuing the functional truth in their reporting.

A soul-searching review of where Indonesian journalists have failed in reporting on religious intolerance leads us back to equipping journalists with better training on the 1945 Constitution and many human rights conventions. Such training would hopefully avoid the problems of journalists stirring up religious tensions as they did against Gafatar members.

Andreas Harsono is a senior Asia researcher at Human Rights Watch, based in Jakarta.