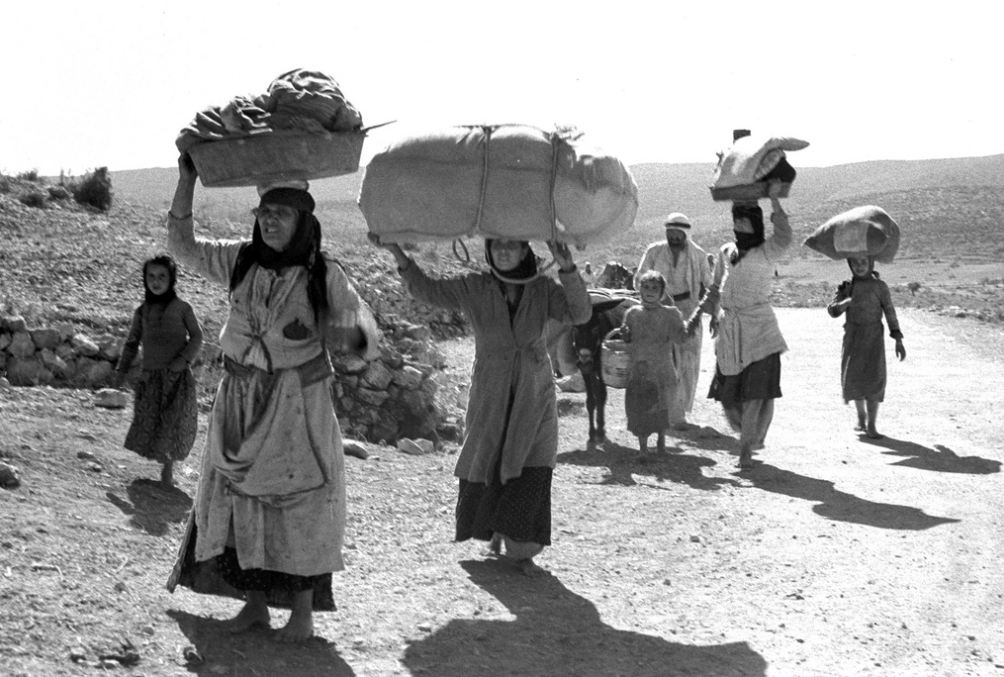 Arab refugees flee the fighting during Israel's War of Independence, or the "nakba." Now, with the peace process stalled and Israeli politics dominated by right-wing Zionists, some Israelis are looking inward for answers about history and the way forward. (Photo: Government Press Office / Flickr)

Introspective in Israel: On Zionism’s Legacy and Its Future

New books by Ari Shavit and Ilan Pappe offer competing but valuable reexaminations of Israel's history and the future of peace in the Middle East.
By Adam Cohen | March 31, 2014

The Israeli government presents a unified face to the world. But Israeli society contains a kaleidoscope of perspectives: on Israelis, on the Palestinians and other regional neighbors, and on Israel’s role in the greater world. Although certain voices might dominate the discussion, a variety of differences and nuances lurk beneath the uniform exterior. Ari Shavit’s My Promised Land: The Triumph and Tragedy of Israel and Ilan Pappe’s The Idea of Idea of Israel: A History of Power and Knowledge are just two of these “introspectives” that offer pointed advice for their country. Shavit’s deeply personal account of Israeli history differs greatly from Pappe’s critical historiography, but both are dissatisfied with the current order and call for a reinvigoration of debate and resolve in their society.

Ari Shavit’s My Promised Land offers an earnest lens into Israel at a critical time for the country and its neighbors. Through archival research, interviews, and personal reflections, the Haaretz columnist weaves together individual perspectives into an intimate portrayal of Israel’s paradoxical story. At a time when Israeli power and occupation inspire negative perceptions, Shavit puts forward an unequivocal defense of Zionism. Readers might disagree with his positions, but Shavit seeks to save Israel from both those who unfairly denounce the state and those who brush away its troubled past.

Although My Promised Land has several excellent and worthwhile chapters, Shavit best portrays his understanding of Zionism in his discussion of the Lydda tragedy—the expulsion of an entire city of Palestinians in July 1948. Rather than simply give the history book explanation of what happened to Lydda, he lets the people who experienced it tell their stories. These interviews depict how the violence carried out there tormented Israeli soldiers as well as the Palestinians who were expelled. Shavit also takes us into the mind of Ottman Abu Hammed, who remembers the humiliation, the heat, and the thirst of forced exile at gunpoint.

The weight of these events plagues its inheritors as well. Shavit writes of how the hypocrisy of the Lydda tragedy continues to haunt him:

Ultimately, Shavit decides to stand “by the damned.” He knows “that if it wasn’t for them, the State of Israel would not have been born” and neither would he. He condemns those who rejoiced in the expulsion and feels deeply for those cast out, but Shavit accepts Lydda as an evil of “historic imperative.” He writes that “the conquest of Lydda and the expulsion of Lydda…were an inevitable phase of the Zionist revolution that laid the foundation for the Zionist state.” Still, Shavit cannot ignore that he “still feels that something is very wrong” in Lydda. The irony of a dispersed people exiling another is not lost on him. If Israel is to deal with the Palestinians of today, it must acknowledge that this tragedy, and the Nakbah (expulsion) as a whole, “is an integral and essential part” of the Zionist legacy.

Exeter historian Ilan Pappe’s The Idea of Israel is another sort of recounting—one that chronicles the tug-of-war between the state’s desire to control narrative and power and the academic’s search for objective truth and justice. He demonstrates how Israelis have challenged their society’s narratives and introduced other perspectives into the conversation. Pappe’s historiography of the Israeli challenge to the “idea of Israel” details the development of an intellectual contestation of the political elite’s narrative, the ultimate failure of the critical post-Zionist moment, and the rise of the domineering perspective that reigns over Israeli society to this day.

The Idea of Israel describes the first Israeli-Lebanese War in 1982, followed by the First Intifada and the Oslo Accords, as a turning point in the history of ideas in Israel. These three events—a war of choice, an assertion of Palestinian identity, and the prospect of ending the occupation—dramatically shifted the national mood. For the first time, academics deepened Israeli awareness of some of the dark episodes in the country’s past, and the negative way others perceived Israel as a consequence. They challenged the Israeli state’s decades-old control over the power of ideas and brought to light the plight and perspective of Arab Jews, of women from the state’s founding through the 1970s, and especially of Palestinians, including their experience of the 1948 War and such events as the Lydda tragedy.

This period of open dialogue was short-lived. Pappe recounts how he and his cohort lost society’s support at the turn of the millennium in response to the breakdown of the Oslo process at Camp David in 2000 and the subsequent rise of the Second Intifada. Israeli society turned inward and “public discourse in Israel was reshaped along strictly consensual lines.” The provocative voices that once seemed to inject healthy discourse into the country were now seen as damaging to national morale or downright treasonous— equated to collusion with Palestinian nationalists and anti-Semites.

The most significant similarity between Pappe and Shavit is their acknowledgement that the status quo is unsustainable and that Israel, as the dominant, occupying power, must prepare itself to make challenging decisions ahead. They both criticize Israeli society’s lackluster resolve and insight. Shavit reserves strong critiques for a stagnant Israel whose leaders and people are indifferent to their lack of preparedness and resolve. Beset by an increasingly complex set of crises, Israel has “no…political platform to address Israel’s real challenges.” Unless the Israeli body politic rediscovers its sense of purpose and ingenuity, he warns, the country and the region will suffer: “An impotent Israel cannot make peace or wage war—or end occupation.”

Pappe notes that with the country’s political turn to the right came a new cadre of young historians that shunned criticism and returned to zealous promotion of the Zionist narrative and mythology. These historians do not reject the facts of Palestinian expulsion but transformed events that once incited moral outrage into virtuous acts. He believes a change is necessary, or else Israel will slip further away from liberal democracy. In fact, this is why he wrote The Idea of Israel: “the scenarios shared, for better or for worse, by post- and neo-Zionists alike—of life in a pariah state that maintains an apartheid regime—may come true. This book was written with the hope that these grim scenarios would not transpire, but with the uncomfortable sense that they are already unfolding before our eyes.”

My Promised Land will disappoint those hoping to understand Israel from Arab perspectives: it is told, with few notable exceptions, through Israeli eyes. Others note that Shavit tells his story from his male, Ashkenazi elite angle. They criticize him for confining other voices, including those of women, Sephardic Jews, and Israeli Arabs, to their particular interests. Individuals from these special groups are capable of understanding many of Israel’s challenges, they argue, and should not be consulted only on those problems that affect them.

There is a certain lack of nuance in Shavit’s conception of Israel’s international challenges. He paints with a broad brush when he claims that “a giant circle of a billion and a half Muslims surrounds the Jewish state and threatens its future.” He takes a defeatist outlook toward the Palestinians: “There was hope for peace,” he writes, “but there will be no peace here. There was hope for quiet but there will be no quiet here. Not in this generation.” The threat he perceives from Iran relies on only one other view to corroborate his own. Shavit is heavy on critiques but is by and large light on a way forward.

Pappe’s historiography often falls into similar traps. The Idea of Israel presents itself as a straightforward history despite Pappe’s direct involvement in its narrative. There are several times throughout the book in which any Zionist is treated as absolutely sinister in regards to the treatment of Palestinians and dealing with Arab neighbors, while all Palestinians and Arabs are well-intentioned or remain legitimate in their misdeeds. Certain claims appear without real substantiation.

My Promised Land and The Idea of Israel should be read widely for their distinctly different introspectives that enrich readers’ understanding of the breadth, and narrowness, of contemporary Israeli society. Thomas Friedman wrote that President Obama should discuss Shavit’s book with Prime Minister Netanyahu. But My Promised Land ought to be a conversation-starter with many others, from the fragmented body politic in Israel where resolve will be needed for peace to the embattled Palestinians whose leadership will be equally important during the trials ahead. Pappe’s admonition against groupthink offers a crucial window into the dangerous way Israel interacts with its people, the region, and the international community. Equally important, his insistence on open discussion offers a way forward. My Promised Land and The Idea of Israel each offer important insights for reaching peace in this troubled part of the world.

Adam Cohen is a contributor to Foreign Policy In Focus