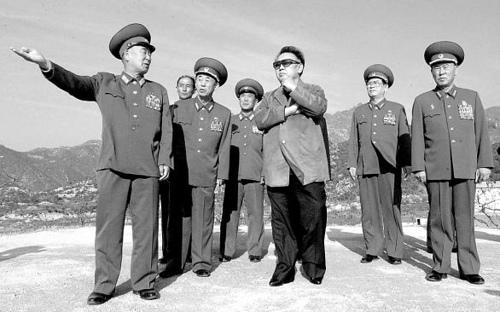 Denuclearize North Korea or end the Korean War? Here's a proposal for doing both at the same time.
By J.J. Suh | February 9, 2010 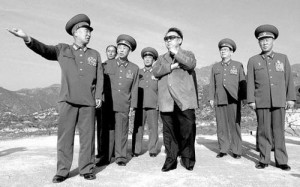 North Korea fired hundreds of artillery shells into waters near the disputed western sea border with the South last week, and the South Korean military returned warning shots, heightening the already high tension on the peninsula. The rising tension came amidst recent signals from Pyongyang that it wanted to negotiate a peace treaty to formally end the Korean War. If peace negotiations began, Pyongyang could return to the Six Party Talks on ending its nuclear programs.

So what’s going on? Are we about to see another bout of military confrontation or another round of negotiations?

Neither. We are in fact at a stalemate, yet again. At the heart of the problem is how to sequence denuclearization and peace. Both, of course, are desirable, but the question is which one should come first. Washington demands that Pyongyang return to the Six Party Talks and denuclearization first, whereas Pyongyang argues that peace talks must be held first. The logjam over the sequence has the potential to give Pyongyang the time to expand its nuclear capability and put the Six Party Talks into a coma, even as Washington and its allies hurt the regime with the continuing sanctions. Hence the “no war, no peace” situation continues, and the denuclearization process edges toward oblivion.

The stalemate may, however, be broken by the historic opportunity provided by the Global Nuclear Security Summit scheduled in April. The summit organizers should invite the leader of North Korea, along with those of China and South Korea. There, negotiators at both six-party denuclearization and four-party peace meetings can try to hammer out agreements on denuclearization, peace, and normalization at the summit level. The multilateral setting of the Global Nuclear Security Summit provides a unique venue where the denuclearization and peace meetings can be held with little difference in their sequence. Not only would the multilateral setting raise the profile of the meetings, but it will also increase international pressure on Pyongyang and Washington to abide by the agreements once they make a commitment on the international stage.

Why wrangle over the intractable chicken-or-egg problem when we can have both at the summit table?

Last year the Obama administration had a rocky start in its dealings with North Korea. Its repeated warnings against Pyongyang’s missile launch in April and nuclear test in May were completely ignored. It felt that it had extended a hand of diplomacy to Pyongyang, only to be bitten twice: first by the missile launch and second by the nuclear test. It responded exactly the way it had publicly declared it would. It worked with the Security Council to issue a presidential statement to condemn the North’s rocket launch. When the North Koreans conducted their second nuclear test on May 25, the Obama administration proceeded to ratchet up the pressure on the miscreant and worked with the international community to have the Security Council issue on Resolution 1874 that “condemned in the strongest terms” the nuclear test. The resolution tightened sanctions against the North by prohibiting funding for proliferation activities, widening the ban on arms imports-exports, and calling upon member states to inspect, seize, and dispose of banned cargo from and to North Korea. The Obama administration, believed the future viability of the nonproliferation regime was at stake, and it felt compelled to respond with decisive diplomacy.

On the other side of the Pacific, the Kim Jong Il regime felt that it had been slapped twice by the American hand. First the UN condemned what North Korea argued was a satellite launch in April, and then the Security Council penalized it for testing its “deterrent.” The day after the UN Security Council issued the resolution, the North’s Foreign Ministry declared that it was now “an absolutely impossible option for the DPRK to even think about giving up its nuclear weapons,” sounding the death knell for the Six Party Talks. Moreover, it went on an offensive by publicly declaring that it would commence uranium enrichment as part of an effort to build its own light water reactor. This declaration raised the risk of proliferation, as well as the stakes for any future denuclearization talks should they be resumed. To Pyongyang, the issue was nothing short of its survival and sovereign rights, and it took decisive measures to protect them.

Driven by these competing concerns, Washington and Pyongyang were racing toward a head-on collision. Then, in August, former President Bill Clinton visited Pyongyang to bring two American reporters home. Just as former President Jimmy Carter’s visit to Pyongyang averted an impending confrontation in 1994, Clinton’s trip created some breathing space. Just prior to his visit, Secretary of State Hillary Clinton gave an apparent nod toward Kim Jong Il’s authority at a press conference on July 10. Asking Pyongyang to release the reporters, Secretary Clinton said she hoped they would be granted “amnesty through the North Korean system.” Pyongyang could interpret this statement as an acknowledgement of Kim’s authority — whether or not Clinton actually meant it — because the amnesty authority, which used to belong to the president, had just been transferred to the chairman of the National Defense Commission (NDC) in the April constitutional amendment.

Buoyed by what he thought was Washington’s change of heart, Kim Jong Il began his “charm offensive.” He first reached out to South Korea on soft issues to refurbish his image. He met on August 16 with Hyundai’s Chairwoman, Hyun Jung-En, and agreed to resume the Kaesong and Kumgang tours and hold a reunion of separated families in the fall. Their meeting was followed by a North-South Red Cross meeting and agreement on the reunion. The warming process accelerated when Kim Jong-Il dispatched a special envoy delegation to send condolences to the late Kim Dae-Jung, who unexpectedly passed away in August. Taking advantage of its presence in Seoul the delegation, headed by Kim Ki-Nam, paid a visit to President Lee Myong-Bak, who had earlier indicated his government’s readiness to hold dialogue and meetings “at any time at any level,” raising the hope that the frozen inter-Korea relations might be beginning to thaw.

Extending his charm to China, Kim turned to a weightier issue. On September 18, he told Dai Bingquo, President Hu Jintao’s special envoy, that North Korea “will maintain the goal of denuclearization” and that he hopes to resolve the issue through “bilateral or multilateral talks,” a remark indicating Kim’s willingness to consider going back to the Six Party talks. Kim’s charm offensive culminated in his meeting on October 5 with Chinese Premier Wen Jiabao where he invoked the sacred words that had disappeared from the North’s official publications since the second nuclear test: “It is Kim Il Sung’s will to denuclearize the Korean peninsula.”

The reappearance of the sentence linking the desire of North Korea’s founder to the elimination of the nuclear program signals Kim Jong-Il’s change of heart. He is now ready to explore the possibility of trading his nuclear programs for a peace guarantee, as recent statements from Pyongyang indicate. Also, his readiness creates a diplomatic opening for Washington to roll back Pyongyang’s nuclear programs in return for a peace treaty, as recognized by Clinton in Afghanistan last November.

Thus the stage is set for quid pro quo. Peace is a good thing for both Washington and Pyongyang, so is denuclearization. So why not trade one for the other? It is one of the rare win-win situations for both parties, except that Washington and Pyongyang might not see it that way. There is so much bad blood, figuratively and literally, between them that the sequencing of peace and denuclearization remains a potential deal-breaker. Concerned that Pyongyang is trying to buy time with potentially lengthy negotiations for a peace treaty, Washington wants the resumption of the Six Party Talks and denuclearization first. Pyongyang, on the other hand, demands a peace treaty before denuclearization because it fears an attack once it gets rid of what it considers “nuclear deterrent.” Hence the quid pro quo becomes a deadlock.

A possible way to breach the deadlock seems a 6+4+2 or 4+6+2 formula: holding a six-party denuclearization, a four-party peace, and a bilateral meeting back-to-back at the summit level. The United States and North Korea could hold a four-party peace meeting with China (a de jure party to the Korean War) and South Korea (a de facto party) to declare the end of the war and sign a peace treaty. The four-party meeting can be held immediately before or after a six-party meeting, where the six parties’ leaders sign an agreement on the peaceful denuclearization of the Korean Peninsula. If the leaders commit themselves to the principles contained in the important September 19 Joint Statement of the Six Party Talks — peaceful denuclearization of Korea, normalization of diplomatic relations, economic cooperation, and “lasting peace and stability in Northeast Asia” — they would be taking a critical step toward institutionalizing the talks in a more formal body. In addition, Washington and Pyongyang could hold a bilateral meeting to discuss issues relevant only to them, such as diplomatic normalization.

The Global Nuclear Security Summit will provide a fortuitous venue where the leaders of the six countries can hold the these meetings sequentially on a global stage. Not only would the multilateral setting render the order of the meetings meaningless so long as the three meetings are held during the world summit, but it would also increase international pressure on the participants to live up to the series of agreements signed before the world.

Such a possibility will be facilitated by an exchange of declarations. Washington can find a creative way to allay Pyongyang’s concerns about its dignity and independence, mindful that they are central to the latter’s complaints about the UN sanctions. Pyongyang can reciprocate, or take the initiative by declaring that it understands the international community’s concerns about proliferation and is willing to cooperate with the world to address them. Such an exchange of declarations, public or private, would help all the parties move to the next level of “action for action.” But it has to be done soon, not to miss the historic opportunity offered by the Global Nuclear Security Summit. And much care needs to be given to each other’s concerns lest a wrong word derail the initiative.

Washington and Pyongyang have taken a long detour, through a nuclear test and sanctions, to get to where they are now. The convoluted history of the past several months should serve as a reminder to everyone, in the United States as well as North Korea, of the fundamental difference between the two positions. American top priority is nonproliferation whereas North Korea is primarily concerned about its dignity and survival. This fundamental difference led ultimately to the nuclear test and the sanctions. The clash of mindsets also brings into relief the one thing that the two have in common: their utter failure to understand each other. Ambassador Stephen Bosworth and his North Korean counterpart will do well by starting to address that rare commonality. To forestall future misunderstandings or manage them in a controlled manner should they occur, Washington and Pyongyang should establish a liaison office as soon as logistically feasible.

J.J. SuhJae-Jung Suh, a contributor to Foreign Policy In Focus (www.fpif.org), is an associate professor and director of Korean Studies at the School for Advanced International Studies at Johns Hopkins University. He is the author of Power, Interest and Identity in Military Alliances (2007).