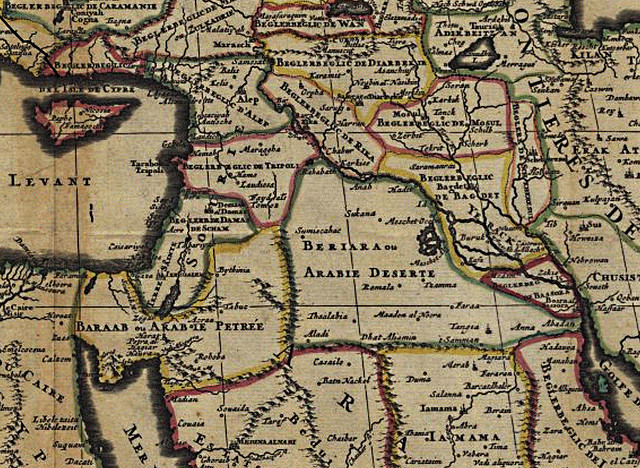 Similar to the dissolution of Yugoslavia in the 1990s, ethno-sectarian fights will inevitably remold the Middle East and reshape the boundaries for new nation-states. Pictured: the Middle East in the 1600s. (Photo: Paolo Porsia / Flickr Commons)

It was a foregone conclusion that Middle Eastern states would seek to adjust national boundaries set by the West.
By Keith K C Hui | July 21, 2015

Take a look at the map of the Middle East and North Africa. You can see many straight lines labeled as the ‘national’ boundaries of countries like Yemen, Oman, Iraq, Syria, Egypt, Sudan and so on. These unnatural political borders which were arbitrarily sliced by several men during the de-colonization era had foretold you that that the flesh and blood peoples living there would, once sufficiently armed, endeavor to reset the fences for their clans after having suffered from all kinds of ethnic-sectarian clashes with their neighbors. What has been more frustrating is that, Afghanistan, Iraq and Egypt under the American ‘administration’ have failed to exemplify that democratic elections, no matter how genuine they are, can resolve the sectarian conflicts inside these state. In Iraq, for instance, since the Sunnis as a forever minority have no opportunity of winning this head-count game to gain the mandate at Baghdad, so why not join the jihadists to establish a new state of their own?

“Disorder is worse than injustice.” It seems such a Robert D. Kaplan’s summary of Henry Kissinger’s admonition for policy makers [Note 1] has caught the attention of the White House officials. As the term ‘Levant’ covers the areas and peoples in Cyprus, Egypt, Iraq, Israel, Jordan, Lebanon, Palestine, Syria and even Turkey [Note 2], the armored tanks bearing the flags of and the endless suicide bombings in the name of ‘Islamic State of Iraq and the Levant’ (ISIL) are prognostic signs that the straight boundary lines in the Middle East are being defied. The Mideast map is about to be redrawn after some more series of bloodsheds spreading from Syria (Alawites vs Sunnis) to Iraq (Kurds vs Sunnis vs Shi’a), Yemen (Zaidi Houthis vs Sunnis vs Al-Qaeda), Egypt (Muslim Brotherhood vs the secular army), Omen, Qatar and so on. Such an ethno-geographical reshuffle fluttered by the radical jihadists, if not checked or kept in certain orders, would at worst obliterate the United States’ rule-setter status in this region.

However, unknotting the historical, religious and economic badger among the Mideast peoples appear to be beyond the Americans’ sole power. After 25 years of combat since the Gulf War in 1990-91, sending platoons of infantrymen and marines to land on this vortex of sands would hardly gain popular endorsement.   It therefore makes sense for Washington to draw out any functioning local stakeholders to help, especially providing foot soldiers to bear the brunt of decapitation.

Inside this bleeding region nowadays, there are only two states still actually functioning — Saudi Arabia and Iran — whereas all others (including the relatively stable UAE and Kuwait) are either heavily dependent upon external guidance for governance or already in civil war of some sort. Although these two countries appear to be two hostile legions tearing the region apart, they are capable of tuning the proxy fights between them (such as the combat in Yemen) and more importantly, constraining the growth of the scattering extremist groups because they both possess the necessary insider information and subterranean networks (Iran is well known for financing the Hizbullah movements around the Persian Gulf and Abdallah al-Turabi’s PIO networking with the Sunni jihadists [Note 3]). When enemy’s enemy is friend, the tactic of cultivating a common ground with Iran to form a phalanx should not be deemed as an anomaly.

Iran has the capacity of being regarded as a functional team member on at least four considerations. Firstly, it is an administratively reliable state since its power succession system, democratic or not is not a concern now, has been working well for policy consistency. After Ali Khamenei had served two four-year terms as the President of Iran (1981-89), all his successors — Rafsanjani (1989-97), Khatami (1997-2005) and Ahmadinejad (2005-13) — could smoothly complete their presidency respectively (this merit has been overlooked by many pundits but a similar helmsman ruler system in Beijing has proved that it works really well).  Given this track record, the incumbent President Hassan Rouhani (2013-), who has portrayed a liberal image for himself, will probably remain steadily in office to abide by the deal and can be expected to act resonantly to the West’s demands throughout his terms until 2021.

Secondly, Iran’s trustworthiness to observe the P5+1 (or E3+3) deal and inclination towards collaboration have somehow been insured by the Chinese leaders who are keen on re-thriving their Silk Road which has to pass through the Middle East to reach Europe and Africa [Note 4].

Thirdly, playing ethno politics between the Sunni Saudis and the Shi’a Persians is no better way of  keeping Tehran’s ambitions in check. Saudi and its satellite states (some of which are suspected of financing the ISIL) will act as the indigenous vanguards to counterbalance Iran’s influence when re-drawing the new national boundaries in the ‘Levant’ zone.

Fourthly, many Iranians, especially those in Tehran, can speak or at least understand English [Note 5]. Lifting sanctions can promote substantial cultural and commercial exchanges between this formerly U.S.-friendly nation and the Americans. Better acquaintance with Western thought would not just soften the extent of Anti-Americanism there but also widen the scope for compromise(s) in future. (Unfortunately, it is the American side that has a new problem in this aspect. Professor Charles King of Georgetown University recently highlighted one of the reasons for the American “Decline of International Studies” — the shrinking enrollment in the National Security Education Program-sponsored courses for all the “critical languages” which include Arabic, Russian and Persian [Note 6]).

Similar to the dissolution of Yugoslavia in the 1990s, ethno-sectarian fights will inevitably remold the Middle East and reshape the boundaries for new nation-states. The Obama Administration, having noticed that the United States is unable to set the new rules unilaterally,  is wise to take the necessary and calculable risks of play ethno politics between Saudi and Iran to restore order and retain its geopolitical interests here.