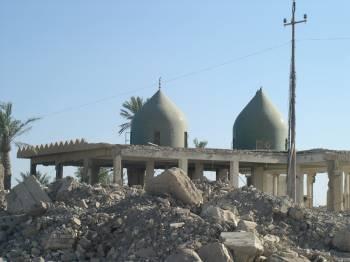 While politicians in Washington argue over the future of Iraq, half a world away a bloody battle for the soul of Iraq is being fought by Iraqis who are paying a high price for the U.S. occupation.
By Bonnie Bricker, Erik Leaver, Adil E. Shamoo | March 7, 2007

While politicians in Washington argue over the future of Iraq, half a world away a bloody battle for the soul of Iraq is being fought by Iraqis who are paying a high price for the U.S. occupation.

When asked about Iraq and its future, many Iraqis have the same refrain: there is no more Iraq, Iraq is lost. Others say: make us safe or leave us alone.

These desperate voices are heard from inside Iraq and from Iraqis abroad. Just as Americans saw in the aftermath of Katrina the stark contrast of those who had and had not the means to leave the devastation, in Iraq those who have the means hope to escape death and suffering by leaving their homes. Those who have the means, nearly two million of them according to U. N. sources, have fled Iraq to countries in which they try to protect their families in strange lands and often to inhospitable environments. Within Iraq an additional 1.8 million refugees are unable to leave their country but also are unable to live safely in their homes. Those Iraqis who have no means to leave Iraq are struggling to survive under a situation described in the latest National Intelligence Estimate (NIE) as “more complex” than a civil war.

This war has lasted four years–an equivalent to the length of the American Civil War or World War II. Iraqis have had enough and their desire is to be left alone regardless of the consequences. In a September 2006 World Public Opinion poll (conducted by the Program on International Policy Attitudes at the University of Maryland), 70 percent of Iraqis wanted the U.S. to commit to withdrawal within the year. Support for attacks on U.S. forces had grown to 60 percent of the Iraqi population. The majority of Iraqis reported that the presence of the United States created more conflict. The sentiment is clear, if left alone, Iraqis themselves will determine the consequences of this conflict instead of the actions of foreign troops.

President Bush and his supporters hide behind the possibility that if U.S. troops leave, there will be a blood bath. According to the latest NIE four simultaneous wars are being fought in Iraq by various groups: “Shia on Shia,” “al-Qaeda,” “Sunni insurgents,” and “criminals.” For Iraqis, they are better defined as thugs, foreign fighters, and former neighbors turned into insurgents.

Before the U. S. invasion of Iraq, Kurds, Sunnis and Shi’ites lived together in Iraq for hundreds of years without much violence. Yes, there were some ethnic, religious and sectarian differences; but intermarriage among groups was common and neighbors looked out for one another regardless of sectarian differences. Following the U. S. invasion, the formulation of Iraq’s Coalition Provisional Authority based on ethnic demographics contributed a great deal to unearthing old fissures and deepening ethnic hostilities.

The fighting against U.S. troops and between these groups creates as many as 100 or more deaths per day. Thirty-four thousand Iraqis were killed in the conflict in the last year according to the Brookings Institute’s Iraq Index, confirming that Iraq is already in the midst of a civil war. According to the Iraq Coalition Casualty Count, deaths of Iraqi security forces and civilians numbered over 1,800 in January 2007, following months of attacks in which death rates by the month for Iraqis ranged from 1,500 to more than 3,500 (in September 2006). While the February 2007 count has been less, the change in attacks, including targeting chlorine trucks, is an ominous change that could lead to even greater challenges.

Some fear that the Iranians may gain influence if the U.S. leaves and that the U.S. will not be able to secure the flow of Iraqi oil to fill our growing energy needs. These fears should not be dismissed. If the U.S. leaves, the Iranians may temporarily have more influence than the U.S. But if the Iranians exercise any colonial tendencies in Iraq, they will suffer the same consequences the U.S. has had in Iraq. Iraq may become their burial ground and the undoing of the Ahmadinejad government. There is a great deal of discontent among Iranians towards their current regime. If the U.S. could not conquer Iraq, the Iranians will not be able to either.

The war and occupation has been fanning the flames of violence for too long in Iraq. It is time to let the Iraqi people extinguish the flames and begin their long process of rebuilding their nation.

Bonnie Bricker, Erik Leaver, Adil E. ShamooAdil E. Shamoo born and raised in Baghdad is a professor at the University of Maryland School of Medicine. He writes on ethics and public policy and can be reached at: ashamoo@umaryland.edu. Bonnie Bricker is a freelance writer. Both are contributors to Foreign Policy In Focus.