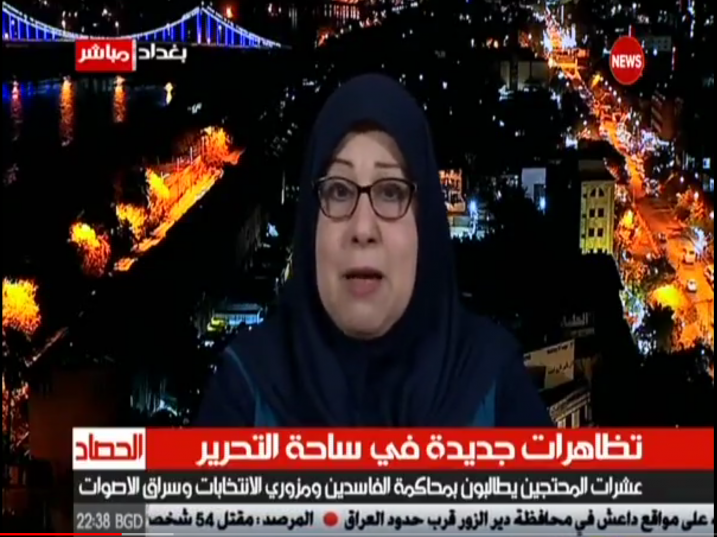 With Iraq's political future up in the air, protesters are hitting the streets over water shortages and electricity outages.
By David Bacon | July 31, 2018

As uncertainty continues over the results of Iraq’s May 12 election, the deterioration in social services that brought about the victory of the Sairoon coalition has impelled thousands of people to take to the streets to protest the increasingly difficult conditions of their lives.

Throughout July, Iraq was rocked by demonstrations, road blockades, tent occupations, and the invasion of oil fields by thousands of people, especially in the country’s oil-rich south. Thirteen people were killed in a series of at least eight protests in the first half of the month, and at least 47 others were wounded, including two children by gunfire and one beaten with rifle butts. The government cut off Internet access for days in many parts of the country to make organizing the protests more difficult and impede the flow of information about the repression.

The protests started at the West Qurna 2 oilfield on July 8 and spread to other oil fields in the area, including the huge Rumaila field, and into the city of Basra itself. From there they spread to other provinces and cities, including Baghdad, Kut, Amarah, Karbala, Najaf, Babil, Dhi Kar, Missan, and Muthanna. An oil worker, Muhammad, told Human Rights Watch investigators that he saw one man, in a tent erected on the highway, struck and killed by a bullet. That road occupation continued for several days afterwards, while other street occupations were set up in Basra, which were then also attacked by police.

The Badr Brigade, headed by Hadi al-Amiri, a presidential candidate in the last election, was among the forces shooting demonstrators. Protesters demonstrated outside the organization’s headquarters in Basra, and Badr Brigade paramilitaries then fired on the crowd, wounding two children.

Videos and photos led to the identification of other government forces responsible for the shootings, including federal anti-riot police, as well as the police for the oil fields. People were beaten with clubs and pipes, and some were beaten after being taken into custody. A Humvee hit one person, and troops used teargas and water cannons in addition to bullets.

At least 81 people were arrested, and as of the end of July none had been released or charged. Jabbar Mohammed Karam al-Bahadli, a lawyer petitioning for the release of those detained in the protests, was killed in a drive-by shooting on July 23 in Basra.

Demonstrations escalated when electrical service collapsed completely in several provinces, including Basra, Shi Qar and Missan, and partially in Nineveh and Kirkuk, on July 27. Temperatures that day reached 120 degrees, not unusual for the Iraqi summer, and people had no power to run air conditioners or other cooling equipment. The government’s Southern Electricity Transport Department blamed the outage on “a technical malfunction in the Nassiriya thermal station on Thursday afternoon [which] led to the disconnection in the southern area and the stoppage of generating stations, and put the high voltage lines out of service.”

In mid-July government negotiators had promised to respond to demonstrators’ demands, and the protest wave abated temporarily. But the electrical failure, compounded by more violence against protesters by authorities, produced a new round of demonstrations. “It is expected that the electricity network will be restored to its normal status in the upcoming period of time,” the Southern Electricity Transport Department said in its Thursday statement. “Normal” 24-hour electrical service in southern Iraq, however, is basically non-existent.

In the West Qurna 2 field demonstrators mounted a sit-in on the highway. At first, local officials seemed willing to negotiate with them, but security forces then arrived to disband the protest encampment. An Iraqi brigadier general then brokered an agreement with Lukoil, the Russian company that operates the field, to provide 200 jobs to local residents from Az al-Din Saleem. Nevertheless, demonstrators both at West Qurna 2 and at Zubair announced that they would continue their protests.

The Role of the Unions

Iraq’s trade unions, especially the oil workers, have played a central role in organizing the demonstrations. Hassan Gomaa Awad Asadi, president of the Federation of Oil Unions in Iraq, explained the protests’ origins in an email interview:

The demonstrations in southern Iraq are not an accident. They are the accumulation of 16 years of rage. The southern regions in particular suffer from clear negligence by successive governments, although these areas are the richest in Iraq, where 75% of the oil is produced. Yet they suffer from marginalization and deprivation.

The current government and the previous governments are responsible for the deteriorating conditions of electricity and water. The Iraqi people do not have the most basic rights of citizenship. Their demands are simple and just—to provide basic services. People have a legitimate right to public services, such as electricity and desalination of water. The government must provide job opportunities for the unemployed, who constitute a very high percentage of Iraqi society.

Unfortunately we do not see any response. Instead, the state has threatened demonstrators with arrest, and even fired live ammunition at them. This has enraged the public, and today’s demonstrations in Basra are the result. Demonstrators have begun to escalate their demands, which now include the dismissal of the government. Participating in demonstrations is a legitimate right of the people, and the demonstrators are the sons and daughters of Iraq.

The Federation of Oil Unions is very involved in these demonstrations. From the beginning Basra has been the spark of this movement, and our union has been a key player. We will not abandon the defense of our nation and our people. We believe that the people have the right to the oil wealth. This is what the Iraqi constitution says. And we are responsible to the people, so we are fighting to improve their situation.

The demonstrations have spread into the oil fields, especially in the north of Basra, West Qurna 1 and West Qurna 2. The people most affected by this crisis live near the oil fields, so this is a message the angry masses have delivered to the government. We are able and willing to go anywhere to claim our legitimate rights.

Protesters included a group in Garma, which accused the oil companies that operate the fields of contaminating the water and soil, and demanded “treatment of high water salinity that has killed the trees and plants and destroyed our land.” The Al-Jazaeer Coalition, composed of over 12 tribes in Basra province, said in a statement distributed by the Baghdad News Agency that they experience “environmental pollution as a result of clouds of smoke” and “the destruction of agricultural land and the pollution of the water.” Exxon Mobil and the Russian company Lukoil operate the West Qurna 2 fields, BP handles the Rumaila field, the Malaysian Petronas is in charge of the Gharaf field , and the Italian ENI runs the al-Burjisiya field .

Rising water salinity is part of a broad and growing environmental crisis. The Iraqi government failed to protest effectively over the construction of dams in Turkey and Iran on the Tigris River. The reduction of water flow into Iraq has exacerbated the crisis. This year the government even banned the cultivation of rice and corn because of the water shortage. “Thousands of people may be displaced and become migrants due to the scarcity,” predicted the Iraq Civil Society Solidarity Initiative.

Hashmeya Alsaadawe, president of the Basra Trade Union Federation and head of the electrical workers’ union, asked on Iraqi national television, “Against whom are these military troops and arms directed? To the unarmed citizens who call for their legitimate demands of a dignified life! They only need water, electricity, and job opportunities. Who should we address our demands to? The local government doesn’t respond!”

Alsaadawe and other Iraqi unionists supported Sairoon, a political coalition in Iraq’s May 12 national elections that won the most deputies, with 1.3 million votes. It was followed by the Fatah Party of Hadi al-Amiri, whose base rests on militias with ties to Iran. Al-Amiri’s Badr Brigade, however, has been accused of firing on demonstrators in the July protests. No party has been able to assemble a coalition with support from a majority of deputies and thus form a new government. In addition, the vote count in several provinces has been challenged. The ensuing political paralysis has accentuated the frustration of Iraqis with the deterioration in electricity and water services and employment, for which the government is responsible.

Sairoon itself is the product of many years of street protests over these issues. In the Iraqi Spring of 2011, at least 45 people died and hundreds were arrested. In 2015, Iraqis began demonstrating every Friday, denouncing the corruption of sectarian political parties, holding them responsible for the crisis in electrical power, clean water, and employment.

Sairoon’s program grew out of those rallies. It called for an end to the system that divided political positions and government support along sectarian lines, a system imposed by the U.S. after its occupation of Iraq in 2011. Basing a governmental structure on sectarian political parties led to a system of patronage and division of spoils, and consequently enormous corruption. The alliance’s slogan in response was “To Build a Civil State, a State of Citizenship and Social Justice.”

The root of our problems in Iraq is the American government. After the occupation it pushed on us people who are not competent. U.S. pressure, and the intervention of international financial institutions in the administration of the state, have brought about the current crisis. After more than 16 years, all the political parties, including the Islamist and Shiite parties in the state administration, have failed.

I do not think that the demonstrations are a consequence of the elections, although people are not immune from the electoral system. Rather, these events are an inevitable result of the government’s neglect and financial corruption in the state system. The parliamentary system in Iraq is a failure and corrupt to the bone, filled with politicians who pass laws just to advance their own self-interest. This is an inevitable result of the system of political quotas, which has caused us great harm.

This corrupt system is responsible for the massive theft of public funds. This despicable conduct is basically stealing from the poor. There is no accountability for how they are spent. Since 2003 the government has wasted more than $48 billion dollars on the electrical grid alone, while the country lives in darkness.

David Bacon is a photojournalist, author, political activist, and union organizer who has focused on labor issues. He is the author of In the Fields of the North / En los Campos del Norte (University of California, Colegio de la Frontera Norte, 2017).