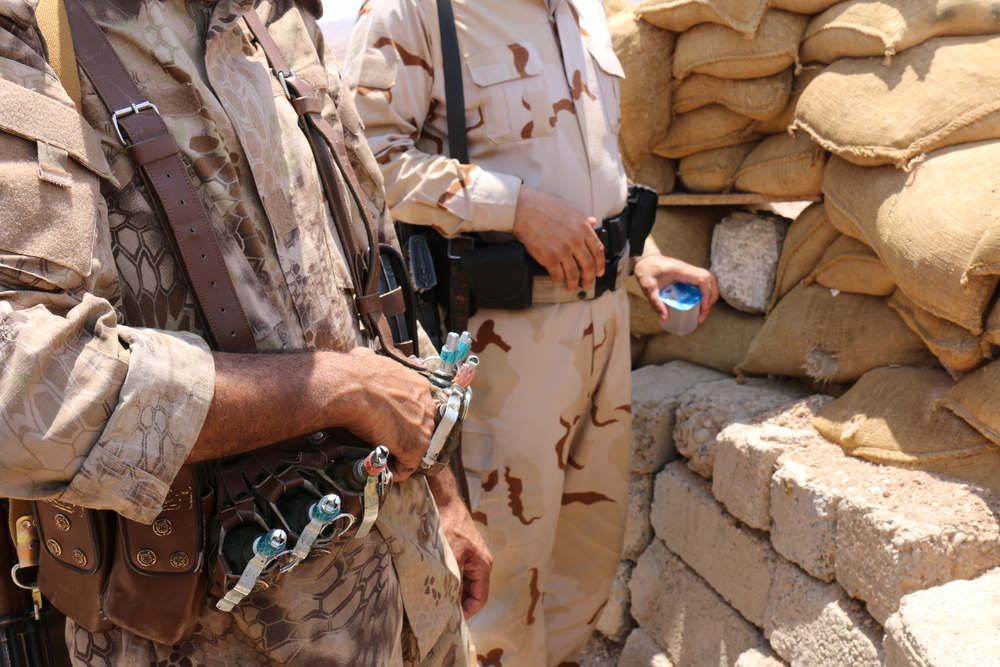 Is There Rule of Law in Iraq?

Human rights advocates in Iraq use these descriptions all the time when we refer to the men with guns behind the killings, abductions, and torture of protesters, activists, journalists, and communities seen to have been close to ISIS in Iraq.

In recent days we have seen these men go further than ever before, including a brazen effort on November 7 to assassinate Iraqi Prime Minister Mustafa al-Kadhimi in his home, using three armed drones.m

Many don’t dare go further in identifying who exactly these men are, the groups they belong to, and who they are getting their orders from — at least not in public. But on October 25, in a courtroom in Basra, someone finally came out and said it.

And what he said raises a bigger question: Can the Iraqi state even provide the rule of law?

Explosive Revelations About the Murder of Two Journalists

In a nutshell, his testimony indicated that the armed groups called Popular Mobilization Forces, which were formed to help defeat ISIS and some of which have close ties to Iran, may be calling the shots in Iraq and are independent of — and more powerful than — the government.

On that day, a judge at Basra Criminal Court presided over an investigative hearing for Hamza Kadhim al-Aidani, accused of killing two people on January 10, 2020: Ahmed Abdul Samad, a Dijlah TV reporter, and Safaa Ghali, his cameraman. The local media widely covered al-Aidani’s conviction for the murders and subsequent death sentence handed down on November 1.

What the media covered less, and the government refused to comment on, were the explosive statements al-Aidani made during the hearing.

Two people who attended said that al-Aidani, a Basra police commissioner, admitted that he was also a member of an abusive Popular Mobilization Forces unit formally under the control of the prime minister.

He said he fought with the group to retake the city of Fallujah from the Islamic State (ISIS) in 2016. He admitted that he was a member of a so-called “death squad” and was involved in the killing of the two journalists, the sources said. He said he and team members used the local PMF Commission (the PMFs’ governing body) office in Basra to plan the killings and hide their cars and weapons after the fact.

The court witnesses told Human Rights Watch that Al-Aidani told the judge the police had not arrested the head of his squad within the PMF unit but instead allowed him to flee the country. This was the man, he said, who killed the journalists in front of him. He said that the man told the team that the Iranian supreme leader, Ayatollah Ali Khamenei, had issued a fatwa (a religious legal ruling) that journalists covering protests with calls against Iran and the PMF, and those inciting the protests, should be killed.

He said they targeted Samad because he had covered a protest on December 13, 2019, on a street that the PMF had renamed Khamenei Street in 2019. During the protest, demonstrators burned a large picture of Khamenei that the PMF had hung up on the street. Samad, in his coverage, asked viewers why the street was not instead renamed after an Iraqi leader. The judge ultimately said that he would not include this detail in the record.

Al-Aidani’s apparent comments, and the fact that he was standing trial alone, raise another question. Where were the other suspects connected with this case?

In February, the authorities had said they arrested four people who were behind the killings. But as many questions as his comments raised, they also provided clear and disturbing answers — including just how powerful the PMFs are in Iraq, if they can even give a police commissioner orders to carry out extrajudicial killings.

Out of Control Militias

The PMFs were originally formed in 2014 as informal armed groups outside the state structure to combat the advance of ISIS.

After the collapse of the Iraqi army, Iraq’s parliament voted in November 2016 to incorporate the PMFs into the government’s armed forces. At the time, groups like mine expressed concern that this step might mean letting the fox into the henhouse. But diplomats and senior Iraqi officials assured us in meetings that we were seeing it all wrong. Instead, this was a move to break up these units, by integrating their fighters into state structures that answered to the prime minister as commander-in-chief. This would, they said, break the PMFs’ power.

But that is not what happened. The PMFs have remained independent entities, some with varyingly strong ties to Iran, some pursuing their vision of nationalism, and some pursuing criminal motivations aimed at capturing control of money, oil, and other resources. In addition, the PMFs have been able to infiltrate and control parts of the state security structure.

The result of this is a state in which some of its own fighting and law enforcement units do not answer to the government nor have an interest in protecting the integrity of its structures. They are driven by entirely different motivations.

Large-scale popular protests that began in 2019 demonstrate the way in which the PMFs flaunt government directives. After the initial days of demonstrations in October, and a mounting death toll of protesters, then-Prime Minister Adil Abdul-Mahdi publicly ordered his forces not to use live ammunition against people in the streets. And yet armed forces continued to fire live rounds into the crowds, killing protesters.

Through my engagements with the government, I never got the sense that Abdul-Mahdi was lying to the public, but why then was a clear order from the commander-in-chief being ignored?

The truth is that the forces firing on people were either not listening to his orders, or they were receiving orders from elsewhere. Al-Aidani’s testimony in court suggests that there might be some truth to this terrifying prospect.

The Rule of Law in Doubt

When Human Rights Watch documents unlawful killings in Iraq, we call on the authorities to hold those responsible to account, in line with the government’s obligations under international and national law.

But what can the state authorities now do about such groups? I remember the first time I used the phrase “failed state,” when speaking about Iraq, in 2020. A diplomat was asking what I thought could be done to address this wave of killings of protesters and activists, in the context of impunity.

The impunity was caused not necessarily because of a lack of will by judicial authorities to hold killers accountable, or indeed a lack of information as to who is responsible for these assassinations. More often it was caused by the authorities’ knowledge that these groups can easily subvert any and all attempts by the government to hold them accountable.

Al-Aidani’s testimony really does raise the question of whether the Iraqi government is able to enforce the rule of law on its streets. If the answer to that is no, or even maybe, the real question is where we go from here.

Belkis Wille is a senior crisis and conflict researcher at Human Rights Watch who has long followed events in Iraq.