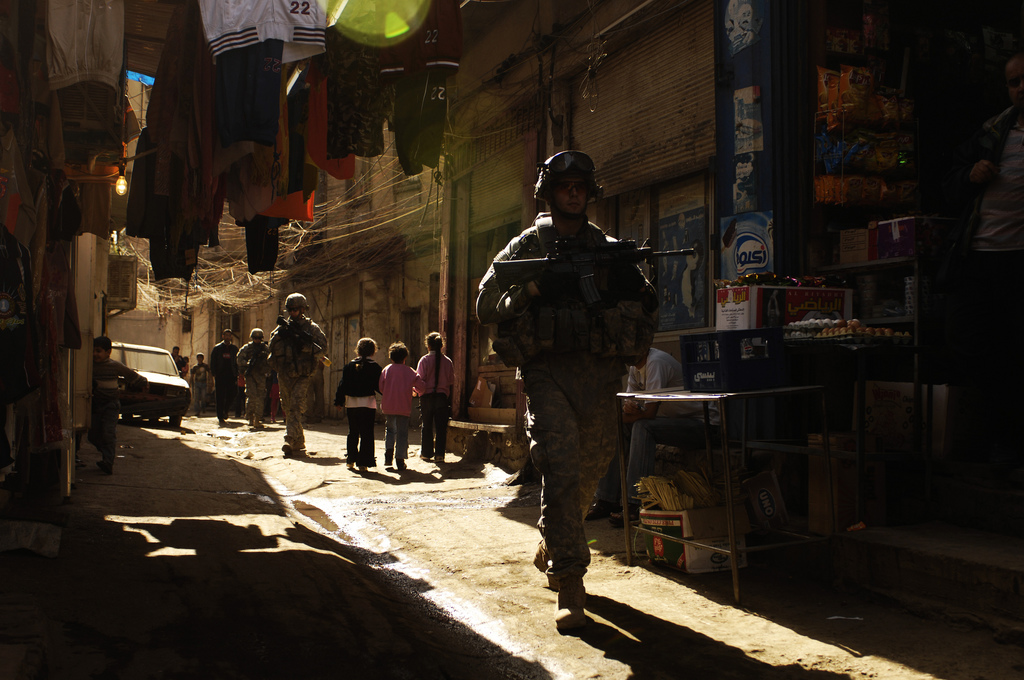 After helping to precipitate Iraq's slide into sectarian violence, the U.S. should not make matters worse by providing money or arms or boots on the ground in service of a fundamentally compromised Iraqi government. (Photo: U.S. Army / Flickr)

In the U.S. war on Iraq, hundreds of thousands died the sort of deaths that, if broadcast in an ISIS video, would have inflamed international opinion.
By Adil E. Shamoo, Bonnie Bricker | March 5, 2015

The Middle East is suffering the blowback from rotten U.S. policies, disastrous wars, and cultural turmoil. ISIS and its ilk are one result.

ISIS — or the so-called “Islamic State” — is the latest and most horrifying iteration of the modern terror groups that have plagued the region in recent years. With 20,000 to 30,000 combatants and recruits streaming in from all over the globe, the group is unlikely to be significantly degraded by U.S. air strikes — not when political conditions in the Middle East continue to favor it.

The media often depicts ISIS recruits as lost souls in search of a cause or suffering from mental illness. That may be true in some cases. But these explanations are not sufficient to explain ISIS’s resilience and recruitment capabilities.

No organization, especially a terrorist one, can survive without support. That can range from passive acceptance to active assistance, and it comes from individuals who may view ISIS as either the lesser of many evils or else a righteous group waging a holy war.

Both views are fueled not only by decades of Western colonialism, but also by recent U.S. invasions, drone strikes, and the installation and support of corrupt and brutal puppet governments. When Washington holds hands with dictators, or strikes oil deals that benefit only the hyper-wealthy, hatreds are remembered and passed down over the generations.

Yes, ISIS has committed unspeakable atrocities. But it’s too easy to forget that the U.S. invasion of Iraq killed some half a million Iraqis by one estimate — most of them civilians — and wounded another million. Looking at the numbers, we can only imagine the thousands of Iraqi children killed by bombs who may have actually been burned alive or smashed by rubble. They died the sort of deaths that inflame Arabs and Muslims around the world. No mother, father, sister, or brother will ever forget.

The invasion also brought torture and sexual abuse of Iraqi prisoners, in blatant violation of international law and the most rudimentary elements of humanity. And the pictures of torture we saw are only a small part of what happened.

The aftermath of the war only fueled the outrage felt by Iraqis and the rest of the Muslim and Arab world. The puppet government installed by Washington made corruption a reality at every level of daily life, and it badly neglected and abused the country’s non-Shiite populations. Daily life continued to be miserable, if not fatal.

As a nation, the United States likes to tout its moral superiority. Yet the bleak contrast between what Iraqis experienced and America’s self-proclaimed exceptionalism led many Iraqis to join a group that made its own set of promises — ISIS — and the results have been terrifying.

Meanwhile, America’s allies in the Middle East aren’t much better.

Saudi Arabia beheads over 100 people per year, and its fellow Gulf States defy any semblance of respect for basic human rights. Even Jordan’s King Abdullah ibn Hussein, touted as a hero for his newfound resolve to fight ISIS, oversees a government that has no freedom of the press and freely tortures dissidents. America’s support for these countries motivates a large number of disillusioned locals to join groups like ISIS that promise a different world order under the banner of religion.

Beyond the basic elements that pull supporters into their orbit, ISIS has shown considerable political savvy in advancing its aspirations. It brilliantly made an alliance with the secular Iraqi Baathists (including former soldiers, civil servants, and ordinary civilians) that were thrown out of their jobs in the early stages of the U.S. invasion. These Baathists provide ready-made organizational skills, military prowess, and knowledge of the Arab world.

There is no sound-bite solution to the Middle East. The issues are too complex, with far too many moving parts. President Obama’s remarks at the closing session of a recent summit against extremism hinted at the reality of the situation: “If we’re going to prevent people from being susceptible to the false promises of extremism,” he said, “then the international community has to offer something better.” But bombing Iraq and Syria will not solve the problem of ISIS. Neither will putting tens of thousands of American boots on the ground. On the contrary, these actions could potentially add fuel to the fire.

Working with Muslim communities in Western nations to identify issues that could lead some disillusioned members to join terrorist groups would be a worthwhile start. But what are we going to do with the simmering resentment in the Middle East over colonialism, invasions, bombing, and torture?

This anger isn’t going away anytime soon. But unless we begin an honest effort to address it, ISIS — and movements we cannot yet foresee — will continue to use these issues as ammunition. Sadly, the hostile political environment in Washington doesn’t give the president much space to honestly discuss these issues without being labeled as anti-American or some other nonsense.

The muscular arms of ISIS are pulling thousands into its fold and the results are horrific. We need to acknowledge that this nihilistic movement has appeal for a reason and begin to address these issues before the blowback blows us farther than we could imagine.