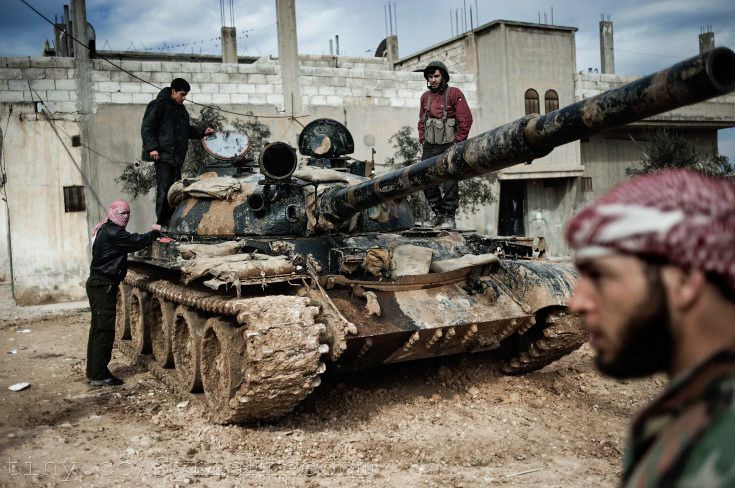 Obama's recent decision to attack ISIS in Iraq and follow it into Syria is the latest act in an ongoing tragedy. (Photo: Freedom House / Flickr)

There's no better time for Sunni and Shia to sit down together and address not just ISIS but the injustice, intolerance, and inequality that birthed it.
By John Feffer | February 11, 2015

During the Cold War, science fiction writers and politicians like Ronald Reagan imagined that the threat of an invasion from outer space could break down ideological barriers and unify the world. The arrival of giant bug-eyed creatures bent on death and destruction would prompt world leaders to set aside their petty rivalries for the higher purpose of saving the planet.

As it turned out, the Cold War and the immediate risk of nuclear annihilation disappeared without alien intercession. Since that time, other divisions and rivalries have replaced the East-West schism. And other substitutes for an alien threat have appeared as well, such as climate change and global pandemics. But world unity has yet to emerge out of the fractiousness of everyday geopolitics.

The latest candidate for world unifier is the Islamic State (or ISIS). Although many commentators have described ISIS as somehow less-than-human, it doesn’t come from outer space. It is decidedly a homegrown product of the turmoil that has engulfed two states: Iraq since the U.S. invasion in 2003 and Syria since the aborted Arab Spring uprising that began in 2011.

ISIS has made a name for itself by killing just about everyone: American NGO workers, Japanese journalists, members of minority communities in Iraq. It doesn’t hesitate to kill Muslims either. As an organization of Sunni extremists, for instance, ISIS has specifically targeted Shiites, whom it considers apostates. But ISIS has also killed its own Sunni jihadi mercenaries if they have second thoughts about their mission and want to go home.

Cults and criminal syndicates can be similarly ruthless. But at the level of global affairs, there hasn’t been anything like ISIS since Genghis Khan left immense piles of skulls outside conquered cities and dared the world to gang up against his Mongol horde. Even Hitler and Stalin signed agreements and formed alliances of convenience, if only to ignore them later on. But Genghis Khan didn’t negotiate. The only word in his diplomatic vocabulary was capitulation. So too with ISIS and its dream of a caliphate of the oppressed.

Recently ISIS has been in the headlines again for burning alive a Jordanian air force pilot who participated in bombing raids over its territory. In response, the Jordanian government has vowed to wipe ISIS off the face of the earth.

Jordan is not the only Muslim country participating in the anti-ISIS coalition. The Gulf States, Egypt, and Turkey have all signed on. Defeating ISIS is also one of the few items on which Saudi Arabia and Iran can agree. And despite seemingly irreconcilable differences on a broad range of other issues, the United States, Syria, and Russia are all on the same page when it comes to ISIS.

In short, as an organization that targets nearly everybody, ISIS should not be surprised that it has had this unifying effect on the world. There are, of course, some individuals who continue to support ISIS. It has attracted foreign mercenaries and inspired affiliates in other countries such as Libya. Some money and arms flowed to ISIS initially from Qatar and Saudi Arabia, particularly from private funders. But both countries appear genuinely appalled by what the group has done in the name of Sunni Islam.

The case of Saudi Arabia is illustrative. As Patrick Cockburn writes in his excellent new book The Rise of the Islamic State, “During February and March 2014, in an abrupt reversal of previous policy, Saudi Arabia sought to stop Saudi fighters departing for Syria and called on all other foreign fighters to leave that country. King Abdullah decreed it a crime for Saudis to fight in foreign conflicts.” At roughly the same time, the Saudi government installed a new intelligence chief, Mohammed bin Nayef, who had previously established a reputation for his programs of de-radicalization and counterterrorism.

The world is obviously taking ISIS very seriously. But must taking it seriously translate into a concerted military campaign to “degrade and destroy” the movement, as the Obama administration has promised?

The Rise of ISIS

There are a number of interesting conspiracy theories about the rise of ISIS.

In the introduction to Syrian Notebooks, a diary of his time with the Syrian opposition in early 2012, the writer Jonathan Littell speculates that the Assad regime directly helped cultivate the rise of ISIS to destroy the moderate opposition. He writes that Assad ordered the release of jihadists in spring 2011 and didn’t initially bomb areas controlled by ISIS. He goes on to cite other examples of the cynical manipulation of religious extremists by Russia (in Chechnya), Israel (with Hamas), and the United States (Afghan mujahedeen) to emphasize the point.

Of course, the release of jihadists was part of several general amnesties that Assad ordered in 2011 to appease the opposition. He may very well have hoped to sow dissension among the ranks of the opposition without necessarily expecting the extremists to forge a distinct faction of their own. Later rumors of energy deals between Damascus and both ISIS and the al-Qaeda affiliate Jabhat al-Nusra suggest opportunism rather than an effort to prop up the jihadis. Whatever plans Assad might have had for ISIS at the beginning, he is now determined to eliminate the group.

The unhappy truth is that ISIS is not Assad’s creation. Rather it is a product of U.S. intervention from the outside and sectarian rivalries on the inside.

U.S. forces hammered away at a wide range of adversaries during the Iraq War. Those who survived, in true Darwinian fashion, were best adapted to carry on the fight. One of those survivors, ISIS founder Abu Bakr al-Baghdadi, also spent time in a U.S.-run detainment facility in Iraq where he may well have been radicalized.

Meanwhile, the government that the United States installed in Baghdad systematically tilted the playing field in favor of the Shiite majority. That bias mirrors the situation in Syria where a Shiite minority (in the form of the Alawite sect) rules the country. A Sunni backlash in both countries — and ultimately in a cross-border alliance — was inevitable.

The other factor in the rise of ISIS was the painful reality that the Iraqi army barely existed. This was not despite huge injections of U.S. funds but because of it.

“The army became a money-making machine for senior officers and often an extortion racket for ordinary soldiers who manned the checkpoints,” Cockburn writes. Ten years of U.S. arms and training to the tune of $25 billion vanished into people’s pockets and overseas bank accounts. How else to explain how 1,300 ISIS fighters vanquished a government force of 60,000 to take over the city of Mosul last June?

It’s a cautionary example as the United States contemplates pouring more arms into Syria, sending lethal aid to Ukraine, and providing assistance to other hot spots around the world. “The Iraq experience underscores the fact that the United States often has little control over how its arms and training are ultimately used,” William Hartung writes. As for ISIS, Cockburn notes, it was always happy when arms flowed to anti-Assad forces because it could siphon off those munitions through “threats of force or cash payments.”

The Response to ISIS

When it was seizing territory at a rapid rate last year, ISIS seemed unstoppable. Residents of Baghdad braced for an attack on the capital city. The Kurds worried about incursions to the north. ISIS even set its sights on claiming the holy sites of Mecca and Medina in Saudi Arabia, an essential territorial gain for any caliphate worth its salt. In response, Saudi Arabia has built a 600-mile wall-and-ditch to protect itself from incursions from neighboring Iraq.

More recently, however, ISIS has come up against some challenges.

In Syria, it lost the besieged city of Kobane to a combination of air strikes and Kurdish peshmerga fighters. The battle resulted in the death of as many as 2,000 ISIS fighters. Air strikes have killed as much as 30 percent of the total ISIS force of 30,000. The jihadists have fallen back from the area northeast of Baghdad, giving the capital a bit more breathing room, and Iraqi government forces appear to be gearing up for an effort to retake Mosul. In all, ISIS has lost about 700 square kilometers, which isn’t much — about 1 percent of its total territory — but at least it’s no longer expanding.

There are some voices urging the United States to team up with Syria to fight ISIS. That’s a difficult pill to swallow.

For all the cruelty of ISIS, it has killed a relatively small number of people compared to the regime in Damascus. The Syrian Network for Human Rights estimates that the Assad government is responsible for killing over 100,000 civilians since 2011. The death toll in the conflict has now reached over 200,000 people. It’s one thing to give up on the idea of ousting Assad — which is bowing to the unpleasant reality of his political survival — but to actively cooperate with the dictator is realpolitik at its most distasteful. (Negotiating a peace settlement with him, however, is a different matter).

It’s another variety of madness to assume that a U.S.-led bombing campaign is going to eliminate ISIS. Washington presided over a much more thorough effort to change the facts on the ground in Iraq — with bombs and troops and billions of dollars in aid — and it has in the end produced only a failed state (Iraq), a barbaric state (ISIS), and a state of utter chaos (in the larger region). So why should a scaled-back version of the above have any greater success in eliminating ISIS?

Alas, ISIS has proven that there is always something worse lurking out there if you don’t address the underlying reasons for the anger and resentment — a Putin behind a Yeltsin and a Zhirinovsky behind them both, an al-Sisi behind a Morsi, and probably a military dictatorship behind Kim Jong Eun.

And yet, for all its horror, ISIS provides the world with the same opportunity that 9/11 did.

When virtually the entire Middle East agrees on something, it’s a planetary alignment of epochal dimensions. The United States must learn from the mistakes of 9/12 and not waste this global unanimity on something so medieval as a campaign of revenge killings. It must rise to the occasion. The first step is to conclude a deal with Iran on its nuclear program and use that agreement as a springboard for convening a regional peace process that involves both Iran and Saudi Arabia and addresses the underlying grievances in Iraq and Syria.

There’s no better time for Sunni and Shia to sit down together and address not just ISIS but the injustice, intolerance, and inequality that birthed it. The threat of Soviet communism pushed longstanding adversaries together in Europe after World War II. Perhaps the threat of ISIS can do the same for the Middle East. Until the day when those space aliens arrive with laser guns blazing, we won’t have a better opportunity.