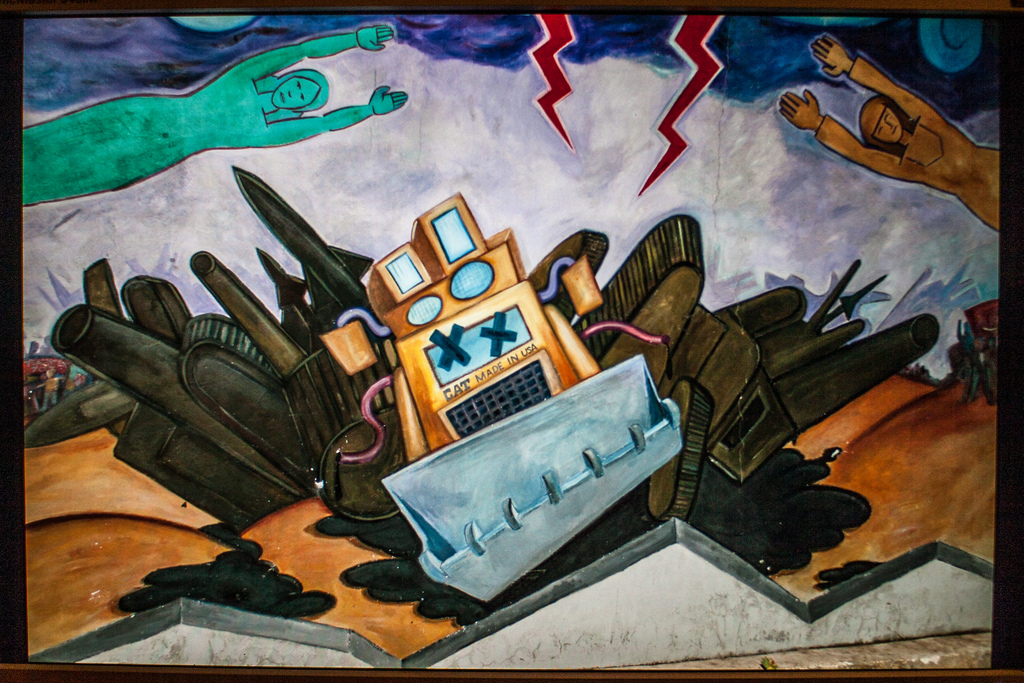 Palestinians should not lend their name to a charade of endless negotiations while historic Palestine disappears.
By Adil E. Shamoo | November 25, 2013

Israeli Prime Minister Benjamin Netanyahu wants negotiations with the Palestinians to continue for decades to come. But the Palestinian leadership would be foolish to go along with this charade.

When I was a child in Baghdad, we had a special Assyrian holiday for kids called Nusardil. As part of the celebrations, everyone throws water at each other, symbolizing baptism. The goal is to run away quickly enough to avoid getting wet.

It’s time for a change. It’s time to let negotiations go, and find other means of achieving Palestinian rights and statehood.

The situation for Palestinians has reached dire straits.

Palestinians suffer from lack of sovereignty, lack of resources, and abject poverty. A million and a half Arabs live as second-class citizens in Israel. Another 1.5 million suffer in an open-air prison in Gaza, and 2 million more live under occupation in the West Bank—an occupation maintained with the help of the United States and the collaboration of a Palestinian government.

Meanwhile, the Israelis are riding high. The United Nations classifies Israel as having “Very High Human Development”—it ranks 16th among 186 nations. With a very strong military, Israel has little to fear in terms of external attacks, particularly with its undeclared nuclear arsenal. Despite some nominal differences over settlements, the U.S. president and members of Congress from both parties, many of them insisting that the West Bank isn’t even under occupation, repeatedly reiterate their ongoing support of Israel.

For their part, the Palestinians are divided and fighting among themselves. The Palestinian Authority, with its leaders serving on long past their term limits, is illegitimate. Reliant on foreign assistance and Israel’s willingness to let its funds through, the Authority complies with U.S. policies to gain access to a measly few hundred million dollars a year. Meanwhile, regional support has been slim as Arab countries have dealt with their own internal strife.

Lacking progress on any other front, all eyes turn toward negotiations, which have recently re-started under the guidance of U.S. Secretary of State John Kerry.

Despite the fact that the broker in these negotiations—the United States—is on the side of Israel on nearly every major question, the Palestinian leadership still hopes for the best. It wants an agreement that will stop settlement building, send Israel back to its 1967 borders, establish East Jerusalem as the capital of Palestine, enact the right of return or compensation for Palestinian refugees and their descendants, and enable Palestinians to run their own affairs.

In contrast, right-wing Israeli politicians—many of them in the leadership of Netanyahu’s government—are floating the idea of not creating a Palestinian state at all. Rather, they propose annexing the most important portions of the West Bank—leaving many Palestinians permanently stateless in an overtly apartheid arrangement—and making Jerusalem a permanently undivided city for Israelis only.

The two sides are not exactly close together. And while the Palestinian leadership lacks the legitimacy to compromise anymore than it already has, the Israeli leadership lacks any incentive.

The push for negotiations is spurred forward by a cottage industry of foreign policy professionals who still believe that Washington has not only the ability but also the willingness to negotiate a just and acceptable settlement. The negotiation industry, at times backed by very well-intentioned people, keeps the drumbeat of hope alive and says that talks are preferable to what it claims is the only other alternative: war.

Palestinian leaders, along with most everyone else in the region, seem to agree that there will be no military solution to the conflict. But the alternative to war is not necessarily negotiations — not if it means negotiating while the Israelis openly confiscate Palestinian land by settling over half a million Israelis on it. Or negotiating despite the fact that the majority of both Palestinians and Israelis have little faith that this round of talks will succeed.

It’s time for the Palestinians to make sure they do not aid in perpetuating this charade of endless negotiations for decades more.

The status quo is unsustainable, and when the United States is no longer a superpower, Israel’s impunity will be much less assured. As Ian Lustick stated recently in the New York Times, “many Israelis see the demise of the country as not just possible, but probable. The State of Israel has been established, not its permanence.” Lustick reminded the Israelis that the “Soviet, Pahlavi Iranian, apartheid South African, Bathist Iraqi, and Yugoslavian states unraveled,” and so too could Israel collapse under the weight of its own injustices.

In the meantime, what are the options?  For one thing, the Palestinians can exercise peaceful demonstrations, engage in hunger strikes, and use international forums to further isolate Israel.

Meanwhile, the Israelis may be doing a fine job of isolating themselves: the United States is almost the only friend Israel has, and Israel is abusing the friendship. Netanyahu’s government wants to go to war with Iran and has been pressing Washington hard to do the same, contrary to U.S. interests. That move risks alienating Washington and eroding one of Israel’s chief pillars of support, although this is unlikely to happen anytime soon.

The Palestinians are at an important juncture in their history. Through nonviolent resistance and further appeals to international law and institutions—not through a hollow “negotiation” process that puts a veneer of legitimacy on the slow erosion of historic Palestine—the Palestinian struggle for statehood must continue.

On the home front, Palestinians need to get rid of Mahmoud Abbas and the coterie of other leaders who are jaded by their comfort. And they should redouble their efforts to enlist world opinion by exposing Israel’s virtual enslavement of 5 million Palestinians, which is contrary to the Universal Declaration of Human Rights and an anathema to the world conscience in the 21st century.

Adil E. Shamoo is an associate fellow of the Institute for Policy Studies, a senior analyst for Foreign Policy in Focus, and the author of Equal Worth – When Humanity Will Have Peace. He can be reached at ashamoo@som.umaryland.edu .