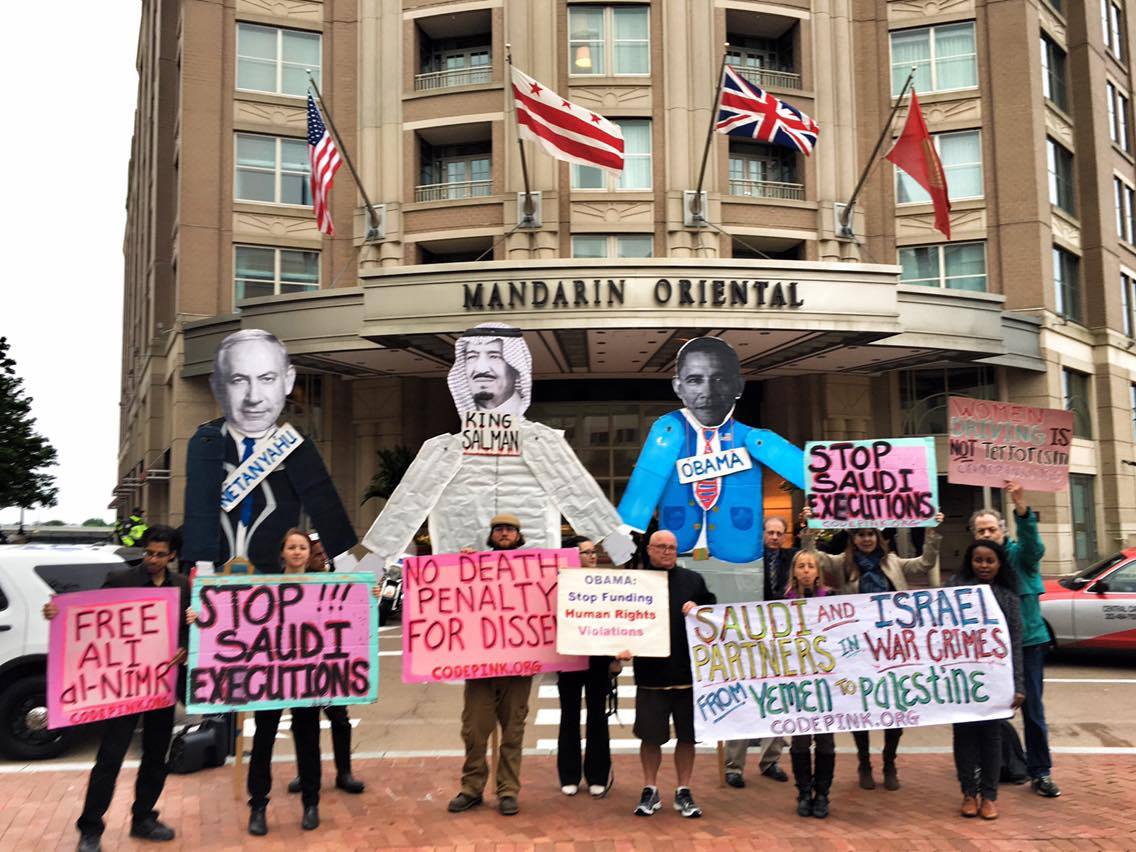 Israel and Saudi Arabia are burying the hatchet. For at least 10 reasons, that's not such a good idea.
By Medea Benjamin | May 18, 2016

On the surface, it would seem that Saudi Arabia and Israel would be the worst of enemies — and indeed, they’ve never had diplomatic relations.

After all, the Saudis have championed the cause of the Palestinians, who are oppressed by the Israelis. Israelis say they’re besieged by Muslim extremists, and many of these extremists are motivated by the intolerant, Wahhabi ideology born and bred in Saudi Arabia.

But beneath the surface, these two old adversaries actually have a lot in common. In fact, in the contemporary Middle East, they’ve become the strangest of bedfellows.

Rumors about the budding relationship have been circulating for the past few years. In 2015, former Saudi and Israeli officials confirmed that they’d held a series of high-level meetings to discuss shared concerns, such as the growing influence of Iran in Iraq, Syria, Yemen, and Lebanon, as well as Iran’s nuclear enrichment program. Shimon Shapira, an Israeli representative who participated in secret meetings with the Saudis, put it this way: “We discovered we have the same problems and same challenges and some of the same answers.”

On May 5, former Saudi intelligence chief Prince Turki bin Faisal and retired Israeli Major General Yaakov Amidror spoke together at a Washington event hosted by The Washington Institute for Near East Policy — the policy wing of the pro-Israel lobby AIPAC. The event, broadcast live online, showed that Saudi Arabia and Israel have finally come out of the closet –– together.

Here are some traits Saudi Arabia and Israel have in common.

Both oppress the non-dominant groups living in their borders. Israel oppresses Palestinians, building settlements on their land and surrounding their villages with apartheid walls and heavily armed soldiers. Saudi Arabia has set up a political and judicial system that oppresses everyone who’s not Sunni (like Shiites and non-Muslims), as well as women and millions of migrant workers.

Israel and Saudi Arabia have each invaded neighboring lands, killing thousands of civilians. Israel has been recurrently invading and bombing Gaza since 2008. In 2014 alone the Israeli military killed 2,104 people — most of them civilians — and destroyed 17,200 homes and left 475,000 living in emergency conditions.

The Saudis have meanwhile interfered in the internal affairs of neighboring Yemen. In March 2015, they launched a vicious bombing campaign directed at Shiite rebels in the country. So far they’ve killed over 6,000 mostly civilian Yemenis. They’ve bombed markets, schools, hospitals, residences, and wedding parties, displacing over 2.5 million people.

Additionally, both use weapons that have been internationally banned: Israel used white phosphorus in Gaza, while the Saudis have used cluster bombs in Yemen.

Religion plays a key role in the politics of both nations.

Israel is considered the homeland for the Jewish people, and the Basic Laws of Israel that serve in place of a constitution define the country as a Jewish state. Jews get preferential treatment, such as the right to immigrate to Israel from anywhere and automatically become citizens, while Muslims face daily discrimination and are treated as second-class citizens.

In Saudi Arabia, Mecca is the holiest city for Muslims, and the Saudi kingdom considers itself the global center of Islam. Only Muslims can become Saudi citizens, and non-Muslims are treated like second-class citizens.

Both countries export “products” that promote violence. Israel is a major exporter of weapons, and Israeli forces often train police in other countries — including the United States — in repressive techniques. The Saudis export the extremist Sunni ideology called Wahhabism all over the Middle East and North Africa. Wahhabism is the ideological basis of al-Qaeda and the Islamic State.

More than anything else, it’s a shared hatred of Iran that’s bringing these adversaries together. Both view Iran as an existential threat and fear Tehran’s growing influence in the region. They both opposed the Iran nuclear deal that was such a great win for diplomacy over war, and they share a determination to stop the United States from getting any closer to Iran.

Both nations supported the military coup in Egypt, led by General Adbul Fattah el Sisi, which overthrew a democratically elected government and led to a brutal wave of repression that put 40,000 dissidents in prison. The Saudis have stepped in with billions of dollars to fill the Sisi regime’s coffers, and Egypt has collaborated with Israel in Israel’s continued siege of Gaza.

Both Israel and Saudi Arabia are more concerned with overthrowing the Syrian regime of Bashar al-Assad (who’s aligned with Iran) than defeating the Islamic State. To that end, they’ve been supporting extremist groups in Syria like the Nusra Front, which is an al-Qaeda affiliate.

The Saudis have sent weapons and money to Nusra. For its part, Israel has been treating wounded Nusra fighters in Israeli hospitals and then sending them back to battle the Syrian army. Israel also killed Lebanese and Iranian advisers who were assisting Assad’s government in fighting against Al Nusra. 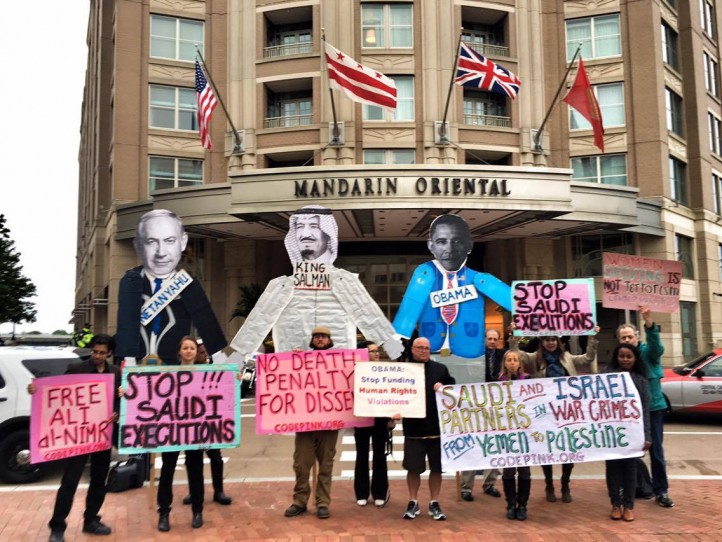 Both nations lock up thousands of political prisoners, including minors. In February 2016, Israel had 6,204 Palestinians in prison, 438 of them minors. Many of the minors are imprisoned for throwing stones at Israeli soldiers. The Saudis have beheaded minors, and presently have three prisoners facing execution who were arrested as juveniles for nonviolent protests.

They both spend many millions of dollars to influence U.S. policy.

The Israeli government enjoys the backing of the American Israel Public Affairs Committee, which is often considered the most influential foreign policy lobby group in the United States.

The Saudis have just started their own version called SAPRAC, or the Saudi American Public Relations Affairs Committee. For years they’ve been buying influence by contracting influential public relations and law firms like the Podesta Group and donating to the Clinton Foundation, the Carter Foundation, and dozens of think tanks and Ivy League universities.

Finally, both countries are long-time allies of the United States. Subsequent U.S. administrations have supported Israel since its founding in 1948; they’ve also supported an array of Saudi kings since the founding of that nation in 1932.

The U.S. has helped guarantee the security of both nations. U.S. taxpayers give over $3 billion a year to support the Israeli military, the U.S. military guards the Persian Gulf for the Saudi royalty, and Saudi Arabia is the No. 1 purchaser of U.S. weapons.

Some say it’s good for Israel and Saudi Arabia to bury the hatchet and find common ground. But peace in the Middle East won’t be furthered by the causes they’re collaborating on.

Instead, Israel has to make peace with the Palestinians, and Saudi Arabia has to come to terms with Iran. Otherwise, Saudi-Israeli collusion will only be a fatal embrace that causes more heartbreak for the region.

Medea Benjamin is the co-founder of the peace group CODEPINK and the human rights organization Global Exchange. She is the author of a forthcoming book about Saudi Arabia entitled The Unjust Kingdom and is the author of Drone Warfare: Killing by Remote Control.