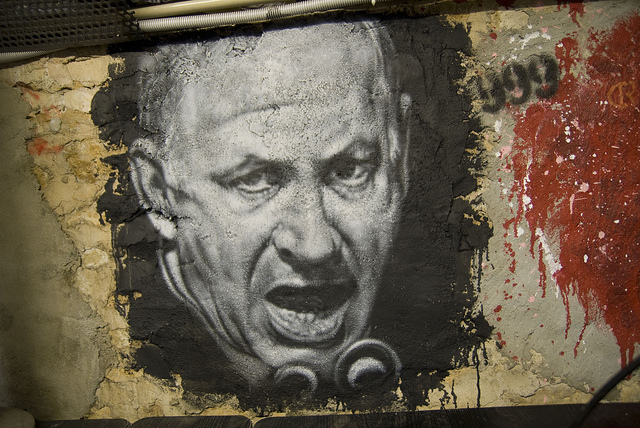 Israel on the Sidelines

Israeli Ambassador Michael Oren recently spelled out quite clearly for MSNBC’s Andrea Mitchell his government’s attitude toward possible new openings in relations between the United States and Iran.

Mitchell had asked him: “What is Israel’s posture towards this opening with Iran? Short of shutting down all of its nuclear facilities, is there a step-by-step process that is possible? Should there be bilateral talks with the United States?”

Talks between the two countries could be a positive thing, Oren replied, on one condition: Iran’s capitulation. The Iranians must “stop enrichment of uranium,” “ship out their stockpile,” and then “shut down the nuclear facility underground. Let them do all that and then let them sit down and talk,” he said.

Of course, that’s not about to happen.

(Actually, it takes some cheek for the Israeli government to demand that the Iranians roll over as a prerequisite for talks, considering that when it comes to negotiations with the Palestinians, the Israelis insist that negotiations commence without any preconditions.)

The Netanyahu government appears to be caught in a bind. The recent flurry of diplomatic activity that could result in ridding neighboring Syria of chemical weapons threatens to open a Pandora’s Box on which Israel would prefer to keep a lid. If the “international community” can persuade the Assad regime to forfeit weaponry it contends it holds as a deterrent, then inevitably questions will arise about Israel’s possession of both chemical and nuclear weapons of mass destruction.

If Syria were to ratify and abide by the international Chemical Weapons Convention (CWC), there would be no logical reason for the international community not to insist that Israel do so as well. As a recent editorial in the Israeli daily Haaretz put it, “it would be a pity if in the future Israel finds itself in the position of Syria—forced to sign the convention under international pressure.”

This would be embarrassing indeed. Aside from Syria and Israel, only Egypt, Angola, South Sudan, North Korea, and Myanmar have yet to sign the convention.

In turn this would most likely direct attention to the proposed Mediterranean nuclear-free zone, which would directly confront Israel’s seldom acknowledged nuclear arsenal. A recent report in the Bulletin of the Atomic Scientists estimated Israel’s nuclear stockpile at 80 warheads, though the country has the capacity to produce many more.

Weaponry aside, it is widely recognized that behind the civil war raging in Syria, a multifaceted struggle is underway to alter the military and political balance of force in the region.

However, Tel Aviv quickly rebuked its diplomat, with Netanyahu’s office declaring that Oren’s comments do not represent the prime minister’s position. “Israel’s policy has not changed, and we are not intervening in internal Syrian affairs.” According to Algemeiner.com, “Israeli officials have repeatedly said that the country has no interest in becoming involved in Syria’s civil war, and Netanyahu has repeatedly instructed his Cabinet and others representing the government to remain silent on the issue.”

“On other issues, Oren – who has contact in Washington with some ambassadors from Persian Gulf countries – said that that ‘in the last 64 years there has probably never been a greater confluence of interest between us and several Gulf States. With these Gulf States we have agreements on Syria, on Egypt, on the Palestinian issue. We certainly have agreements on Iran. This is one of those opportunities presented by the Arab Spring.’”

Oren will soon be replaced by Netanyahu confidant Ron Dermer.

Meanwhile, Netanyahu is hard at work pressing his case to Obama and reprising his warnings to the UN General Assembly about Iran’s alleged nuclear weapons program. “But this time,” notes the Financial Times, “he risks being upstaged by Mr. Rouhani,” whose overtures to Washington have captured the headlines.

A strong counterpoint to Ambassador Oren’s call for Iran to partially disarm itself before any negotiations can begin was offered September 20 by Financial Times Associate Editor Philip Stephens. He wrote that the efforts to resolve the question of Iran’s nuclear program “has lacked two vital ingredients: the first is recognition of Tehran’s fear that the US wants regime change – probably the main driver of the nuclear program; the second is an offer of an everything-on-the-table dialogue reaching beyond the nuclear issue to a normalization of relations.”

“Negotiations, of course, would not carry a guarantee of success,” continued Philips. “But, bombing or no bombing, it should be clear by now that Tehran will not give up the right to a civilian nuclear program. Sanctions have hurt, but they have also proved Iran’s resilience. The discussion that matters is about whether it will choose to cross the threshold to become a nuclear weapons state.”

With high-level meetings between U.S. and Iranian officials set to occur, perhaps some of these issues can be hashed out—while Israel sits on the sidelines.

FPIF columnist Carl Bloice, a member of the National Coordinating Committee of the Committees of Correspondence for Democracy and Socialism, is a columnist for the Black Commentator. He also serves on its editorial board.