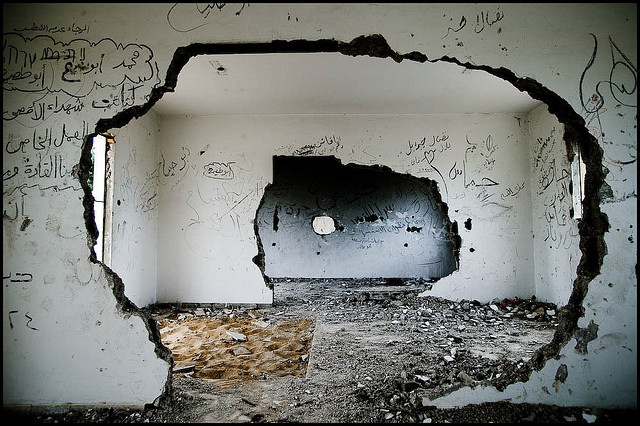 Israel’s Operation in Gaza: Terrorism by Any Other Name

Terrorism is defined by Merriam Webster’s dictionary as: “the use of violent acts to frighten the people in an area as a way of trying to achieve a political goal.” One could say Hamas fits this definition out of desperation and a lack of moral leadership.

But Israeli actions toward Palestinians are much worse: Israel is politically and strategically determined to subjugate the Gazans through fear. They do this through commando raids, mass arrests, and air strikes – all with the most sophisticated army Tel Aviv and its U.S. partners can buy. It has not gone unnoticed by all. On July 15, Turkish Prime Minister Recep Tayyip Erdogan called the current Israeli air offensive in Gaza, “state terrorism” against the Palestinians.

It’s been 66 years since the Palestinians’ land was confiscated. For Gazans, most of those decades have been spent under Israeli occupation. Since the withdrawal of the Israeli army from Gaza in 2005, Palestinians have lived in a virtual open-air prison, as Israel enforces a strict blockade and travel ban by air, sea, and land. For a time, the only means of free movement for Gazans was across the Egyptian border, but new Egyptian President Gen. Abdul Fatah al-Sisi closed the border a year ago after the coup he helped to engineer. Meanwhile, any misbehavior, as defined by the Israelis, is met with severe punishment – including air raids – all taking place in an urban population of 1.8 million people penned into 141 square miles of land.

The current crisis began several weeks ago with the kidnapping and murder of three young Israelis. It was a heinous crime, and its perpetrators should be punished. The Israelis responded by stepping up the raids and arrests in Gaza that had been ongoing since the teens were lost. After their bodies were found, a young Palestinian was kidnapped by Israelis, stabbed and burned alive. Days later, three Israeli police personnel arrested an American teenager visiting his Palestinian relatives in Israel. The Florida native was beaten by the three officers’ mercilessly and kept in jail for several days. Throughout this time, Hamas and other militant organizations have been lobbing primitive and largely ineffective rockets daily into Israel to terrorize the population. They’ve been met with precision bombing by the Israelis, who have killed – as of press time – more than 220 Palestinians, mostly civilians, according to the United Nations, including four young boys killed on Gaza’s seaport beach Thursday.

The worst seems yet to come as Palestinians have been warned to leave their homes to escape further targeting of their neighborhoods. Israeli Prime Minister Benjamin Netanyahu and his military are continuously reviewing and planning the ultimate blow to Hamas. This isn’t the first time: in 2008 and 2009, the Israelis carried out the slaughter of Palestinians in similar fashion, killing an estimated 1,166 and wounding over 6,000 in “Operation Cast Lead.” Israel sustained a total of 13 fatalities. Mr. Netanyahu and his right wing supporters in Israel and in the United States are looking for any opportunity to “mow the lawn” and finish off Hamas for good, while Hamas and other, more extreme groups, are more than happy to provide the heartless Netanyahu another excuse to do it.

If unchecked, U.S. policy, and its enduring silence in the face of this lopsided conflict will be a serious stain on American moral standing. Over 220 dead and 1,600 wounded, compared to one Israeli dead and a dozen wounded (as of press time), is disproportionate and no accident – it’s systematic. I have written several times that the right wing Netanyahu is not interested in a two state solution as he claims, but rather endless occupation until the Palestinians die, starve, or leave the area. Israel is willing to wait decades and centuries until that goal is accomplished. With few exceptions such as The New York Times columnist Roger Cohen, when will the American media wake up from the moral abyss? There are more honest discussions of this conflict in the Israeli press than in the United States. The American media’s attitude towards Palestinians is emblematic of their bigotry towards Muslims in general. If the same number of Europeans, Israelis, or Americans had been killed by foreign bombs, their reaction would be strident and clear, no doubt followed by the kind of immense public reaction we witnessed after 9/11.

Unfortunately, Hamas leaders and other groups are acting selfishly, heedless of how their actions will blow back on the people. Most recently they rejected an Egyptian proposal for ceasefire and continued to launch rockets into Israel instead. Netanyahu, who supposedly had agreed to ceasefire, answered Hamas by bombing again. It was a nihilistic stand by Hamas. Above all, resistance and revolutionary movements must be moral in order to garner broad appeal internally and externally. The moral basis of their actions must be what differentiates them from their oppressor. Hamas and the militants purporting to defend the people are instead failing them on this score.

Israel, in the meantime, would like peace with the Palestinians as long as they do not threaten the power and prosperity of Israel. In essence, Israel wants to achieve what every invading army wishes to achieve — attaining the best for the colonizers and the crumbs for the subjugated people. Israel’s army can go anywhere in Gaza and the West Bank at will. Israel controls flow of money, food, medicine, water and electricity to the Palestinians. Also Israel can arrest, torture, and kill Palestinians, which it has been doing, with gusto.

For Israel, the time will come when its remaining supporters in the U.S. government and establishment media will label Israel’s actions, if continued, as terrorism. It is already happening across the rest of the world including Europe. For the suffering Palestinians trapped in Gaza with nowhere to hide, this broader acknowledgment could not come soon enough.