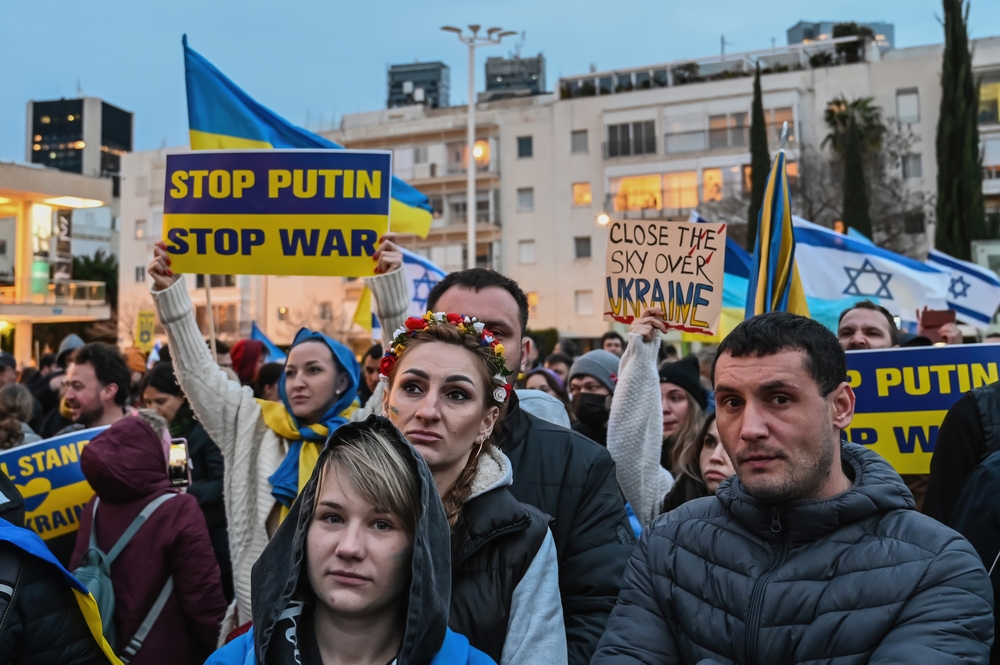 Rally in support of Ukraine in Tel Aviv (Shutterstock)

So much for conspiracy theories about Jews controlling the world. We can’t even get together to control the outcome of the war in Ukraine.
By John Feffer | January 25, 2023

There are currently only two Jewish heads of state in the world. The first, not surprisingly, leads Israel. The second is Volodymyr Zelensky, the president of Ukraine.

They don’t get along.

Religious affiliation by itself does not determine political or military alliances. Plenty of wars have pitted Christians against Christians and Moslems against Moslems. But there are only about 15 million Jews in the world. Especially in the post-Holocaust era, Jewish communities have generally stuck up for one another. Think of American Jews rallying in support of Soviet refuseniks during the Cold War or the huge number of Ethiopian Jews welcomed in Israel (though not always with completely open arms).

Zelensky has certainly played up this natural affinity in his efforts to acquire military weaponry from Israel. He has spoken several times to Israeli audiences, including an impassioned speech to the Knesset.

But Zelensky’s relationship with former Prime Minister Naftali Bennett was not especially close and took a turn for the worse when Bennett privately reprimanded Zelensky for publicly pressuring him for more aid. When Israel refused to provide Ukraine with its Iron Dome air defense system, in the face of Russia’s brutal aerial assault on Ukrainian infrastructure, Zelensky couldn’t contain his frustration in an interview with French TV: “You know there are many people in Ukraine of Jewish origin, and there are a lot of Ukrainians in Israel. How is it possible to have this attitude? I was shocked.”

All of Israel’s allies in the West have rallied behind Ukraine. Meanwhile, even as it claims to be fighting Nazis, Russian leaders have made outlandish, anti-Semitic claims, like Sergei Lavrov’s fake news statement back in May that Hitler, too, had Jewish origins and the Russian foreign minister’s more recent comparison of Western strategy in Ukraine to Hitler’s “final solution.” And, of course, Russian attacks have killed real Jews, including Boris Romantschenko, a 96-year-old survivor of four Nazi concentration camps who died when a Russian missile destroyed his apartment building in Kharkiv last spring.

So, why on earth has the world’s only Jewish state failed to support the only other country with a Jewish leader? So much for conspiracy theories about Jews controlling the world. We can’t even get together to control the outcome of the war in Ukraine.

The Return of Netanyahu

Ordinarily, power is attracted to power. How else to explain why authoritarian leaders seem to flock together, regardless of political ideology.

It must be the pheromones.

Donald Trump was so enamored of his “love letters” from North Korean leader Kim Jong Un that he breached national security to abscond with them after his term in office ended. Several prominent far right-wing politicians—Matteo Salvini of Italy, Marine Le Pen of France—couldn’t wait to kiss the ring of Russian leader Vladimir Putin, despite his background as a communist apparatchik.

So, too, has Benjamin Netanyahu spoken of his close relationship with Putin. Back in 2021, Bibi asked the Russian leader to help out with an Israeli woman detained in Syria. “I spoke twice with my friend Russian President Vladimir Putin,” Netanyahu reported. “I requested his assistance in returning her, and he acted.”

Of course there are much larger geopolitical reasons for the close relations between the Kremlin and the Jewish state. The Israeli government depends on the good graces of the Russian military, which effectively controls the airspace over Syria, to monitor what’s going on near the Israeli border and to bomb Iranian positions over the border. Israel has also in the past relied on Russian channels to Palestinian groups, particularly Hamas.

For these reasons, Israel has condemned Russia for its invasion of Ukraine but hasn’t enforced the sanctions against the Kremlin or supplied any military assistance to Ukraine. That might change under Netanyahu, but only if Ukraine sides more explicitly with Israeli policy in the Occupied Territories.

One day after he took office late last month, Netanyahu called Zelensky with a specific request. The UN General Assembly was voting on whether to authorize the International Court of Justice to issue a report on Israel’s occupation of Palestinian land. Netanyahu wanted Ukraine to vote against the resolution or at least abstain. In return, he promised to reconsider the provision of the Iron Dome system to Ukraine.

Disappointed that Bibi hadn’t provided a more concrete quid pro quo, Zelensky retaliated by instructing his UN representative not to attend the vote. This gap between Israel and Ukraine is not unbridgeable. But it would be a supreme irony if Ukraine managed to get an air defense system from Israel only by supporting the latter’s illegal occupation of Palestinian land.

Since the invasion of Ukraine last February, more than 20,000 Jews have left Russia for Israel. Thousands of others have gone to other countries. A community that numbered around 165,000 before the invasion is rapidly shrinking.

Last month, one of the more prominent Jews to leave Russia, former chief rabbi Pinchas Goldschmidt, urged the rest of the community to rush to the exits. “We’re seeing rising antisemitism while Russia is going back to a new kind of Soviet Union, and step by step the iron curtain is coming down again,” he told The Guardian. “This is why I believe the best option for Russian Jews is to leave.” Goldschmidt himself left because he wouldn’t succumb to government pressure to support the war.

The Jewish community in Ukraine, meanwhile, has mobilized to defend the country. It has repudiated Putin’s claims that the Russian army has come to save them from Nazis. “Before the war, we laughed at this,” comments Avraham Wolff, chief rabbi of Odesa and southern Ukraine. “We thought it was a joke. But now, it’s a very painful joke. It hurts. It’s impossible to say that Ukraine is full of Nazis. It’s wrong.”

In a 2018 Pew survey, only 5 percent of Ukrainians said they wouldn’t want Jews as neighbors, the lowest number in the region compared to 14 percent of Russians, 18 percent of Poles, and 23 percent of Lithuanians. Meanwhile, the influx of Ukrainian Jews fleeing Russian-occupied areas in the east has “created a miniature Jewish renaissance in Ukraine’s western regions,” according to The Jerusalem Post.

On the ground in Ukraine and Russia, in other words, Jews have made their choice clear.

During his most recently electoral campaign, Netanyahu promised to take another look at Israel’s refusal to offer military assistance to Ukraine. But given his relationship with Putin and the role that Russia plays in Israeli geopolitics, Bibi will not likely change the status quo in any substantial way.

After all, the Israeli prime minister is already busy with radical moves elsewhere.

The new Israeli government is the most right-wing yet, with several noted political extremists, a couple convicted criminals, and representatives of the ultra-Orthodox Shas, Religious Zionism, and United Torah Judaism parties. The head of a far-right, anti-LGBT party, meanwhile, will be in charge of “Jewish national identity.”

Top of the list of priorities for the new government is to press forward on not just expanding Jewish settlements in the Occupied Territories but effectively annexing Palestinian land. Several cabinet members come directly from the settler communities, like Itamar Ben-Gvir, the new national security minister who lives in a tiny settler outpost in the West Bank city of Hebron. The person in charge of settlement policy, Bezalel Smotrich, is himself an ultra-Orthodox settler leader.

To facilitate the makeover of Israeli society, Netanyahu has ambitions much larger than simply expanding Israeli territory at the expense of Palestinians. He has taken a page from the handbook of right-wing authoritarian leaders like Hungary’s Viktor Orbán by going after the independence of the courts. In recent years, Israeli courts have been the one government institution that has preserved the civil liberties of citizens.

On this issue, at least, the Israeli public is making itself heard: 110,000 people recently showed up in Tel Aviv for a third week of protests over Netanyahu’s plans to transform the judiciary into his lapdog. “Night is descending upon Israel,” former deputy attorney general Dina Silber told the protestors. “It’s a real alarm… We’re not imagining it.”

In other words, Netanyahu is busy turning Israel into Putin’s Russia: authoritarian governance combined with an ultra-conservative social policy and a colonial occupation of the “near abroad.” The early Zionists drew inspiration and support from the Soviet Union. Today, the right-wing in Israeli is following the example of a reactionary Russia.

Zelensky and Netanyahu may share the distinction of being Jewish leaders. But the Ukrainian should not expect much in the way of military help from Israel. Frankly, the latter is too busy heading in the direction of fascism to be much help in defending a democratic state from Putinism.