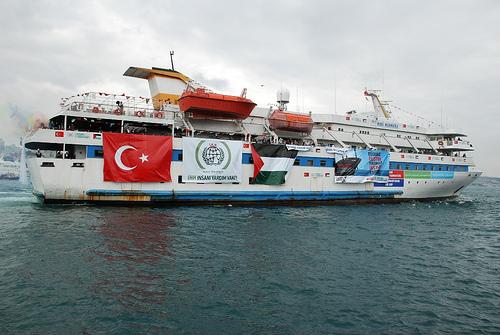 Israel has put together a committee to look into its recent flotilla attack. Is Washington's support for this less-than-independent inquiry a quid pro quo for Israel's reducing its blockade of Gaza?
By Stephen Zunes | June 24, 2010 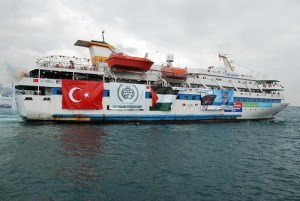 Few decisions of the Obama administration have outraged the peace and human rights community as much as its successful efforts to block an international inquiry into May’s Israeli aid flotilla attack. Instead, supported by leading Republican and Democratic members of Congress, the Obama administration has thrown its weight behind an investigative committee handpicked by right-wing Israeli Prime Minister Benyamin Netanyahu to examine the incident.

The three-member panel is not a full committee of inquiry as defined under Israeli law, so it does not have subpoena power or the ability to question Israeli soldiers. Nor can it compel anyone in the military to provide evidence. All the committee members can do is request documents and “summaries of operational investigations” that have already been conducted by the Israeli military itself.

The committee would not have the authority to even request testimony or other evidence “in regard to military personnel and personnel from the other security forces.” They would not be able to interview any soldiers or officers individually or even see their testimony or statements, instead relying only on “summaries” and other documents of internal military inquiries. These are generally done by officers who have no training in such inquiries on possible violations of international law. At most, the conclusions the panel gets will be lessons learned rather than any kind of investigation into possible criminal wrongdoing.

“Israel claims the panel is independent, but insists that it accept the military’s version of events,” said Sarah Leah Whitson, Middle East director at Human Rights Watch. “Given the Israel’s military poor record of investigating itself in past cases of possible wrongful death, it is hard to have confidence that the panel’s dependence on the Israeli military will lead to the truth.”

There are also questions regarding the committee’s makeup. None of the three members has any experience in this sort of inquiry. The committee is led by the conservative former Israeli Supreme Court Chief Justice Jacob Turkel, who has attacked credible international inquiries into Israeli violations of international humanitarian law. A second member is Amos Horev, a reserve Israeli major general and major figure in the Israeli military industrial complex. The third member is Shabtai Rosen, a 93-year-old law professor who was involved in the cover-up of the 1953 massacre in the village of Qibya when Israeli forces crossed into Jordanian territory, destroying 41 buildings (including the school) and killing 60 villagers.

The Obama administration and other supporters of Netanyahu have emphasized the presence of two foreign observes, Canadian Brigadier General Kenneth Watkin and Northern Ireland’s pro-British Unionist Party leader David Trimble. The news media has emphasized that Trimble won a Nobel Peace Prize for his role in the Good Friday peace accord. What they have largely failed to mention is that Trimble was also one of the key players — along with right-wing former Bush UN ambassador John Bolton and the conservative former Spanish Prime Minister Jose Maria Aznar — in a group organized late last month known as “Friends of Israel.” The initiative was launched, according to Trimble and the other sponsors, because of their concern about “the onslaught of radical Islamism” and outrage over the “unprecedented delegitimization campaign against Israel, driven by the enemies of the Jewish state and perversely assumed by numerous international authorities.”

Watkin has been implicated in a scandal, arising from the disappearance and torture of several detainees arrested by the Canadian Forces and turned over to Afghan security services. When called to speak before the Canadian House of Commons, he refused to answer questions about his role in authorizing the transfers despite knowledge of the likelihood of torture and other maltreatment of the prisoners.

UN Secretary General Ban Ki Moon noted how Netanyahu’s panel was “not sufficient enough to have international credibility.” The leading Israeli daily newspaper Ha’aretz, in its analysis of the probe, editorialized, “The government’s efforts to avoid a thorough and credible investigation of the flotilla affair seem more and more like a farce.”

By contrast, the Obama White House issued a statement praising the formation of the committee as an “important step forward,” insisting that “the structure and terms of reference of Israel’s proposed independent public commission can meet the standard of a prompt, impartial, credible and transparent investigation,” as called for by the UN Security Council. U.S. Deputy Permanent Representative to the UN Alejandro Wolff insisted, “We are convinced and support an Israeli investigation…and have every confidence that Israel can conduct a credible and impartial and transparent, prompt investigation internally.”

Congressional Democrats have defended the Obama’s decision to cover-up for the incident and prevent a credible investigation. Even though Human Rights Watch and Amnesty International have documented the failure of the Netanyahu government to investigate possible war crimes by its armed forces, Rep. Barney Frank (D-MA) recently insisted that “the Israeli government…has a very good record of holding the Israeli government to account,” and that “the Israeli government has a better record of legitimate self-criticism than almost any other government in the world.” Turning the consensus of international human rights organizations on its head, Frank argues that the only a group “commissioned by the Israeli government” would have credibility, while “clearly no inquiry chartered by the U.N. would have the credibility.” Other congressional Democrats have insisted that the right-wing Israeli government of Benyamin Netanyahu be entrusted with the investigation, including Brad Ellsworth (D-IN), Jesse Jackson, Jr. (D-IL), Rep. Sestak (D-PA), and Senate majority leader Harry Reid (D-NV).

All this comes in spite of a recent public opinion poll shows a clear majority of Americans — including 65 percent of Democrats — favor an international inquiry over allowing Israel alone to investigate the circumstances of the attack. It appears, then, that the Obama administration and its allies in Congress are committed to burying the truth and preventing Israel’s right-wing government from any culpability for its attack.

At the same time, however, the Obama administration’s acceptance of this whitewash might have been an explicit quid pro quo: The United States would defend the suppression of the truth in the Israeli attack in return for Israel substantially loosening the blockade of humanitarian goods. If true, this maneuver would be yet another case of Obama provoking the outrage of the left wing of his party in order to pursue a behind-the-scenes deal he believes will advance the greater good. Some analysts, like Marc Lynch, make a compelling case that such a trade-off is worthwhile, in terms of easing an enormous level of human suffering as a result of the four-year old-siege.

While tactically defensible, such a quid pro quo is strategically questionable. Given the Israeli government’s history of reneging on its various international commitments, there are questions as to how comprehensive this lifting of the blockade actually may be and how long it will last. It would also mark yet another bad precedent of the United States effectively granting an ally a license to get away with violating international humanitarian law and other illegal activities, thereby further weakening the international legal protection of civilians.

The apparent weakening of the blockade is cause for cautious optimism. But global civil society must continue to pressure governments to ensure that Israel — no more or less than any other country — be held accountable for its violations of international legal norms.

Stephen ZunesStephen Zunes, a Foreign Policy In Focus analyst, is a professor of politics and international studies at the University of San Francisco.