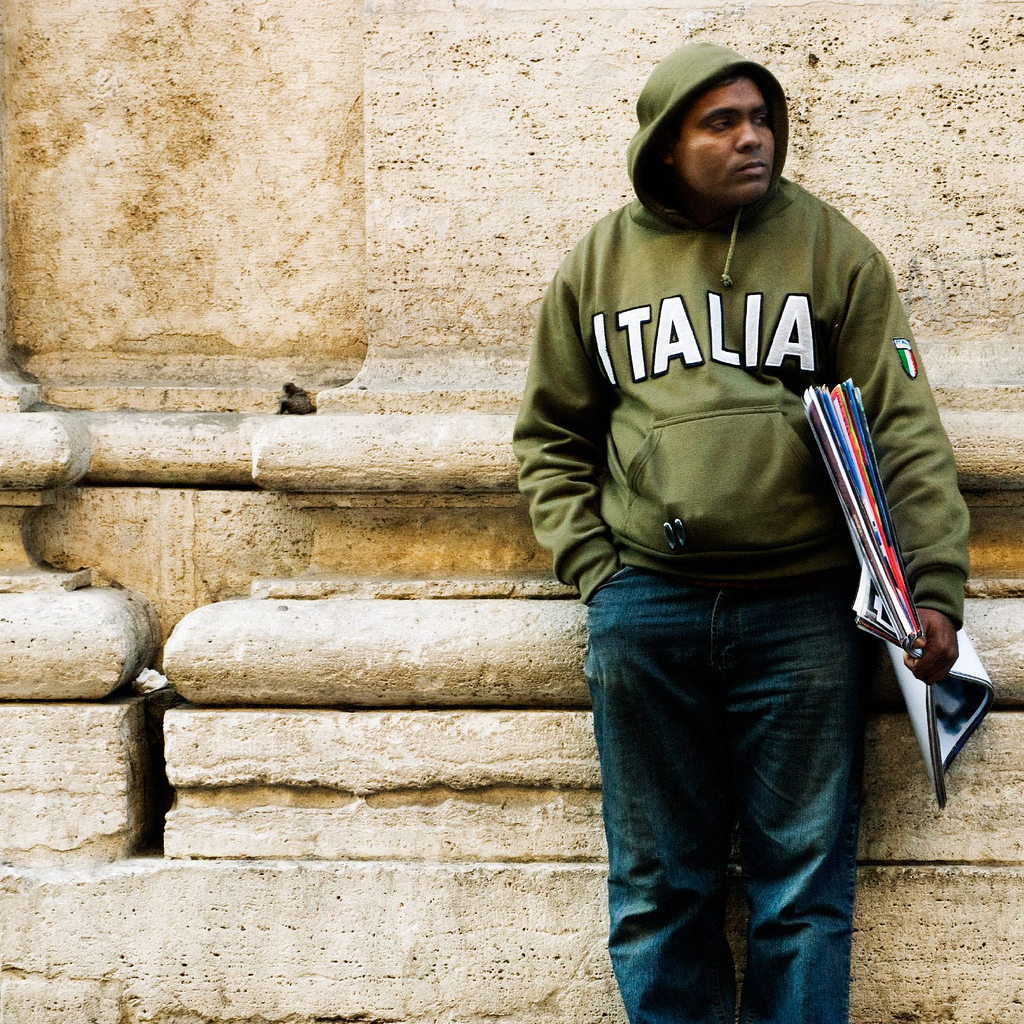 Italy’s Election Is All About Immigrants, and It’s Getting Ugly

Immigrants don't have one bit to do with Italy's ailing economy — in fact, they're key to reviving it.
By Conn Hallinan | February 22, 2018

Italian elections are always complex affairs, but the upcoming March 4 vote is one of the most bewildering in several decades: the right is resurgent, the left embattled, and the issue drawing the greatest fire and fury has little to do with the economic malaise that has gripped the country since the great economic crash of 2008.

These days predicting election outcomes in Europe is a fool’s game because the electorate is so volatile — a state one hardly can blame it for, given the beating people have taken from the almost decade-long policies of the European Union.

The organization’s rigid economic strictures for dealing with the debts incurred from the 2008 crisis — social service cutbacks, tax hikes, massive layoffs, and privatization — have sharply increased economic inequality throughout the continent and created a “lost generation” of young people: poorly educated, unemployed, and locked into low paying part-time jobs (if they manage to find one).

There has been a surge of right-wing parties throughout the EU, but the analysis that voters are turning right is too simplistic.

Voters in Germany did put the Nazi Alternative for Germany in the Bundestag, but mostly because they were fed up with the “stay-the-course” mainstream parties that offered them little more than austerity and more austerity. Dutch voters demolished their social democratic Labor Party, not because it was left, but because it was timidly centrist. Much the same was true for the French Socialist Party.

When center-left and left parties challenge austerity, voters reward them, as they did in Britain and Portugal. It’s not so much that the compass is swinging right, but rather that it is spinning.

The Italian elections are a case in point.

The Front Lines of the Refugee Crisis

Italy has one of the highest debt ratios in the EU, distressing unemployment figures — 11.4 percent nationally, and up to 36 percent among the young — a troubled banking sector, and a deteriorating infrastructure. Garbage — quite literally — is overwhelming Rome.

But instead of seeking solutions, most parties are talking about African and Middle East immigrants, a focus that is revealing an ugly side of the peninsula.

Hate crimes have risen 10-fold since 2012, and 20 percent of Italians admit to being anti-Semitic. The anti-fascist organization Infoantifa Ecn has recorded more than 140 neo-fascist attacks since 2014.

Italy currently plays host to some 620,000 immigrants — and since France, Austria, and Switzerland tightened their borders, those people are stuck in Italy. The EU has been little help. While Brussels was willing to shell out over $6 billion to Turkey to deal with the flood of immigrants generated by the wars in Syria and Yemen, Italy has been left to deal with the problem by itself.

A Cry in the Wilderness

Immigrants not only have virtually nothing to do with the crisis in banking, the slow growth of the economy, or the persistently high numbers of unemployed, they are a solution to a looming “apocalypse”: Italy’s extremely low birth rate, the lowest in the world after Japan.

Italian women give birth to 1.39 children on average, but the replacement ratio for the developed world is 2.1.

“If we carry on as we are and fail to reverse the trend, there will be fewer than 350,000 births in 10 year’s time, 30 percent less than in 2010 — an apocalypse,” says Italian Health Minister Beatrice Lorenzin. “In five years we have lost more than 66,000 births” per year, Lorenzin told La Republica — the equivalent of a city the size of Siena. “If we link this to the increasingly old and chronically ill people, we have a picture of a moribund country.”

A major obstacle to increased birth rate is that Italy has the second lowest percentage of women in the workforce in the EU, only 37 percent. The EU average is between 67 percent and 70 percent. An 80-euro a month baby bonus has flopped because many schools let out at noon and childcare is expensive.

The problem is EU-wide, where the average replacement ratio is only 1.58. The Berlin Institute for Population and Development estimated that Germany would need at least 500,000 immigrants a year for the next 35 years to keep pensions and social services at their current levels.

But Lorenzin’s warning is a cry in the wilderness.

Immigrants are a “social bomb that is ready to explode,” says former Italian Prime Minister Silvio Berlusconi, whose right-wing Forza Italia Party is in coalition with the xenophobic Northern League and the fascist Brothers of Italy. The coalition is currently running in first place, with about 36 percent of the vote. “All these migrants live off of trickery and crime,” he told Canale 5, a station he owns.

Not to be outdone by Berlusconi, Giogia Meloni of the nationalist Brothers of Italy party calls for a “naval blockade” and “trenches” to ward off migrants. Meloni launched her campaign for prime minister in Benito Mussolini’s city of Latina, and the late dictator’s granddaughter is a party candidate.

Matteo Salvini, the Northern League’s candidate for prime minister, kicks it up a notch: immigrants, he says, bring “chaos, anger, drug dealing, thefts, rape, and violence,” and pose a threat to “the white race.”

The idiosyncratic Five Star Movement — polling at 28 percent — is less bombastic, but it has taken to immigrant bashing as well. Its candidate for prime minister, Luigi Di Mario, also calls immigrants a “social bomb,” and the party was conspicuously silent when a neo-fascist recently gunned down six African migrants in the town of Macerata.

The center-left Democratic Party was initially open-armed to immigrants, but it has since pulled up the welcome mat and started returning refugees to Libya.

Italy is very much a country of regions: a prosperous north, a generally well-to-do center, and an impoverished south.

Five Star is doing well in the south, but so is Berlusconi’s coalition. Five Star’s call for a minimum wage is popular in Calabria, Puglia, Basilicata, and Sicily — the so-called Mezzogiorno macro-region of the south — but Berlusconi won last spring’s elections in Sicily, just edging out Five Star.

The Northern League — which is polling at around 15 percent — has dropped “Northern” in an effort to appeal to voters in central and south Italy, but the latter are not likely to cast ballots for Salvini. Up until recently Salvini routinely referred to southerners as “terroni,” a derogatory term. Southern Italians have long memories.

Left on the Rocks

It is the left and center-left that is in trouble.

Former Prime Minister Matteo Renzi’s wing of the Democratic Party moved to the center, and is now paying the price for that maneuver. While critical of the EU’s austerity policies, the party nevertheless implemented them, bailed out banks, and did little about joblessness. The Democratic Minister of Labor, Giuliano Poletti, encouraged unemployed young Italians to emigrate “rather than get under our feet,” not a comment likely to endear the party to the young.

The Democratic Party is not xenophobic like Five Star and Berlusconi’s coalition, but neither is it willing to directly challenge the myths around immigration. The party is allied with the Free and Equal party, representing the left of the Democratic Party, but the party is brand new and it is not clear how well it will poll.

There is, as well, a center to center-left coalition of eight parties built around the Popular Civic party and its candidate, Health Minister Lorenzin. But Popular Civic is also a new party, and how it will do March 4 is uncertain.

There is also a new electoral law that combines proportional representation with first-past-the-post results, and it is not clear how that will translate into seats in the 630-seat Chamber of Deputies and 315-seat Senate. A party needs 3 percent to be represented in the parliament.

It is doubtful that anyone will “win” outright. Five Star may get the most votes, but it will have to ally itself with another party to form a government. In the past it has rejected doing so, but it’s recently moderated its opposition to joining with another party — possibly the Northern League.

Berlusconi’s coalition might take the largest number of votes, but enough to win a majority? If the South goes Forza Italia rather than Five Star, maybe. There is a caveat here: right-wing parties tend to do better at the ballot box than they poll.

Forza Italia has positioned itself as the defender of the EU against the “populists” of Five Star, but most of the anti-EU parties — Five Star included — have trimmed back their threats to withdraw from the Union or abandon the euro currency.

In the end it might be a hung government, and “fractious” would be an understatement. Whoever comes out on top will still have to tackle the underlying crisis, on which immigration has no bearing.

The central problem is the economic policies of the EU, whose austerity-driven solutions are costing the organization support. Only 36 percent of Italians have a favorable opinion of the EU, and that viewpoint is not restricted to Italy. Faith in the EU has fallen from 38 percent to 32 percent in France.

As for the immigrants: Not only are they not the problem, they are a long-term solution to Italy’s — and the EU’s — looming demographic crisis.