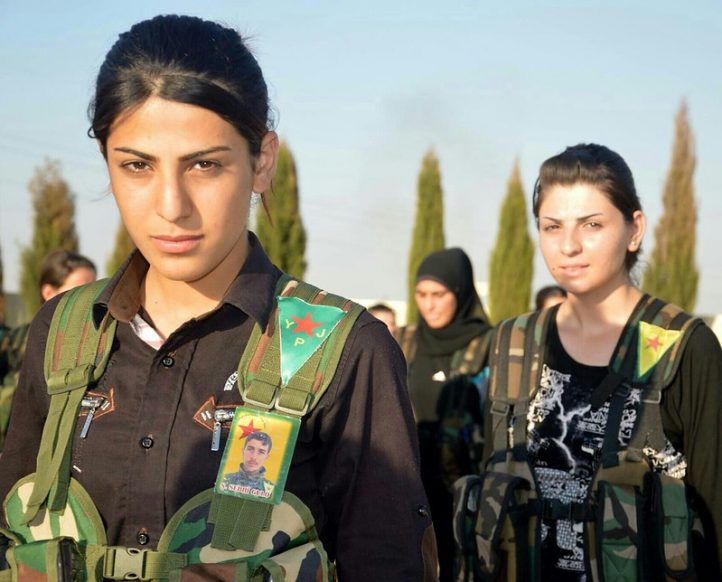 As Turkey continues its devastating military assault on Rojava, the Kurdish-led region of northeastern Syria, officials in Washington are facing a critical decision: allow Turkey to prevail in its campaign of ethnic cleansing against the Kurds or take action to protect them.

The Turkish invasion, which began on October 9, has been devastating for Rojava. According to the United Nations, nearly 180,000 people, including 80,000 children, have been displaced. At the start of the attack, Turkish officials announced that Turkish-led forces had killed more than 200 Kurdish militants. About a week later, Kurdish officials said that more than 200 civilians had been killed.

After gathering witness testimony, Amnesty International reported that Turkish forces and allied militias had committed war crimes. They “have displayed a shameful disregard for civilian life, carrying out serious violations and war crimes, including summary killings and unlawful attacks that have killed and injured civilians,” the human rights organization said.

Speaking before Congress, James Jeffrey, the Trump administration’s special envoy for Syria, acknowledged that “we’ve seen several incidents which we consider war crimes.” He cited the killing of Kurdish politician Hevrin Khalaf and the killings of several defenseless Kurdish prisoners by Turkish-allied militias.

When the Turkish-led forces began their invasion, it was clear that they intended to cleanse the area of its Kurdish population. For years, Turkish President Recep Tayyip Erdogan has been threatening to drive the Kurdish people out of the area, having directed a similar campaign in Afrin in early 2018.

“We are witnessing ethnic cleansing in Syria by Turkey, the destruction of a reliable ally in the Kurds, and the reemergence of ISIS,” Senator Lindsey Graham (R-SC) tweeted days into the invasion.

What has made the attack particularly egregious is the fact that the Kurds are allies of the United States. For years, the Kurdish-led Syrian Democratic Forces (SDF) have been working with the U.S. military to fight and defeat the Islamic State in Syria. According to U.S. officials, the Kurdish-led forces have been the most effective fighters on the ground in Syria.

“These were an ally and a very good ally against ISIS, a very effective ally that lost over 10,000 people killed,” Jeffrey noted.

President Trump, who endorsed and facilitated the Turkish attack by withdrawing U.S. forces, defended Turkey’s actions, arguing that the country faced a terrorist threat from the Kurds. Turkey “had to have it cleaned out,” Trump said, referring to the Kurdish-led area along the Turkish border.

Democratic and Republican leaders strongly condemned Trump’s actions, accusing the president of betraying U.S. partners. In several congressional hearings, multiple officials from both political parties blasted the president for opening the door to Turkey’s ethnic cleansing of the Kurds.

“The president of the United States gave a thumbs up to an act of ethnic cleansing,” Congressman Andy Levin (D-MI) said.

Gerry Connolly (D-VA) commented that “the abandonment of the Kurds is one of the most shameful things I’ve seen in over 40 years of association with American foreign policy.”

Although U.S. officials are correct to condemn Trump for betraying the Kurds, they have been downplaying several additional factors that led to the crisis. Since March 2018, when Trump first attempted to abandon the Kurds, the U.S. foreign policy establishment has been trying to appease the Turks and exploit the Kurds in the Syrian Civil War. The U.S. foreign policy establishment did not prepare to keep the Kurds safe, as several officials promised to do.

U.S. attempts to appease the Turks have been a complete failure. In the months before the Turks invaded, U.S. officials encouraged the Kurds to remove their defensive weapons and fortifications from the Turkish border. These actions cleared the way for the Turkish invasion.

“In tearing down those defenses, it left the Kurds much more susceptible to the inevitable attack that came,” Senator Chris Murphy (D-T) said.

Nor did U.S. officials devise a plan to protect the Kurds. They remained focused on exploiting Kurdish control of northeastern Syria as leverage in political negotiations with the Syrian government over the future of Syria.

The month before Turkey launched its invasion, the Syria Study Group (SSG), a special study group convened by Congress, issued a report arguing that “the United States can still influence the outcome of the Syrian war,” in part by maintaining U.S. forces in northeastern Syria and leveraging Kurdish control of Rojava.

“The reason the Syria Study Group talked about needing to retain a U.S. military presence in that one third of Syria was not only about completing the anti-ISIS fight, it was about the broader leverage of that one-third of Syria,” SSG Co-Chair Dana Stroul told Congress. That “is the resource rich part of Syria, which provided us leverage to influence a political outcome in Syria.”

These moves have proven disastrous to the Kurds. Not only has the U.S. foreign policy establishment failed to deter a Turkish attack, but it has created a situation in which the Kurds sought help from the Syrian government. As the Turks began their attack, the Kurds invited Syrian government forces into Rojava, working with them to deter additional attacks.

Perhaps most remarkable, the U.S. foreign policy establishment has not changed its strategy. Despite the fact that Turkish forces are now occupying parts of Rojava and Kurdish allies have turned to Syria for protection, U.S. officials still think they can use the Kurds as leverage against Syrian President Bashar al-Assad.

“My instructions from Secretary Pompeo from day one…was to act to counter Russia’s effort in the Syrian conflict to obtain a military victory for Assad and his Iranian henchmen,” Jeffrey explained. “And that’s what I was doing every day and that’s what my orders remain to do, at least on the Syrian account.”

To prevent the Russians from helping Assad exert additional control over Rojava, the Trump administration is moving hundreds of U.S. military forces into its oil-rich areas, trying to use them as leverage.

Certainly, there are alternatives to these imperial tactics. The simplest and most obvious thing would be for U.S. officials to take into account Kurdish preferences.

At the most basic level, U.S. officials should support the political aspirations of the Kurds, who are trying to create an autonomous region inside Syria. Over the past several years, the Kurds have been leading a leftist social revolution in Rojava, creating a society of “democratic federalism” rooted in the values of ecology, feminism, and direct democracy.

According to Senator Jeff Merkley (D-OR), there has been “a lot of implicit support for supporting the Kurds in the vision that they were carrying,” but U.S. officials have yet to publicly endorse the Kurdish project.

A related option would be for U.S. officials to fulfill their promises to allow the Kurds to participate in negotiations with the Syrian government. Kurdish participation would enable the Kurds to make their case for creating an autonomous region inside Syria.

Another option would be for international forces to work with the Kurds to deter future attacks. U.S. military forces already maintain control of the airspace over northeastern Syria. U.S. forces could enforce a no-fly zone, preventing the Turks from launching aerial attacks. At the same time, international peacekeepers could replace U.S. forces on the ground, patrolling the region to deter future attacks.

“Let’s be clear: this is intentioned-laced [sic] ethnic cleansing,” U.S. diplomat William Roebuck, the top U.S. diplomat on the ground in Syria, noted in an internal memo. “It is a war crime, when proven.”

Ultimately, the Turkish attack on Rojava should have never happened. The U.S. foreign policy establishment knew all along that Trump would betray the Kurds, that Turkey would not be appeased, and that the Kurds would turn to Assad out of desperation.

“We had long known that Turkey was preparing for this thing,” Jeffrey acknowledged. “Turkey had had troops in place actually for almost a year and had been threatening to do this.”

Fortunately, there is time to turn things around. The Kurds lost over 10,000 people in the war against the Islamic State and still manged to create one of the most promising democratic experiments in the Middle East. They deserve U.S. support.