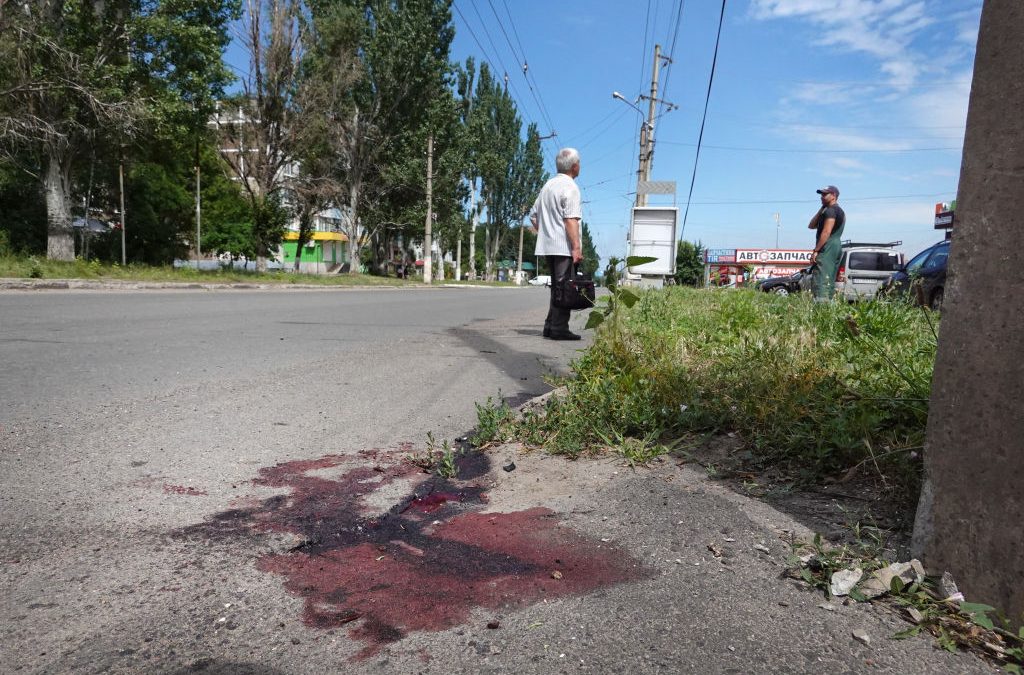 Blood runs down the road after several people were wounded in a cluster bomb attack near a grocery store on June 30, 2022 in Sloviansk, Ukraine. (Photo by Scott Olson/Getty Images)

It’s Time for the U.S. to Ban Cluster Munitions

With the horror of these weapons is on full display in the Russia-Ukraine war, the U.S. needs to sign the global ban.
By Mary Wareham | September 15, 2022

The couple were in their yard cooking a meal. Then the submunitions hit.

The wife died instantly. The husband lost both legs and died that day during surgery.

The Russian attack was just one of dozens to hit Derhachi, a town in the Kharkiv region of Ukraine, in May and June. The cluster munitions struck homes and gardens, streets and parks, hospitals and a cultural center.

But Russia is an outlier. Cluster munitions have a well-deserved reputation as deeply problematic and widely stigmatized weapons. The 2008 treaty to prohibit them and destroy existing stocks has been ratified by 110 countries and signed by 13 more. In all of 2021, there wasn’t a single recorded cluster munition attack.

Now is the time for the U.S. to join the treaty.

The problem with cluster munitions is that they not only kill but keep on killing. Fired from the ground by artillery, rockets, and mortars, or dropped by aircraft, they typically open in the air to disperse multiple bomblets or submunitions indiscriminately over a wide area. Many submunitions fail to explode on initial impact and remain dangerous duds that, like landmines, can kill and maim for years until they’re cleared and destroyed.

Preliminary data shows at least 689 civilian casualties from Russia’s cluster munition attacks in Ukraine between February and July 2022. Ukraine has not denied credible evidence that it has also used cluster munitions several times in the current conflict. Neither country is a party to the international treaty banning cluster munitions.

According to Cluster Munition Monitor 2022, released this August, there have been no confirmed reports or allegations of new use, production, or transfers of cluster munitions by any party to the convention since it was adopted. There’s also no evidence to suggest cluster munitions, as defined by the convention, have been transferred among the artillery, rocket systems, and other weapons that the Ukrainian government has received from third parties in 2022.

The lack of cluster munition transfers to Ukraine reflects that three-quarters of NATO member countries have banned these weapons. It also shows that countries that have not joined the treaty are quietly taking significant steps to align their policies with the strict standard set by the convention’s prohibitions, including on assisting with any banned activities.

The United States is a case in point. The Department of Defense says that cluster munitions provide “a vital military capability,” but U.S. forces have not used them since the 2003 invasion of Iraq, with the exception of a single attack on Yemen in 2009. The last U.S. production of cluster munitions was in 2016.

Despite these steps, the United States has not acceded to the Convention on Cluster Munitions and largely ignores its existence. A November 2017 policy directive allows the U.S. military to continue to use, acquire, and stockpile millions of unreliable cluster munitions in existing stocks.

The U.S. stance on cluster munitions stands in stark contrast to its June 2022 policy committing not to produce antipersonnel landmines and not to use them outside the Korean peninsula. The new policy says that the “ultimate” goal is for the U.S. to ratify the 1997 Mine Ban Treaty.

In April, a group of 27 members of Congress decried Russia’s use of cluster munitions, calling them “barbaric and indiscriminate weapons.” They also criticized current U.S. policy on cluster munitions as “wholly unacceptable given what we know about the immediate and long-term damage done to societies on which they are deployed.” The congressional representatives appealed to President Joe Biden “to take all the necessary steps to join the Convention on Cluster Munitions.”

The convention is the only international legal framework explicitly dedicated to eradicating these weapons — and U.S. participation would significantly boost its standing. A U.S. ban on cluster munitions would also go a long way toward repairing the legacy of harm caused by past U.S. production, transfers, and use of these weapons.

And this is the time, while the world is watching the death and destruction from cluster munitions in Ukraine with horror.

Mary Wareham is the arms advocacy director at Human Rights Watch and the editor of Cluster Munition Monitor 2022.