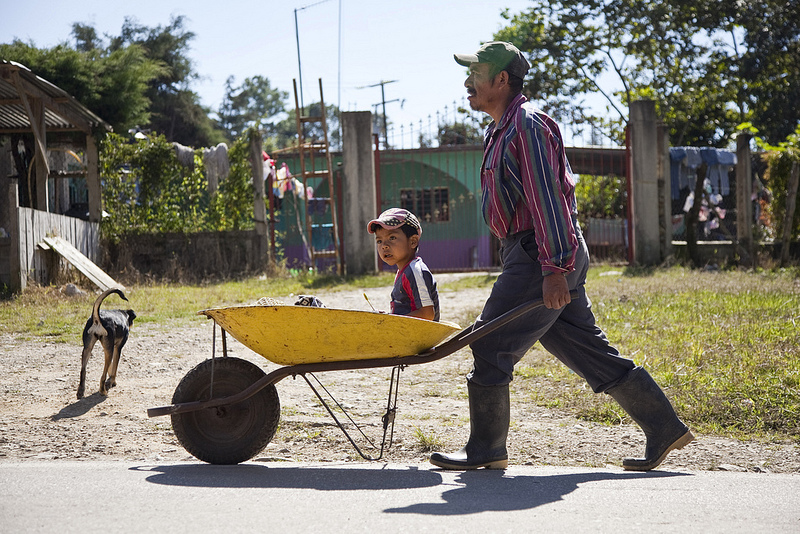 NAFTA opened the doors for a flood of subsidized agricultural products and large-scale consolidation, eviscerating small farmers on both sides of the U.S.-Mexico border. (Photo: Bread for the World / Flickr)

It’s Time to Scrap NAFTA, Not ‘Tweak’ It

Donald Trump seems to think Mexicans made out like bandits from NAFTA. In reality, workers in all three NAFTA countries have suffered.
By Victor Suarez, Alejandro Villamar | February 24, 2017

In a recent appearance with Canadian Prime Minister Justin Trudeau, Donald Trump promised that “we’re going to tweak” the North American Free Trade Agreement, or NAFTA, because of its “severe” impacts on U.S.-Mexico trade relations. But the real impacts of the agreement run much deeper than a trade deficit.

Some politicians and “experts” still don’t understand — or don’t want to understand — that a great deal of popular discontent in the United States, Mexico, and Canada alike is rooted in undemocratic policies that have produced inequality, unemployment, migration, food dependency, and pollution. NAFTA isn’t the only factor — but it’s one of the most powerful.

The reason is that NAFTA was never designed for the development of our peoples through trade, but instead to advance the narrow corporate interests of multi-national firms and the governments that serve them. In the case of Mexico, it was negotiated and signed by an authoritarian government that only served the interests of large Mexican and global corporations, and which turned its back on productive sectors linked to the domestic market.

NAFTA was once boosted as a democratizing force for Mexico. Though Mexico’s traditional ruling party did lose a few presidential elections, the continued involution and deterioration of the Mexican political system since 2000 has put lie to the claim that NAFTA was going to spur meaningful democratization.

Yet Donald Trump would have us believe that Mexicans have made out like bandits from NAFTA, robbing middle-class jobs from the United States. Instead, more than 60 million Mexicans — more than half of the total population — live in poverty, exposing Trump’s deceptive claims as propaganda.

Almost one million small and medium-level entrepreneurs in Mexico were ruined by NAFTA’s rules of competition, which were written in favor of big transnational corporations, and by the lack of internal support policies for displaced workers and owners. Millions more there were once middle class and thought that with NAFTA they had a prospect of social advancement, but now they’re approaching poverty, too.

In all three countries, NAFTA has meant a downward standardization of wages, labor rules, and environmental standards affecting workers and farmers across each border. Just as many American farmers and workers saw their incomes decline and jobs vanish under NAFTA, millions of Mexicans similarly watched as their economic lot in life grew unbearable.

NAFTA forced the abandonment of the countryside by the Mexican government, effectively expelling millions of peasants who emigrated to the United States and opening the doors to the growth of the narcotics trade — and hence to the control of vast rural territories by organized crime.

Social organizations and networks in Mexico have monitored the results of NAFTA for over two decades now. And in a trinational alliance with our U.S. and Canadian counterparts, we’ve evaluated and constructed alternatives based on fair trade and cooperation, where human rights and respect for the environment are priorities.

Of course, NAFTA has been successful for a few industries in the three countries, but not for the majority of ordinary people. Nor has it been beneficial to our common and unique ecosystems. To “tweak” the agreement is, once again, to peddle the deception of “change so that nothing changes.”

It’s time to replace NAFTA, not to renegotiate it with the same corporate-friendly premises of the TPP. It’s time to think about the interdependence and legitimate interests that exist between our peoples, not perpetuate of the narrow mercantile and financial interests that prevailed in the design and operation of NAFTA.

Ing. Victor Suarez is a representative of the National Association of Peasant Enterprises (ANEC). Dr. Alejandro Villamar is a member of the Mexican Action Network on Free Trade (RMALC).