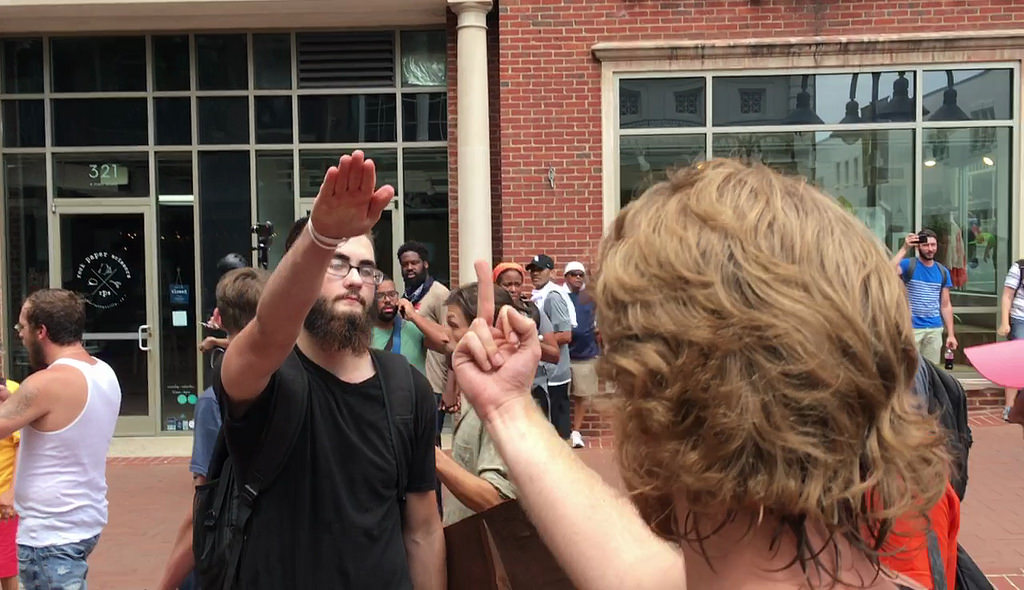 The slide towards bleak historical periods can be difficult to recognize in the moment. But in this moment, it's glaringly obvious.
By Adil E. Shamoo, Bonnie Bricker | August 23, 2017

The slide towards bleak historical periods can be difficult to recognize in the moment — often it only seems obvious in retrospect. But it’s hard to miss in the U.S. in this early part of the 21st century.

Dangerous signs are everywhere. In the New Yorker, Robin Wright writes of a coming Civil War. Holocaust survivors are issuing warnings about the similarities of this period to the rise of the Nazi era.

While no two events are the same, there are lessons and events in history that can be used to shine a light on the present. Those lights, if we choose to follow them, can guide us to avoid the tragic errors of the past.

The presidency of Donald J. Trump, hoisted on the shoulders of white supremacists, is a glaringly dangerous period for our country. It’s important to recognize this dangerous mix of moral turpitude, dereliction of duty, and incompetence before we fall deeper into fascism and moral tragedy.

There are some similarities between both Hitler’s and Trump’s rise to power.

For starters, both rose to power with minority support. The Nazi party received just 3 percent of the vote in the 1924 parliamentary election; in the 1933 election, the party won 33 percent of the votes. At his peak, Hitler managed to muster just 39 percent. (Contrary to myth, he never won a popular election outright.)

Trump took over the Republican Party with a similar style of demagoguery and dumb luck, ultimately winning the presidency with 3 million fewer votes than Hillary Clinton due to the arcane Electoral College process.

Likewise, both Hitler and Trump used decrees as a tool for consolidating authoritarian powers and disorienting the opposition. Trump’s continual issuance of executive orders, starting from the first days of his presidency, has served to not only subvert the normal legislative process, but to destabilize opposition by scattering the efforts of the left. By comparison, Hitler issued more than 400 decrees against Jews over a six-year period, in a constant and brutal decimation of rights, and ultimately, lives.

Trump’s recent move to try to compel the Department of Justice to seize 1.3 million IP addresses on a Trump protest site’s visitor logs is just the most recent nibble at the rights of his opposition. The department was forced to back off that request under pressure, but more efforts will follow.

Both Hitler and Trump have used bullying and threats to keep government officials in line. Nazi supporters intimidated, beat, and assassinated some of their opponents. Trump is no Hitler — not yet — but he’s turned his Twitter account into an intimidation tool and managed to keep the majority of his party in line with him, even with neo-Nazis chanting “Heil Trump” in the streets.

Where Hitler manipulated weak top officials by joining the conservatives to win the majority in parliament, Trump has co-opted GOP leaders by allowing some to call the shots on their favored foreign and domestic policies.

What were the conditions that brought us to a Donald Trump presidency?

First, Republicans systematically weakened the labor class and their unions with a relentless dismantling of many of their hard-fought rights, beginning in the 1980s during the Reagan administration.

Second, the Democratic Party took labor for granted. During the Clinton administration the ill-conceived North American Free Trade Agreement was signed in 1993, and the World Trade Organization (WTO) was formed in 1995. While both garnered support as a means for more U.S. jobs, the reality was a loss of jobs or a decline in wages for many, causing hourly labor wages to decline from $40-50 to $10-15 an hour in some sectors.

Democrats continued on the same path during the Obama administration, pushing new and even more ambitious trade pacts like the Trans Pacific Partnership.

The result of this decades-long assault? Millions have moved from the middle class to lower middle class and into poverty, while upper corporate executives and stockholders reap the rewards. Is it any wonder that disaffected Democrats moved away from their party?

In his 2004 campaign for president, candidate Howard Dean (full disclosure: one of us privately worked for his campaign in Maryland) recognized the rising anger among the poor and lower-middle class at forces beyond their reach. Dean described his approach in 2003 by saying that he wants to be a candidate for the “guys with Confederate flags in their pickup trucks.” The corporate media widely panned his description, and yet Dean’s remark predicted Trump’s rise in this last election.

Later, Barack Obama pointed out that same group of Americans at a private campaign fundraiser in California in 2008, albeit in more disparaging terms. “They get bitter, they cling to guns or religion or antipathy to people who aren’t like them or anti-immigrant sentiment or anti-trade sentiment as a way to explain their frustrations,” Obama suggested, seemingly embodying the exact sort of condescension these voters suspected top Democrats of harboring for them.

Recognized but not addressed, these groups fled the Democrats who failed to acknowledge the degradation of jobs and lives for a large swath of America. Many ran right into the arms of a demagogue.

Yet recent events prove that it’s not just economic inequality that threatens the foundations of our society. Also to blame is a resurgent white nationalist movement that’s been emboldened by this administration’s refusal to condemn it. Charlottesville was ground zero in a clash of fascism versus movements for equality, peace, and justice.

Yet for traditionally minded Americans, including many conservatives, seeing the home of Thomas Jefferson overrun by Nazi symbols can be a catalyst for change — if more Republicans find their moral courage and Democrats develop a consensus to begin to address the needs of Americans who have been forgotten.

Trump’s impromptu news conference on August 14 exposed a president denuded of any principles and knowledge of our history. Extolling racism and favoring fascism, Trump solidly demonstrated his unwillingness to change. A few Republicans have begun to publicly express their repugnance, notably Senators Lindsey Graham, Jeff Flake, and Bob Corker. Corker gave perhaps the strongest statement, declaring, “The president has not yet been able to demonstrate the stability nor some of the competence that he needs to demonstrate in order to be successful.”

Where are the rest? Heather Heyer, the young woman who died in Charlottesville when she was mowed over by a fascist terrorist, had more courage in her convictions than any of Trump’s miserable looking staffers and congressional cronies.

The great enablers of Trump must be exposed for their immorality and lack of courage. More members of the Republican Party must gather their courage and come together with Democrats and independents to hold Trump and his lackeys accountable. Meanwhile, progressives need to come up with a compelling left populist alternative to the far right’s racially tinged fascism.

The signs are evident, and the time is now, before it is too late. We have no time to waste.

Adil E. Shamoo is an associate fellow of the Institute for Policy Studies, a senior analyst for Foreign Policy in Focus, and the author of Equal Worth — When Humanity Will Have Peace. Download a free copy at www.forwarorpeace.com. His email is ashamoo@som.umaryland.edu.

Bonnie Bricker is a contributor to FPIF.