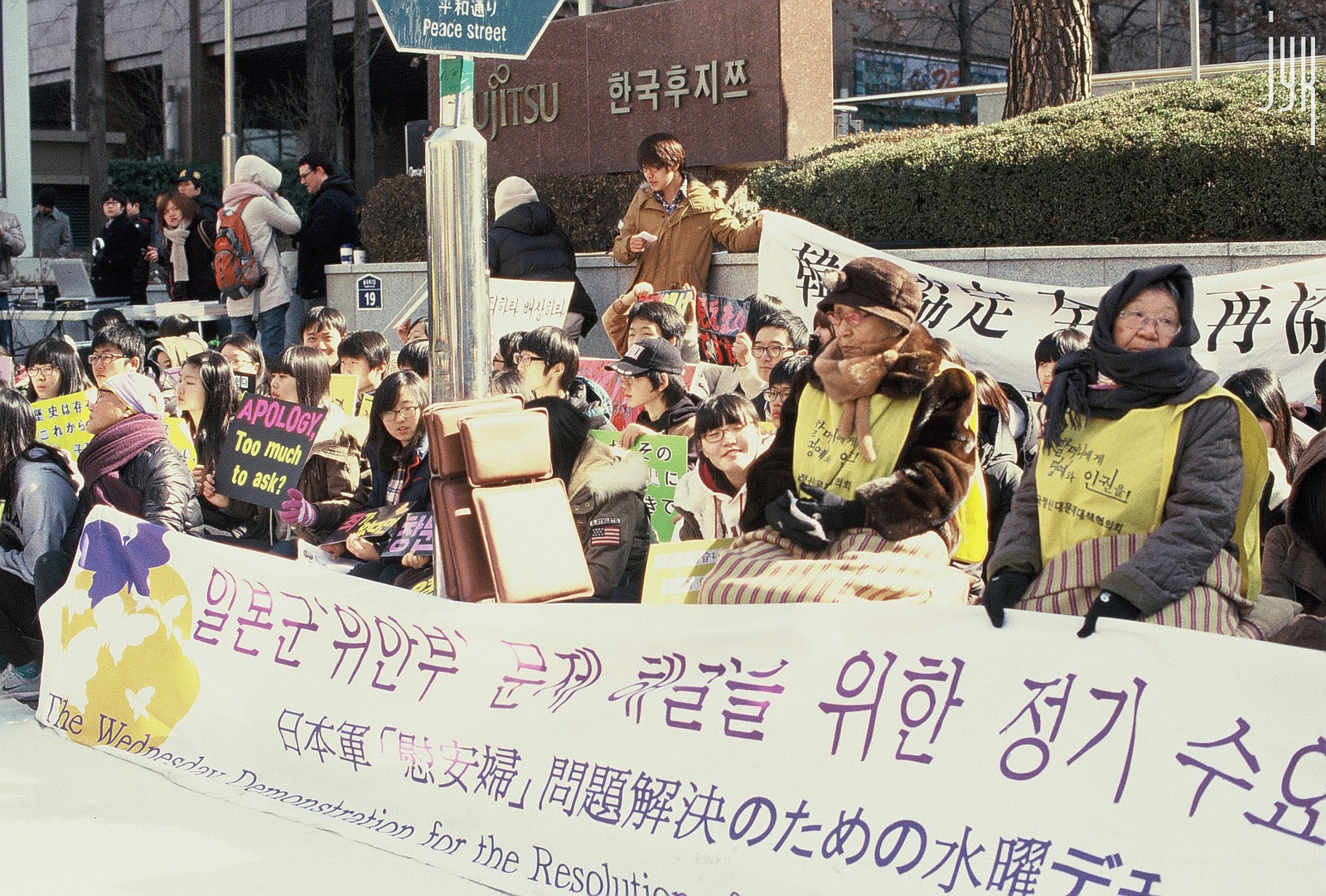 Japan Is Antagonizing Everyone

Japan’s war hawks and imperial apologists are alienating the country’s allies and making a confrontation with its rivals more likely.
By Kaja Baum | November 19, 2014

Despite this ugly history, the United States and Japan are now staunch allies and trade partners with a shared love of sushi. However, for Japan’s neighbors in China and Korea—the former subjects of an aggressive Japanese empire in the Pacific—deep wounds remain open, and relations are still chilly.

After over a half century, the biggest powers of East Asia still can’t get along. Even as Japan and Korea face a shared challenge from a rising China, their troubled history is precluding meaningful cooperation with each other. And with the United States less likely to assert itself in the region in the years to come, rising nationalism on all sides is increasing the likelihood of new confrontations.

Many of these conflicts are playing out in theaters large and small—including among elderly Korean ladies, shrines to war dead, and Japanese schoolbooks.

A small group of Korean women and their supporters gather every Wednesday in front of the Japanese Embassy in Seoul. They have done so without fail since 1992, even as their numbers have dwindled—their ages average 88 years. These victims of wartime sexual trafficking, often called “comfort women,” are protesting the Japanese government’s failure to sufficiently recognize and atone for the sexual slavery of an estimated 200,000 mostly Korean women during World War II.

The Japanese government denied these charges for many years. But proof from Japan’s own Defense Ministry documenting the government’s management of brothels—or “comfort stations” —for Japanese soldiers forced Japan to acknowledge the mass human trafficking and government-sponsored rape of women by the Imperial Army. Issued in a proclamation called the Kono Statement, this acknowledgment—while historic—offered no concrete path for atonement or reparations.

Earlier this year, the United Nations Human Rights Committee issued a statement calling on Japan to “ensure that all allegations of sexual slavery or other human rights violations perpetrated by Japanese military during wartime against the ‘comfort women’ are effectively, independently, and impartially investigated and that perpetrators are prosecuted and if found guilty, punished.” As Jeff Kingston, director of Asian Studies at Temple University in Tokyo, explains, “Japan needs to keep apologizing, making gestures of contrition, and seeking a fuller understanding of its shared past with Asia.”

Instead, however, Japanese Prime Minister Shinzo Abe has backpedaled by trying to deny and downplay the issue. He has threatened to revise the Kono Statement, claiming there was no actual proof of forced prostitution—a threat that triggered a wave of outrage and international condemnation. Other Japanese politicians have piled on with even more egregious statements, such as the claim by Osaka mayor Toru Hashimoto that the sexual slavery was a “necessary” wartime measure that “anyone can understand.”

But comfort women are far from the only wartime legacy that Abe has aggravated.

Last December, Abe visited the war cemetery at Tokyo’s Yasukuni Shrine. The shrine memorializes the 2.5 million Japanese killed in wartime—including, controversially, 14 Class-A war criminals responsible for such atrocities as the Rape of Nanjing and the attack on Pearl Harbor.

Before Abe’s visit, no Japanese Prime Minister had stepped into the political minefield of the shrine for seven years. The visit occurred at a particularly tense moment in Japan’s relations with China—just after Beijing’s announcement of a new Air Defense Identification Zone for the East China Sea. In his visit to Beijing following the announcement, U.S. Vice President Joe Biden declined to criticize China’s declaration—despite having just told Tokyo that “the United States firmly backed Japan’s opposition to China’s actions.” Following Abe’s visit to Yasukuni, Beijing “shut the door to dialogue.”

Finally, as though in a grand provocative finale, Abe’s government is literally rewriting the history of the war for future generations. Textbooks around the country are now being changed to reflect a more “patriotic” view of Japanese history. Education minister Hakubun Shimomura says that the new material will “teach a balance of good as well as the bad parts, so that children can be proud of and have confidence in our country’s history.”

A “balanced” view of wartime history apparently entails adhering to Abe’s insistence that there’s no proof the comfort women were coerced, and downplaying the death toll of the “incident” at Nanjing. These attempts, as the New York Times put it, to “recast wartime history with a less apologetic tone” have resulted in Japan effectively pulling the rug out from under its regional diplomacy, reneging on its past admissions and apologies, and endangering its relationships with its neighbors.

This is where matters get vastly more interconnected and consequential.

Tokyo’s ongoing failure to make, in the eyes of its victims, satisfactory amends for past transgressions has poisoned the narrow seas that divide Japan from its neighbors. As China increasingly asserts its influence in the region, and as the U.S. “pivot to Asia” falls flat on its face, these seemingly isolated squabbles could pose a serious threat.

While U.S.-Japan relations are still strong, Japan now recognizes that the United States can no longer wield the influence it once did in the region. Abe’s response has been to loosen the leash on Japan’s military, to permit its “Self Defense Forces” to defend Japan’s allies and act as a “security counterbalance” to China’s rising military power. Yet under the guise of warding off Chinese antagonism, Japan’s hawkish government is antagonizing everyone.

There are certainly other matters to be attended to within the region, such as territorial disputes in the East and South China Sea. Yet many of these problems stem from, or are fueled by, Japan’s growing insecurities. Abe should be finding ways to rebuild bridges and form stronger relationships with Japan’s neighbors, particularly South Korea.

Tokyo holds that all war reparations on issues such as comfort women were settled in 1965—when diplomatic ties were established with South Korea—and many Japanese feel that their country has done enough apologizing and guilt tripping for events long past. While it is important to expect that, as Nancy Snow observes, “regional rivals will take every ideological advantage of Japanese missteps, raising hackles about Japanese militarism,” it still behooves Abe to make every gesture he can afford to attempt to clean the slate. Japan has the power to gain a far more positive and favorable image, at a reasonably low cost, by addressing such issues as comfort women, the Yasukuni Shrine, and school books.

History can’t be unmade, but it needn’t determine the future either. As South Korean President Park Geun-hye has said, “The Japanese government must make a right and bold decision for the two countries to overcome a painful past… They should stop denying the past and face the truth of history. Otherwise, they will be isolated.” If the wounds from Nagasaki, Hiroshima, and Pearl Harbor can be mended into what is now a strong alliance, the Japanese government can do some mending here too.